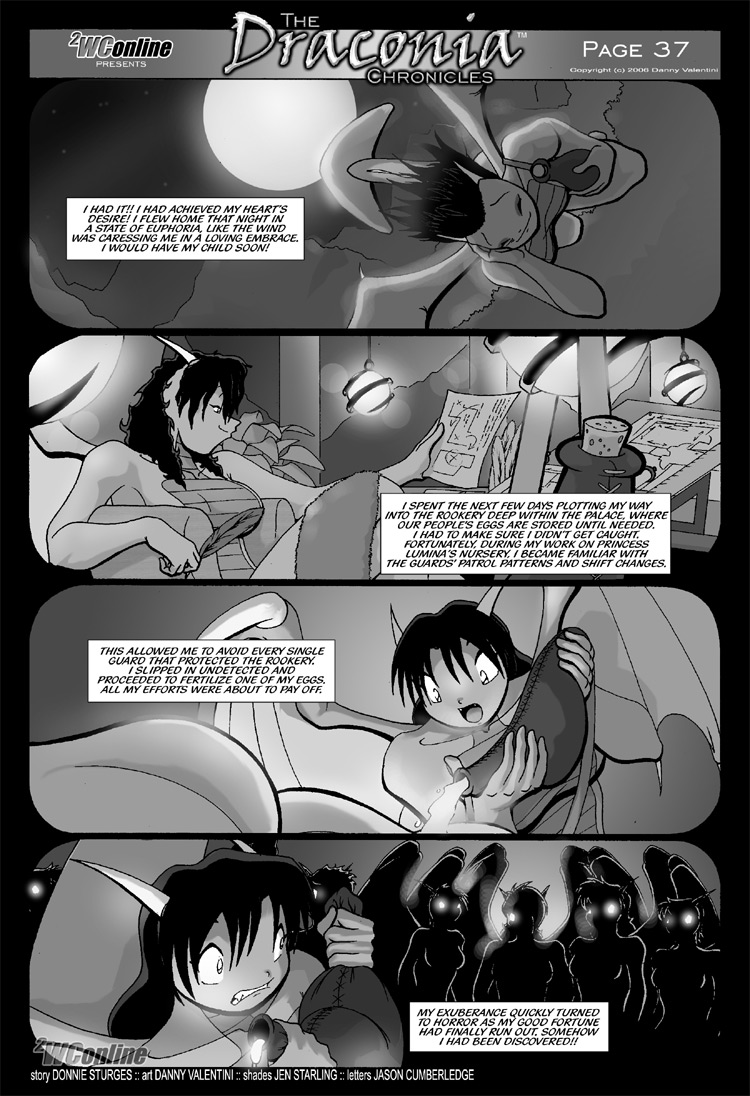 Way to not want to have fun smashing stuff yuki. Also great view in the last frame…. 😉

Well dip me in hot sauce and fry me with bacon. You’re right !!!
Hope he wont miss it….

sounds tasty, can I have some

ME FIRST ME FIRST!!!!
(EDGE KNIGHTS uses ME FIRST its super effective!!!)

Now now, there’s plenty to go around.
BTW you might want to take a look at you diet.
Too much fat isn’t good for you.

No i’m simply stating that a diet with too much fat (me for example) is not good for your health. Plus canibalism is not very accepted in todays community. I will be more clear in the future. Carry on 🙂

Not that I don’t like the fan service, but I hope that the epic final fight is more focused on the fight itself than the bodies of the girls.

Nice to know what you’re focused on. :-

Seriously tho, none of this comic was made with fan service in mind. I mean we can’t really help that the girls look the way they do. Well I guess we could a little, but little late for that. However, I have to ask how do we make the fight look good, without making the girls look good while they fight? I mean none of them are gonna be running around all dainty like, pulling hair, and tossing about in random mud patches or anything.

“I mean none of them are gonna be running around all dainty like, pulling
hair, and tossing about in random mud patches or anything.” Awwwww!! Can we get that as a bonus page, though? XD

Everything has been fine in my opinion. Fan service hasn’t been thrown out like candy at a Halloween parade and that makes the little there is, intentional or not, so much more awesome.

hmm girls in battle never meant to look good mihari only winning and doing the heroic pose after the battle, what it meant to look good after the fight, during battle you only want to win and defeat the villain, and so long you dont have a wardrobe malfunctions during a fight

T_T… When I said look good, I meant how they are presented in battle. How they fight, move, react in battle, not how good they look in their various armors while doing it all.

Personally I think the outfits accommodate a wide range of flexibility in movement that standard armor and combat gear would not allow. Do they look good, sure. Do the outfits allow them to be nimble. Yes. Probably not scratchy like other clothing to Kimi either. So fan service? Not so much compared to so much of what is out there. That and we’re talking about their fashion designer being Kimi, who would prefer nothing in the way of clothes, or an ancient entity with a potential distant lineage to Tim Gunn. I choose the later.

thats what i said….. lol

Due respect, but that last frame was definitely fanservice, whether you meant it to be or not. I don’t think there was any other angle where you could have got their rears into that shot, and that armour is not practical in any sense of the word. I get that the armour is mostly for show, since they’re magical warriors of magic, but it *is* very fan-service-y.

And come on, he didn’t insult you at all in his post; in yours you call him a “roly-poly” and claim that his concern is based off of him being hyper-focused on their bodies. Not conducive to a good debate at all.

The script called for the two to be running into battle. Since we have seen enough of their front sides I decided to go with a shot of them running away from the camera. After the sketch was done though I added some perspective to the shot, which makes their rears seem larger and more in focus. Fanservice was a matter of coincidence really. Yuki’s outfit for example, is actually a lot more conservative than it could have been.

And I’m pretty sure roly-poly isn’t as much an insult as it is just friendly teasing.

Yeah, I think that was what I was trying to say. I came off as more aggressive as I meant to, but the point I was trying to make was that “there is fanservice whether it was intended or not,” rather than “THE ROCK IS SHAPED LIKE A PENIS; CLEARLY WHATEVER HIGHER BEING YOU BELIEVE IN *MEANT* FOR THAT TO HAPPEN WHEN HE/SHE INVENTED ROCKS AND WATER AND STUFF.”

I’ll defer to you on that. I don’t know her well enough to say. I just want to point out that the first line of her post makes it a little difficult to tell, one way or another.

I suspect as far as the “armor” is concerned, it’s more or less the same idea for things you’d see in other shows that feature magical heroines and such, the cloth is made out of some super strong ‘unobtainium’ alloy fibers and provides some form of kinetic barrier to protect the user from all but the most devastating of attacks.

Or we could just go with, ‘plot armor’, wherein, the characters are protected from everything that gets tossed their way. At least, up to the point where the script calls for some form of battle damage to happen in order to progress the scene, or elicit an emotional response from the readers.

Such are the ways of good screenplay/story telling.

I’m assuming either they’re going to be relying on speed, or that magic ghost cat-girl powers are going to protect them.

Really hoping it’s not plot-armour; I’ve seen too much of that in WH40K in regards to the Space Marines. Although I suppose it’s likely that Mjolnir is making them more durable, stronger, etc.; I don’t consider things like that plot-armour though because it actually makes sense!

Pretty sure that was worth more than two cents, though. =P

I would love to see Tina bit** slapping the best with those gauntlets.

Looks like someone is about to hit upon the subject of a bad va-cat-ion.

I don’t know what’s worse, the turn their vacation has taken or that pun you just made

I think it was very punny. And if they got GPS they would be able to find tail anywhere. Or hightail it to something more enjoyable?

What a catastrophe? Oh god no, now I’m doing it…

Burn it! Kill it with fire!
Or nuke it from orbit. It’s the only way to be sure.

ALL HAIL THE LASER SHARKS!! *cue dr. evil pinky to corner of mouth here* I always wanted sharks with lasers on their heads.

Always knew that Tina has a very serious psychotic disturbance, that’s why I love this girl.

At the second frame, I’m questioning my sanity.

It’s all about perspective really. Is it cutting your R&R time short to shoulder the burden of saving the world or is it a chance to unwind by beating the ever loving cr*p out of some monsters? Might as well go with the latter really.

“Choose a job you love, and you will never have to work a day in your life”

I really wish they’d amend that saying with a “but don’t be stupid about it,” so that we’d have fewer people starving to death. =(

Figures she’d go for the maul… she always did like shopping.

(polishes it up from the last black Friday?)

Fan service or no, that last panel! Wooo! Nicely done!

I like Tina’s look in panel 2. I think that those monsters might want to find some excuse to leave the island, such as a game of golf in Scotland that starts in 12 hours, that if they swim quickly they will get there in time. 🙂

I don’t know how your going to fit a good ending in to five pages.

but i thought the comic end at 300 pages?

where the heck did you get that idea from?

Yeah what he said, this is way to much of an epic Action/Romance/Awesomely Epic Shit to just end like that.
We keep going as long as Nekonny keeps making.
No sweat though Nek, just take it easy and go at your own pace. And we will follow you till the end. 🙂

A good while back we said it would be 300 pages. We’ve said a few times since then that it we’ll go over, but it’s easy to miss comments on comics. We’ve not officially posted it anywhere that I can think of.

There isn’t any feasible way we could have finished this comic at 300, and compressing it to fit that goal would have made for a crappy end of comic. So… we’ll go over. As much as we need too to finish this story proper.

at least their vacation wont be boring

I suspect as far as the “armor” is concerned, it’s more or less the same idea for things you’d see in other shows that feature magical heroines and such, the cloth is made out of some super strong ‘unobtainium’ alloy fibers and provides some form of kinetic barrier to protect the user from all but the most devastating of attacks.

Or we could just go with, ‘plot armor’, wherein, the characters are protected from everything that gets tossed their way. At least, up to the point where the script calls for some form of battle damage to happen in order to progress the scene, or elicit an emotional response from the readers.

Such are the ways of good screenplay/story telling.

Did no one else notice that Yuki’s hammer has Celtic designs on it? or at least a design that looks Celtic in nature?
Very nice work on those designs by the way

everything is fine and dandy with all girls going into battle and all but 1 minor detail. WHERE IS MAYA AT!!!! cowering with the islanders somewhere or did she decide to “switch sides” again?