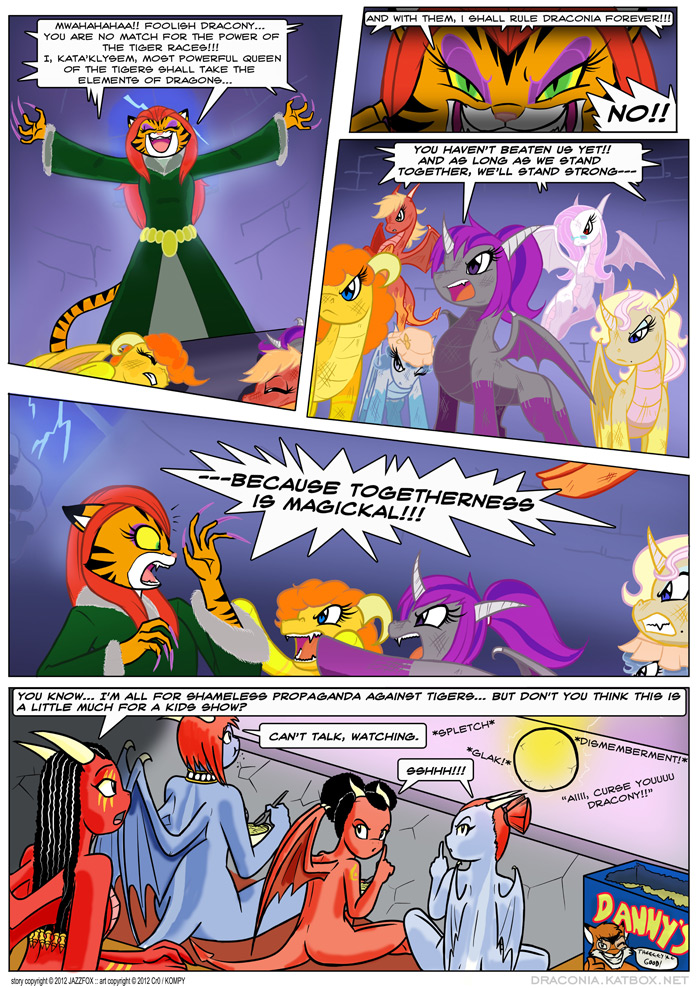 We’re now in the final week of the 2012 Draconia Chronicles Annual.  While I feel that we’ve had some pretty cool submissions this year, I wanted to save the best for last.  Here now is an entry from writer JazzFox, artist Cr0, and colorist Kompy, a team who put together an epic two-parter last year, and found a way to top themselves this year as they give us a peek at the Dragon Kingdom’s latest cartoon craze, My Little Dracony: Togetherness Is Magickal.

Let’s hear from the contributors, shall we?  Let’s start with JazzFox:

I’ve been waiting a while for my turn to say hi, I never imagined that Cr0, Kompy and me would be the ones’ to close up the Annual like this!

This is our second year running with an entry, but this is actually my THIRD contribution to the Annual, as writer to ChaosCroc‘s two pager on his awesome character Quartz, it was no easy feat running back and forth between each group to try and keep within deadlines and try and push for whatever quality we could to break expectations!

Last year it was a reverse situation, where me/Kompy/Cr0 did a very serious two page comic.  This year, we wanted to try a more light hearted story, while ChaosCroc wanted a more serious subject, and Mal agreed to help us out when things looked grim.

Quartz’ material stands for itself.  Croc is responsible for the badassery of that girl, but I do love my trio of lightning dragons: Cracker, Stateek and Tonare. Maybe I’ll use them elsewhere someday?

With the Dracony page here, as soon as I remembered the original MLP had a feline villain? I knew what I wanted to do, since we never really do get to see the show the dragons watch… well… what ELSE would dragon show’s homely messages say?

After spending a good month with both groups, and all the hard work, I’ll say it here: Togetherness is Magickal.

I’ll cut this short before I ramble, so, Croc, Mal, Cr0, Kompy? You all have been epic beyond words in building these entries, and Danny, we all are happy to have helped in anyway we could.

Here’s to another year of Draconia Chronicles!

Next up, artist Cr0:

What up peeps, Cr0 here again! So when I heard Danny could use some assistance again, I couldn’t refuse the offer to once again work with my old partners in crime!

Jazz laid out a devious master plan and wrote the script (the “cartoon” part of it is so cliche it’s just fabulous, I had to do it!), then brought Kompy back to assist me.

And well, it was a blast to work with her-she did my lineart more than justice, especially when it came to distinguishing the “cartoon” and “watchers” parts.

If an opportunity to make another comic and contribute to Draconia Chronicles rises again, I’ll gladly take it!

If you want to see more of Cr0’s work, you can find it at his FurAffinity page.  And finally, colorist Kompy:

I sacrificed sleep for you people!

Seriously, it was an honor and a pleasure to work with Jazz and Cro again on this comic, which you might notice is significantly sillier than our last work.

I had a ball coloring the “cartoon” panels and designing color schemes for the draconies. Fun fact: While most are based off our own characters, not-Pinkie Pie is based off a canon pony. Can you guess which?

By the way, JazzFox was kind enough to provide me with names for the Draconies on this page.  Firestarter and Aqua Splash are my own original Draconies, but here’s JazzFox’s write-up on the others:

–Lustershine: our Twilight, her color scheme/style is based off one of Kompy’s original chars Tanuki, as well as a somewhat reference to Oscura as a leader, figure any Dragon show would have to revere their grand queen after all!

–Diamante: Another of Kompy’s chars, an actual Pony OC called Starlet, who just seemed to fit the role of Rarity, you can see her as the cream colored Dracony with the mole

–Windwhistle: MWAHAHAHHAHAAH, I got a cameo, this is actually a Dracony version of my pony-sona Sweet Jasmine, we were gonna have her leg patterns as stripes to imitate bandages, but then thought no self-respecting dragon would ever be caught in stripes XD

–Honeypie: Originally was going to be Pinkwell, one of Cro’s OCs, but a last minute change we decided on this one, and Kompy was more than happy to have an original pony ref in it =3

Oh, and in case you want even more My Little Dracony hijinks, check out my pal Ethan Qix‘s entry from last week!

And with that, the comic portion of the 2012 Draconia Chronicles Annual draws to a close.  Next week, The Draconia Chronicles returns in all its glory with page 292, marking the start of Chapter Five.  Thanks for letting me take this time off, everyone.  I’m eager to get back to telling the story and bringing you all along for an epic ride.

But wait!  There’s still one more entry to the 2012 Draconia Chronicles Annual, because we still have one last Fan Art Friday to go!  Be back here this Friday for the grand finale to the Annual, featuring an encore performance from an old pal of mine.  ~__^

*hurls popcorn away* Naaaaaah. Discord was a better antagonist than this flimsy tiger. I'm jumping back to my FiM ship.

On another note, THEY HAVE TEE VEE?!

Damn right. But this time the ponies got me. The El soldado de la muerte! I feel so ashamed!

Don't make a big stink about it, guys. You're both overreacting way too much.

…Is that Spanish for the loneliness of the dead?

I would so watch this if someone decided to make this an actual show.

I didn't know that *dismemberment* was a sound affect.

And knowing is half the battle.

Oh, I thought it was like solidarity, but death's soldier makes sense too. Although that "the" in the beginning of the sentence makes no sense whatsoever.

thíhíhíhíhíhí this is just so cute X3

Did you model this tiger after "Katrina" from the My Little Pony special "Escape from Katrina"? If so I bow to your use of nostalgia. Well done! Awesome comic!

ya know, its quite odd, although not 100%, i still get this feeling that the black dracony, looks like the cynder dragon from "spyro the dragon" second season of games. neat. anyways, hope ya had a good vacation time, razor, as you keep bringing us awesomeness :O)

In no way Omnious and creepy…. which is what i would be saying if she didn’t scare the living begeebus out of me.

Omnious: having, being like, or characterized by, everything
ominous: portending evil or harm; forboding; threatening; inauspicious

Although it is probably also omnious. Hmm

I’m actually a little creep-ed out and a tiny bit scared about this. XD

Was she named after the old ship that was found adrift without its crew?

Is it just me or did the story get a whole lot deeper for a moment?

yep it did, now all we gotta do is make sure everyone stays away from the soap bar of doom to get the full story on how deep this thing is and yes i am still digging and i haven’t hit bottom yet…

A wild Plot has just appeared!

In case you don’t know the lower set of navigation buttons doesn’t entirely work… you can only go forward with them, and not backward.

I know. Soon, the entire site will be rebuilt, and then it won’t be an issue anymore.

Really? I can go forward and back with them just fine.

Celeste reminds me a bit of ‘The Doctor’ ,an Emergency Medical Hologram in the TV series ‘Star Trek:Voyager’.