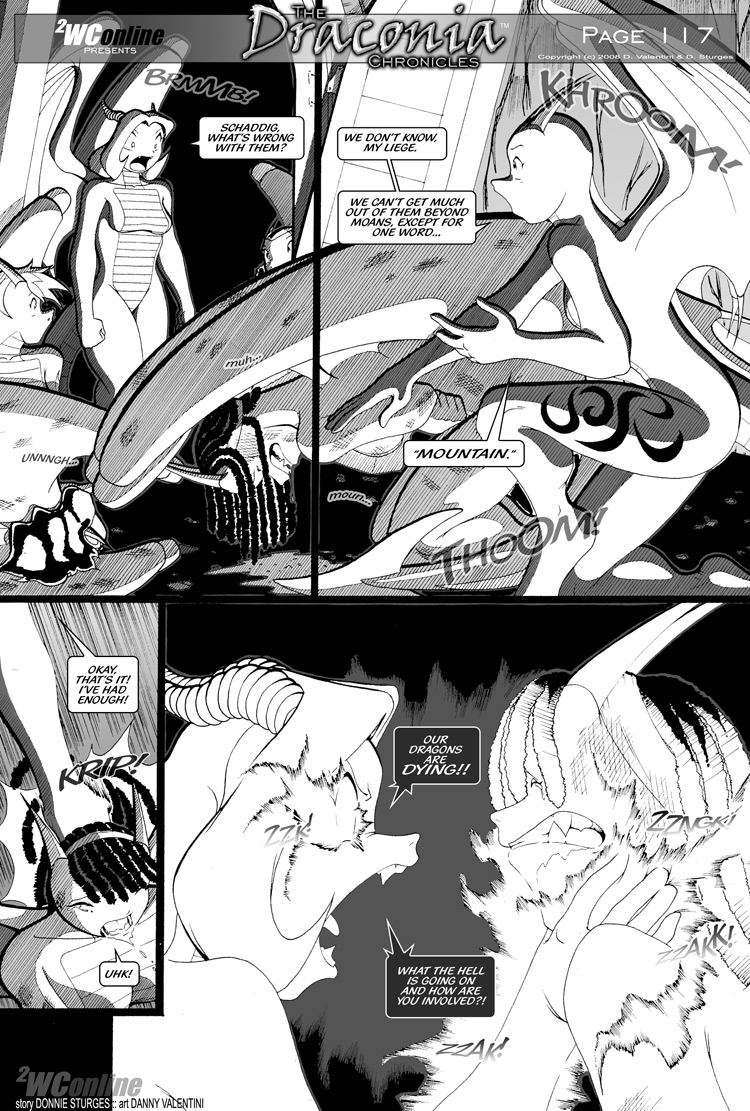 Are you saying your father is sketchy?

I hope we get to see some of these new races. They seem cool.

I’m pretty dang certain those races wouldn’t have been mentioned unless they become part of the story-line.

Actually, I think we already seen two of them. The fera are probably… every single character in this part of the comic, while Milo seems to be a Dahaki. Though… that kinda makes me wonder about the guy who adopted Milo, since he doesn’t seem to fit any of the three described races…

Maybe he’s an inhabitant from the kingdom that was wiped out? I’d be curious to find out for sure though 😛 Then again, we don’t know if Milo’s mark is even IN Evyr. Unless I missed something at least.

Milo is a Dahaki, the events of Milo’s Mark take places a few hundred years before UberQuest.

So I was right to wonder about humans being present on Evyr. Seems humans occupied the ‘fifth kingdom’.

That’s interesting. Humans normally don’t keep just to one region. we tend to spread out despite (and some times because) any of the other races desires.

I gave up reading Milo’s mark back when Milo ‘turned off’ the lizard trying to be an alarm clock. The updates were too slow.

Guess I’ll have to check up on it again.

I do wonder though… Milo’s ‘father’ seems to be a human. That doesn’t fit this history lesson. Humans aren’t present in Sesame’s world.

Very interesting still I would love to learn more about the history and the disaster of the 5th kingdom.
P.s Dragons!<3

I suspect Claire had something to do with that disaster. She wasn’t transported to the past. She was transported to the future… to centuries after her transportation created disasters in her time and the star systems around her station.
(all tongue-in-cheek story on my part)

Phillip Fry slept is his own great grandfather

Honestly, I am glad you didn’t go the “traditional route” (Tolkein style) with humans, elves, dwarves and “animal” type (like Khajiit) Very interesting races
Honestly, this is quite the motherload to dump on us in one page. Maybe remind us every now and then when they venture off into a new place?

I agree. One thing I like is that the dragon-like are the ones that are tech savy. In other comics I read, dragonkin are usually brutes or rely on magic. It is nice to see a change of pace.

Yeah, Claire will want to visit them and that’s when the others will have to convince her it’s just not done.

While I do like the way Tolkein did races a lot, it’s nice to see something new brought to the mix. With high fantasy writers, I say to each their own in terms of how they do world building and story. Speaking of which, I’ve recently been reading book 2 of A Song of Ice and Fire and am growing quite fond of the lore and history of the world New Jersey Native George R.R. Martin has crafted. He truly is the Tolkein of this generation. May add that I think the way Skidd and Phuufy are doing their world building and storytelling to seems reminiscent of Mr. Martin, and that I mean to say this as praise and approval to their work.

LORE! <3 Absolutely been waiting for this page ^-^ I love learning the lore of worlds like this!

Trust me I said the same thing xD

I’m assuming we’re learning through Claire’s eyes, from the Emporium of Knowledge!

So Fera consist of many types of mammals?

Fera can be a number of various land mammals.. so yes.

Edit: Also gonna go ahead and assume there are no fish people in this case. x3

No fish people! Fishes are for eating. :3

they make good bait too

bet the 5th kingdom is gonna be like the hunger game books they are alive but are hiding.

Dahaki have the longest life spans but reproduce very slowly/rarely. Avions are larger, produce the fastest and have the shortest life-span. Fera are the nice-middle-ground between these two.. thus have populated the world of Evyr more than the other two. Also they seem to have the best adaption to their world with their special abilities and what not. 🙂

Interesting. Would be nice to see them as the story progresses. I feel that Milo might be a Dahaki or descendant of that species. May or may not be canon, but its fun to think of it :3

3. So since Claire doesn’t know about the history or even doesn’t know what the map looked like, did she come from the future/past? or from another dimention? She sounds like a Dahaki in a Ferra’s body.
2. meanie! you blacked out the characters so I can’t see the other two races.

1. Are Dahaki butt holes? “Inteligence” can lead to egotism if applied to a whole race… I hope it’s not the case and they can fly cause I love dragons… I wanna be a flying Dahaki!!!!!!!!!! Woosh Woosh

Actually, egoism (especially with an entire species) is considering yourself better than others.

You don’t actually have to BE better. You just have to consider yourself better and nobody would be able to convince you otherwise.

I’d say ALL THREE of these races will have that particular malady. They’d just display it differently from each other.

Egoism is commonly linked to Intelligence in the sense that it applies to, for argument sake, monkeys and humans.

Because all animals (but monkeys in this case to be relatable) other than humans as a whole have less intelligence than the human race, we tend to feel superior. We have, as the comic stated it, Superior Intellect. Monkeys look like us, have generally speaking, a better body type than us having strong tails and two sets of hands, They are poached by many because they are “nothing but dumb primeapes.

So there are three races but four kingdoms is one of the kingdoms shared by all three or something?

Alder and Sarawyn are owned by Fera – Hazerath is a disputed land between Fera and Avion and Taequis is a Dahaki kingdom. Dahaki and Fera live throughout all of Evyr but Avion are more limited in their population due to their unique biology adapted to a specific environment mostly only found in Hazerath. They can go elsewhere, but need specific help to live on lower altitudes. It doesn’t help Avion are very dedicated to their homeland and are in a sort of war for it at the moment.

Dont you guys realized that the planet REALLY look like the future Earth? Think about it; The north part of the planet look like Russia, while the southwest look like Afirca, the east is China, etc.? It may not look like it, but if you think about the fault line, namely earthquake and volcano, that kept the plate shifting?

That wasn’t our intention, the ‘fault line’ is more or less the border between kingdoms.

Im not talking about kingdoms. Im talking about the planet in the top part of the page. It could be looks like the Earth in the future. “Our” Earth!

Is the guy on the left from swashbuckled

No.. The only “cameo” from anyone Katbox related was Mihari.

only music I could think of while reading the whole page was this: https://www.youtube.com/watch?v=wzTletpyuEE

Dammit,that reminds me to finish watching season 3 and season 4! Trust me, it was very tempting to give the various kingdoms their own ‘mottos’ too. =P Certainly one of the inspirations for the crests.

Might I just point out how awesome it is seeing Riiser’s name in the sponsors list?
But yeah, cool to see all this genuinely interesting world-building so soon, it really helps! :3

…and here come the chipmunk cheeks!

Soo, what’s in those that makes them so good? (I’d like to replicate it if possible)

They’re croissants, I think. They’re good all by themselves (I’d know, I’ve had croissants before)

Well ofc they’re croissants, but on this page http://paprika.katboxad.net/comic/047-exceptions/ you can see there’s a FILLING. (didn’t think I had to specify filling)
So asking again – what FILLING is in those CROISSANTS that makes them so good?

On that day they were reminded…

Gerbil Yuki will devour you all!

Um, those aren’t sandwiches. Im pretty sure those are croissants…

thats what I told Nekonny in a chat on a stream