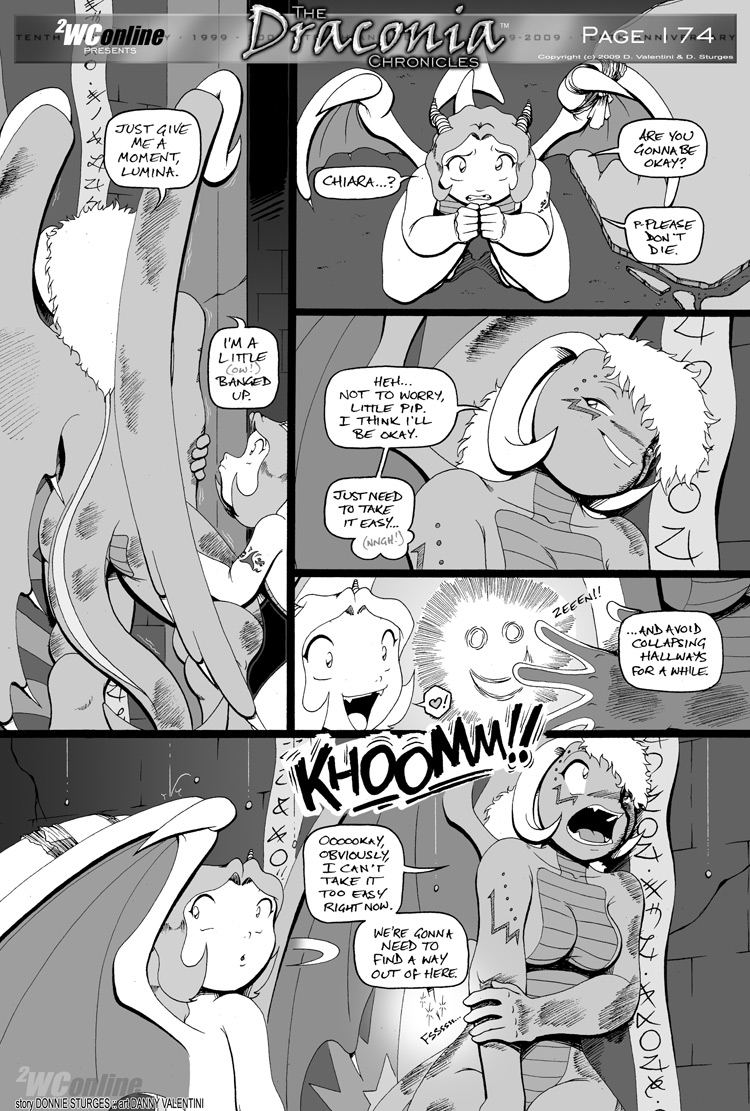 Words mean nothing ? Oh, you couldn’t be more wrong. Wars have been waged upon simple words. And words can hurt much more, for a much longer time than a mere punch or kick.

Real love is unbreakable ? There’s no such thing as unbreakable love. Otherwise, people wouldn’t split up with lovers.

I agree with that assessment. His misjudging the situation aside, how could anyone love him in the first place. It makes no sense.

Nonsense. Words indicate the status of the love, and even if real love is unbreakable, that doesn’t mean it’s unconditional, it simply doesn’t break because the other entity doesn’t fail to satisfy the condition. It’s like the words “if the moon is made of cheese, I am santa claus”. That is a true statement. I can confidently say I am not santa claus and I am confident that the moon is not made of cheese. You don’t get to come along and say that it’s not a true statement because I’m not santa claus.

Very nice page. always nice to see when a story doesn’t just go “this new person knows everything” like ive seen in the past. Now how will Mason respond?

PS: Last panel really kills in regards of showing how adorable Kibbles can be.

who in the right mind smiles while telling someone else that they had accidentally killed a man?

Well if we were going for ‘creepy sociopath Kibbles’ we may have went that route, but she is truly remorseful.

if you did go that route, you might as well have made her smile like this guy: http://theshovingbuddies.files.wordpress.com/2013/06/nic-cage-face-off.jpg

what I meant was, if you can temporarily put the plot aside and simply look at her, she would definitely look cuter if she smiled

unfortunately, that was not right for her personality or the plot. Maybe later we will get to see that. You are right though. Kibbles is very cute with her hair down and relaxxed.

I have to wonder about that locket she is hiding. It obviously has a lot to do with why she left home. Judging from her statement, I’d say she was being forced into something she did not want (and likely, neither did the family she left behind). I suspect an arranged marriage.

or something more along the lines of a backstory similar to that of Samwell Tarly.

so far over my head, I didn’t hear the wings flap.

I think she just wants to help her family. But who knows, you could be right.

What are the odds of Kibbles being the missing person of nobility Kylar was sent to find?

Outside chance of Farron (god, I hope not) or Dante (no, just hell no).

Claire? only if somehow, she returns to her own world and it was in the past. then, the search would actually be for the creator of ‘the ageless one’ who will just happen to call Claire “sir”

if kibbles is the missing person, then what is the blue stone she hiding behind her

a token of her heritage?

Prepare the docks, shipping is going to be strong in this one.
Alright so, we all knew that Mason was gonna talk to her.

And he looks very serious and sincere to listen, alright…

Also did anyone how cute Kibbles looked on the 3rd and last panel?
Like seriously, someone may die of cuteness.

Overall, I feel a backstory from Kibbles coming in, or maybe a small advice from Mason, meh, even both.

Or an old song by the group Queen.

Just what we needed a backstory to calm our tits

A little conversation to tone things down.

Not sure if anyone can call that a terrible death.

Accidental death by healer. To a healer like Kibbles this is always terrible, even if he was ash before he could feel it.

It’s not like they didn’t bring it on themselves. The way the were accosting her, maybe her sub-conscious considered it an attack.
there she was, surrounded by multiple attackers and alone… a powerful aura of flame would have been the PERFECT response.

last panel makes me wanna get all up in her face and rub her ears and go “whose a good murderer, you are, yes you are!”. Joking aside I don’t actually consider her a murderer given the circumstances.

low grade? dude, I just want to see your idea of superior cuteness.

On second thought, maybe not. But what a way to die…!!!

I think she has this all wrong, she didn’t burn him to death, it was her logic defying cuteness that turned him to ash, at that range no one could survive tha- *sniff sniff* hey, does anyone else smell something burning?

Oh, dear. I think things might get complicated really fast. I compered that Kibbles’s necklace with the symbols on http://uberquest.katboxad.net/comic/40-history-lesson/ and it seems to resemble the symbol for Sarawyn.

I like this.
Kibbles may be the ‘peacemaker’ of the group, but she has her burdens, too (doesn’t everyone?).
Nice to see Mason’s helpful side again. I suspect there is a lot to him we haven’t seen(most of it nice).

More evidence for a MasonxKibbles ship.

you know, it’s gonna be hard to NOT ship him with every one of them.

Unless/until he picks one…

you know, it looks like he’ll be the one to grow on them. If and when he ever chooses one, the others would see it as just natural and foreordained.

yeah right, like Claire or Sesame would just accept it, let me know when that happens cause ill be dead of shock

I wonder if Mason’s backstory will be worse than all of these… in any case, he is certainly the one to listen. Hopefully Ses’ doesn’t become to jealous of all this, because you could certainly see that with the interaction with Claire.

Heh, like most stories… it’s the waiting for the next episode, that the hardest part… excellent stuff.

We have no less than 3 here who could be the ‘lost nobility’ our missing archer must find… Sesame, Kibbles, and Mason.

I can see any of them easily. Farron? I hope to hell not. Dante? HELL NO!!! Claire? now, that would be truly weird, but I did come up with a way it could happen (“greetings, Sir”)

You know, something about Kibbles’ “trial” just doesn’t make sense. (a lot, really).

1> there is that ‘secret society’ that seems to be looking out for her, as shown in the tavern with the law officer
2> she is ‘arrested’ but not confined? since when are criminals (especially those suspected of murder) allowed to roam freely?
3> her trial will not be on location or in the city the offense occurred? interesting that she will have to travel to the trial instead of waiting for the judge to come to the city.
4> the authorities just expect her to appear at the trial in which she may be found guilty of murder and be sentenced to death? No magical compulsion or ‘escorting officer’? They expect her to bring the rope she’ll ‘hang until dead’ also?

For 2 and 4, It is most likely that in the case someone doesn’t make their trial, there will be a general notice among the guards to capture on sight, which makes it impossible to enter villages, townships, and cities. This would also lead to bounty hunters on the tail of the the convict, (using that loosely,) making life a bit harder to live with.
As to point three, most villages don’t have judges, judgement is usually passed by a captain of the guard. If a certain case was deemed ‘beyond their abilities’, (by the lazy or the inexperienced,) then the prisoners would be transported to the capitol, in the high courts.
And actually, after thinking about it, point one could be answered as well… By helping Kibbles, Sesame would be in their ‘debt’, making negotiations easier for their case…

Oh gosh darnit Kibbles. Why must you be so darn adorable, even in a situation like this?

“It is as serious, and don’t call me Shirley.”

Okay, this got all spacey and trippy real quick like. Seriously, did Yuki just break the space time continuum or did Tina do something again. XD

Yeah I know I was just getting a rwby reference in

Wait a minute…a random thought just occurred to me. Ruby is a mecha person right? What happens if Tina and Yuki managed to bust out of Yuki’s realm and are now in Ruby’s realm? If I’m a betting man, I suspect that this is going to be a Gundam scene next.

Space. Spaaaace! I’m in space. You’re in space! We are all in space. SPAAAAAAAAAAACE!!!