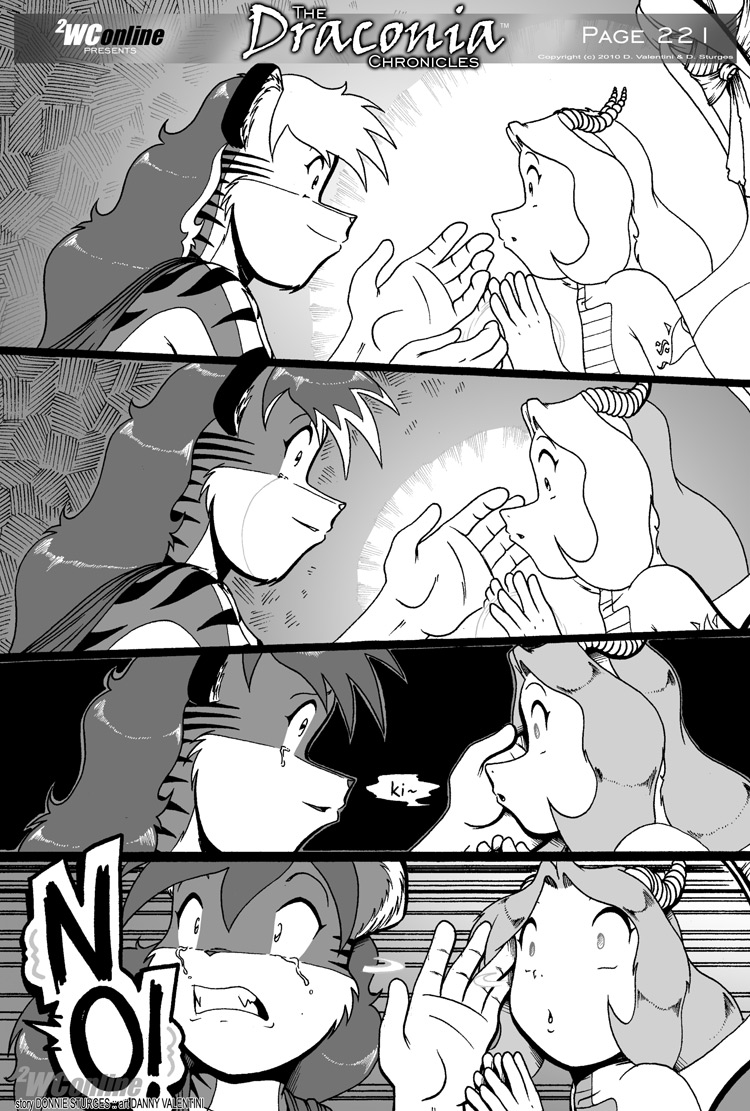 Ooooooo, now we see why he’s regarded so highly.

I knew he must have been ‘special’ in some manner. He just proved that not only can he take control of a bad situation, but he has a ‘extra boost’ like Sesame does.

First, his ‘extra’ is apparently agility and speed, while Sesame’s is strength.
Second he has MUCH more conscious control of his ‘extra’.

Something tells me Kylar is NOT someone to mess with in battle.

“Second he has MUCH more conscious control of his ‘extra’.”

Hah, knew someone was gonna make this joke.

Kylar probably practiced using it, Sesame of course was never encouraged to because her’s was dangerous to others and she would’ve been tempted to misuse it while she was younger.(and her father died before her training could start…)

Well that eyeshot will sting in the morning!

HE LIVES TO SNARK ANOTHER DAY PEOPLE! 😀

If that didn’t cure Franciss perma-bitchface, I don’t know what will.

This is a very exciting page. Great work, guys! Kylar is just awesome!

I don’t want to e that guy but technically there’s only one arrow to be knocked, crossbows fire bolts, not arrows. ¯_(ツ)_/¯

And I don’t want to be that guy, but technically you “nock” an arrow, not “knock” it.

Yes I know. Though I thought that’d be too much text to add, “JESTON, AINSLEY, NOCK YOUR ARROW, LOAD YOUR BOLT. AIM” It’s a high tense situation too.. I’m sure Ainsley knows what he means.

I think any version is fine, but while it’s being discussed, heres one other option:
“TAKE AIM” is pretty short too =)

Showing off some skillz

Get it together Francis, new kid makin ya look bad

He sure is a nimble fellow ain’t he?

Yes good idea. Shot more arrows at the giant savage beast. Im sure that wont piss it off any more then it already is. Let the arrows fly!

I don’t know why, but for some reason the fight music from Star trek keeps popping up in my head with this one….and it makes absolutely no sense because that music doesn’t fit in here at all.

is it weird if im hearing Beethoven’s fifth symphony instead????

yeah, but it’d be even weirder if it was American Pie by Don Mclean

that is diffidently weirder

Kylar is secretly The Flash

But if Kylar is the Flash, then.. Who’s Barry Allen? (insert generic Iluminati meme here)

that thing must be pretty tough to resist a head shot like that.

That was a rather abrupt scene change. Thought I missed something.

Which leaves us with B, he was keeping it a secret for some reason. Could it be that Fera with such powers are looked down upon? That may also explain the reaction Eiran had when he learned Sesame had such an ability, at the time I had assumed it was because he had feared it might corrupt her or she might not be able to ever control it, but what if it was because of how he knew she would be treated if the word got out?

If this is true then that makes two big secrets Kylar has been keeping, I wonder which one is considered to be more frowned upon Evyr, his sexual preference or the special power. To think he has accomplished so much, without ever needing to use that kind of ability, he should be very proud (assuming I am not spouting nonsense of course).

If it is nonsense, it is very well considered nonsense.

he’s a rookie cut him some slack

if all else fails, go for the eyes

If a recruit is training to use a bow that is especially difficult to shoot, is he in the school of hard nocks?
…
I’ll show myself out now.

It just goes to show: Rule one: Cardio.

It still surprises me how often that list comes in handy.

anyone else notice that the site has a new background?

We’re in the process of updating. The previous background was a bit too busy and clashed with the header. We’re waiting on our webmistress Mihari to finish upgrading things before changing the header-banner. We’ve also updated the Cast-page! More characters to come there aswell.

If I didn’t know any better I would say they are planning to make a physical book soon….

What gave you THAT idea? *shrugs* :B

Alright, back to our intrepid explorers, is Wuuh part cheetah? I’d run as fast as I can too with a beast like that after me. By the way the facial expressions on the characters are absolutely terrific. They certainly convey the story almost without words.

Sorry, meant to say Frances not Wuuh, forgot his name.