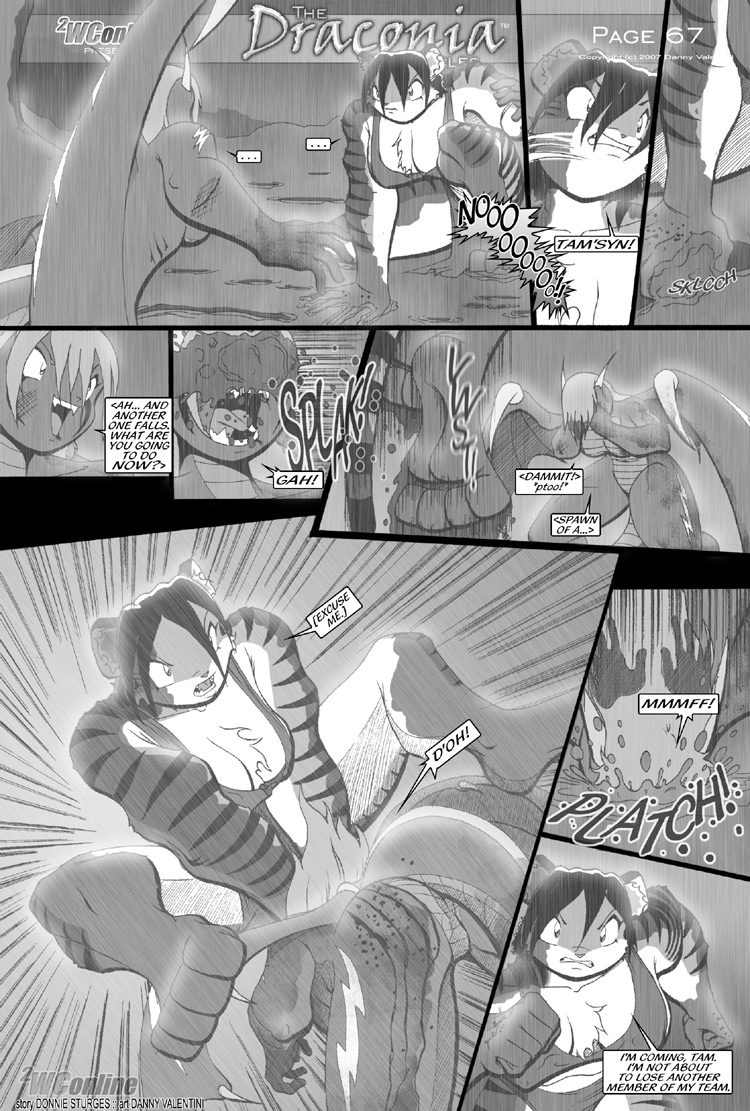 “Here’s mud in your eye Elektra!” (uses mud shot, but has no effect.)
“Oh yeah, a dragon and electric type.”

(uses thunderpunch but I block it and deliver a series of jabs and kicks to her body, unfortunately she counters with her tail and sends me sliding across the mud.)

You are going to have everyone after if you keep the jokes up man.

aw man, I liked that little robot *waves goodbye*see you in the funny papers

Huh… The main character’s kind of a jerk.

Hehe! I think I would be too, if I were mistaken for the opposite
gender, told that I wasn’t needed on a team after having my hopes built
up, fought a giant slime, had the kill stolen from me, had a broadsword
stolen from me, and then had a large metal door smashed into my face.

‘Hmph I’m having such a bad day I’m just going to destroy this stranger’s only way back home and her best friend!’
Yeah… Still kinda rings of sociopath.

Sesame was unconscious in the previous page and Claire hasn’t exactly introduced herself over a cup of tea either. Just give the comic sometime, there is a point to all of this.

I’m sure, and I’m glad claire’s here- but the way they did it, sesame seems like a jerk.
…Although dog girl just killed like three people a few pages ago and no one blinked, so maybe I’m in the wrong place.

Hey, dog-girl…. I mean Kibbles… is a peace-maker. Her social skills (and problematic healing skills) are needed at the time.

the only jerk there is Claire

So if you’re having a bad day I can expect you to crash my car and risk killing my best friend. Either you folks haven’t thought this through or I’m surrounded by psychos.

LOL, your post reminded me of an old variety show called “Hee Haw” One recurring strip started “Gloom, Despair, and Agony on me…. ooohhh. Deep Dark depression, excessive misery…. ooohhh. If it weren’t for bad luck, I’d have no luck at all.”

Claire is the fox who fell from the sky

My vagueness was misinterpreted. The cat was who I was referring to.

thanks for the clarification.

Claire just pissed off the only people who can help her

You clearly have never played an MMORPG. 😛

Heh, it looks like a few folks need to work on their people skills! =^^=

I have to agree there. Sesame’s reaction is understandable, considering the cause. I got a kick out of it (not as much as Proto did, tho)

Clair did NOT handle it right at all.
First; she called Sesame a lady, and judging from Sesame’s earlier reactions concerning being a female warrior, “lady” could be an insult.
Second; Clair took on a condescending attitude, which is virtually guaranteed to anger anyone so addressed.
Third; Clair said her own problems were more important than Sesame’s problems (not a good idea in ANY social situation)
Last; She called Sesame’s problems stupid. No explanation needed for this mistake.

So now we have two clarifications of entries in the cast profiles:
Clair really does have little social grace (damn little)
Sesame really IS much stronger than she looks.

Looks like Proto may have its own little adventures for a while.
Sesame and Clair will need some of Kibbles’ peacemaking skills.

Don’t worry about Proto. It’s hovering inside a large metal egg that will be crashing violently somewhere. Lots of ‘air cushion’ all around it.

Unless it meets with this planet’s version of a rust monster, Proto should be fine.

as soon as I read Flux Capacitor, I started to hear the Back to the Future theme in my head.

maybe Claire has the Nike shoes from the movie??

“This… Is… SPARTA!
*Thwunk!*
B-But Proto!”
Really understood her reaction ^^

all I have to say about what Sesame did in the second to last panel is this:…….well…that was dark.

Well, this completes the size comparisons.

Page #12 showed (despite Dante being bent over) that dante and Kibbles seem about the same size.
Last page showed Clair is a bit larger than Kibbles, slightly.
But this page shows Sesame is definitely smaller than any of the other 3.

Well it is quite obvious the main character is a hot headed, skilled-less, moron. Without the genius and the sorceress by her side, she will die early.

Maiden: aaanndd theres the kick off a-what this isn’t football then why the hell am i here for?

Lol but seriously that kick damn i wouldn’t want her to be mad at me. I hope proto will be alright

and its good!!!.. wait where the field goal uprights…

Any here expect Proto to fix the transporter before Clair finds it, again?

After all, look at the wonderful job it did with that cardboard box.

That little ‘blink’ in the last panel… was it just sunlight glinting off the transporter….

OR WAS THE TRANSPORTER ACTIVATED AGAIN?