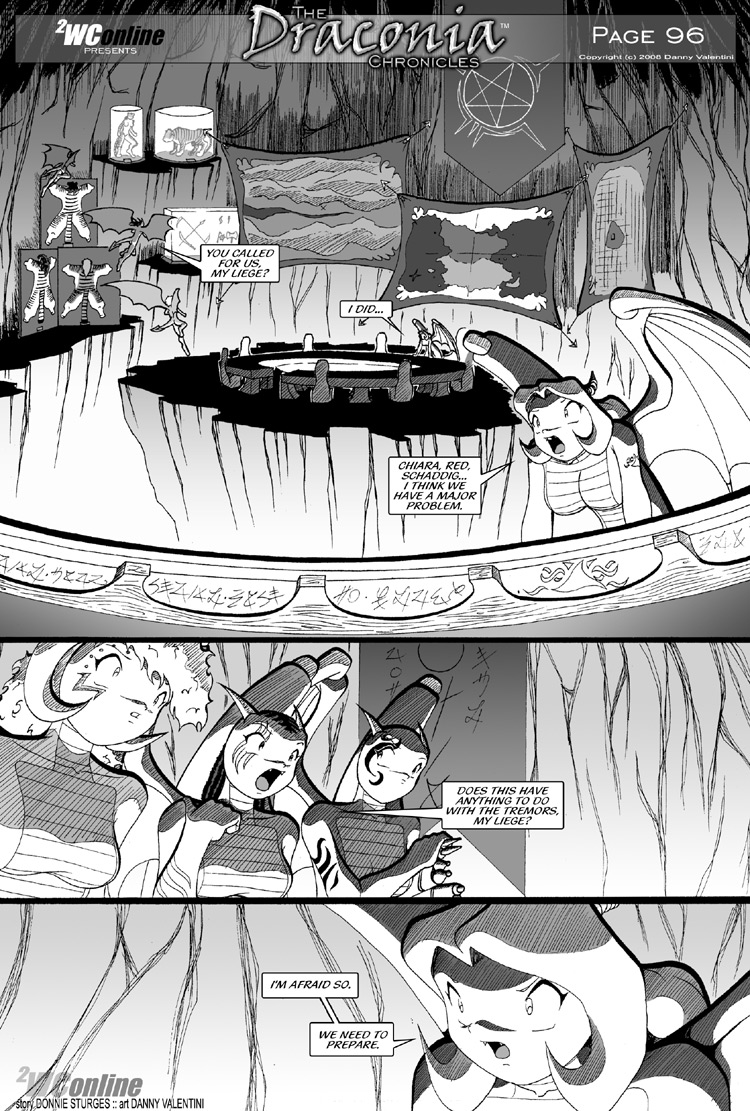 “*This room screams Dr. Strangelove, and there’s that unsettling banner again-hm? Prepare for what?*”

“*This room screams Dr. Strangelove, and there’s that unsettling banner again-hm? Prepare for what?*”

I just noticed the tigers in vats…

I just noticed the tigers in vats…

Is the comic black and white for a reason? My eyes feel weird

Is that an ACTUAL tiger in the background?
An actual four-legged, non-humanoid tiger?

It may be a friendly gesture on his part, but I think our friend Sesame may be carnivorous

OK! A bit of a world-building tidbit I still need to add elsewhere.. not really spoilers k?

All Fera (that is the name of the race of anthromorphic land mammals that everyone in the cast makes up) are omnivorous unless by choice, they could be vegan/vegetarian.

Now onto the Sesame being a cat and Farron being a rat..

There isn’t much more to their outward appearance other then genes, they can all interbreed and such. Hybrids are common, but after 2 generations, the dominant gene takes over. Say a dog and a rabbit Fera have children, their children and grandchildren will be hybrids (mix of dog/rabbit) or take after one parent. Their great-grandchildren however will tend to look like whatever gene is dominant, so one will look just like a dog or a rabbit.

However some ‘races’ prefer to stick with their own group and exclusively have dog people or rabbit people.Some traits are more desired then others,being a ‘Rat’ is not desirable ‘race’ in Evyr society as are other animals typically disliked in human society.. such as vermin animals. So there is an aspect of racism in Evyr’s society.

as the late Jon Arryn said with his dying words, “the seed is strong.”

Wow… so wait… in order to make a new race, you’d have to, like in real life animals, take a large group of Fera whom looks like you want, mate them together and continue until that becomes the dominant race?

Yeah pretty much, although I guess some old dormant genes still might randomly pop up. But they could certainly try to ‘breed’ out other races.

Miniature Pinschers were bred to fight rodents (rats) during the plague. They succeeded to make the dogs by breeding italian greyhounds, german pinschers and Dachshunds together. After that, to keep the breed as a breed, they bread the desired pups together and a new breed was born. Granted, they needed 5-7 family lines of the breed to be strong in order to do this which meant a lot of dogs, but that’s besides my point.

If, lets say, Farron and Claire had a night of drinking and slept together (sorry DarkFox) And their babies were hybrids. The hybrid children thought they looked cool and wanted that for their babies, so they sought out and miraculously found a bunch of fox Feras and Rat Feras to get them a cesspool of hybrids, could they then breed the hybrids to make them a new ‘race’ of Feras in which Rox Feras are now a thing?

Yes, you could technically just have a bunch of hybrids to make a new ‘race’ I suppose.Though after the 2nd generation certain dominant genes may take over, so you’d get more Rat-looking offpsring or more Fox-looking offspring – but if you keep breeding hybrids that may be subdued. I haven’t thought insanely deeply on how genetics and stuff works in this world, so I am sure there are some serious loop-holes in my explanation here.XD

maybe some loop-holes, but one very strong foundation. When even geneticists can’t explain it, why should you?

Sorry for making you think so hard. I would love to see some hybrids of choice myself.

Speaking of which, WHO IS IN YOUR DISPLAY PIC?!? sorry but it’s been bugging me all this time

My display pic? It’s my character Ceph of course! She started off as a racoon- but now she is kind of a whatever-hybrid furry thing. =p
She and Skidd’s character.. uh Skidd XD may be making cameos in UberQuest from time to time!

Can I see a decent size pic of her? or Him?

Now THIS is a sweet solution for the missing crossbreeds problem. I love it. 😀

My personal workaround this problem is a bit more convoluted, but awesome worldbuilding stuff like this makes me hope that I’ll get a chance to use it one day. 🙂

Well I am interested to hear your input, it may actually help with my explanation.I’m trying to think of this more in the terms of how people of mixed race genetics work rather then species-splicing.

I don’t think so. He wants his money in his pocket. Drugs and poisons cost money that he can sell it for. So, leaving them alone and not saving them would, in fact, save him money. So it’s a safe bet that the only thing she can catch from those fruit is an allergic reaction.

Plus he is eating an apple from the same bowl, I think it’d be silly to poison himself?
Farron is just demonstrating he isn’t all bad, despite the front he puts out. 🙂
They did something nice for him, he is doing something in return. He tends to only help others that prove worthy of his time.

Her blush and tail betray her scowl in frame 5

That blush and the ‘tip-wag’ show excitement.

Cats of all sizes get that tip-wag when they’re excited about something and the blush is just an artist’s stroke to show the same thing.

What got her excited? She and her little group were just called ‘green’ by somebody who she last saw HIDING from an encounter. That’s not sitting well with her, despite the information he saved her life and her friends’ lives.

She is annoyed that she is being called out on her inexperience and a bit embarrassed because she can’t deny it. Sesame tries to seem more ‘mature’ then she really is, she wants to be taken seriously but being a short cat girl she often gets made fun of (See Page 2).

She’s going on an important quest for her village in dire situation she is trying to fix, she had a tough day and was saved twice by two different when ‘she’ wants to be the hero.

The tail flick was meant to mimic how cats twitch their tail when peeved.

I thought I said that in different terms. Good to see you agree.

also sesame was pissed at the fact that she was treated different cause she is a girl in Evyr.

Actually, I think Farron isn’t treating her any different due to her gender. Remember, he was perfectly willing to let her fight until she failed. I can see him doing the same if they had been all males.
Truthfully, I doubt very much he would have to their rescue if they had been all males, but he may have.
And he did earn the loot he got from killing the dopple-wrym (though I would have liked seeing that fight).

Aww she blushed while trying to look tough

I’m trying to imagine Farron’s voice. Is it cool and all suave sounding? Or is it all squeaky and rat sounding?

Could really change the tone of the comic.

This is my particular head-canon, he sounds like Chace Crawford. So cool and suave and gravely?

Very interesting. Thank you for that thought deeper into your character!

They dress very similar too…

Well Farron is my favorite for for sure now.

surprised nobody made a remark about Claire’s “IT LIVES!” statement, heh.
Then again I act somewhat the same way as her, reminds me a great deal of my own personality. o3o

Has anyone seen fangs for Sesame, Kibbles, or Claire? I see ‘human’ teeth. Despite all appearances, I suspects we have omnivores, here.

Ahhh… I see my statement is verified below. ***shrug***

I think Farron is in some ways like Ser Sandor Clegane from Game of Thrones…minus the lust for killing and grumpiness of course.

I regard him to be more like… A nice version of Viserys? He’s no dragon. He’s a rat. Cowardly but bold, and he gets what he wants. Also, white hair. ouo

Regarding the magic lock. A professional would simply disenchant it then make off with the goods.

It would be easier to just rip the bag open

The item is one of a kind, the material is very resistant and cannot just be ripped by normal means. It’s magic in itself, holding more then it appears (think of a magic void/pocket) and well- there is a pretty cool twist with it but I don’t want to ruin things.It can’t be simply disenchanted as it isn’t like most enchanted items.

IT LIVES!!! I love Claire and farron he seems like a nice guy!

Farron doesn’t want to be known as a nice guy, but it shows he does care. Judging from his profile, he has good reason to maintain the rough exterior.

Hmm… DID he cheat her out of her money? We don’t know how long it has been since she was dropped by the dopple-wrym, but she seems a bit better off than she was before that encounter.

Yeah, I don’t believe that either.

I wonder if the wise and powerful savior will entrust combat knowledge onto Sesame?

Okay I’m starting to dislike this guy less and less. Come one keep it up. 😀

will we find out about sesame’s past? Will Farron join the gang? Will proto be okay? Will Kibbles finally be able to cast healing spells? Find out on the next panel of UBERQUEST!!!

WoW, you are really getting good at depicting the expressions on the characters. Facials, ear positions, body language, all very well done.

I especially like how you showed how pleased Farron is with himself.