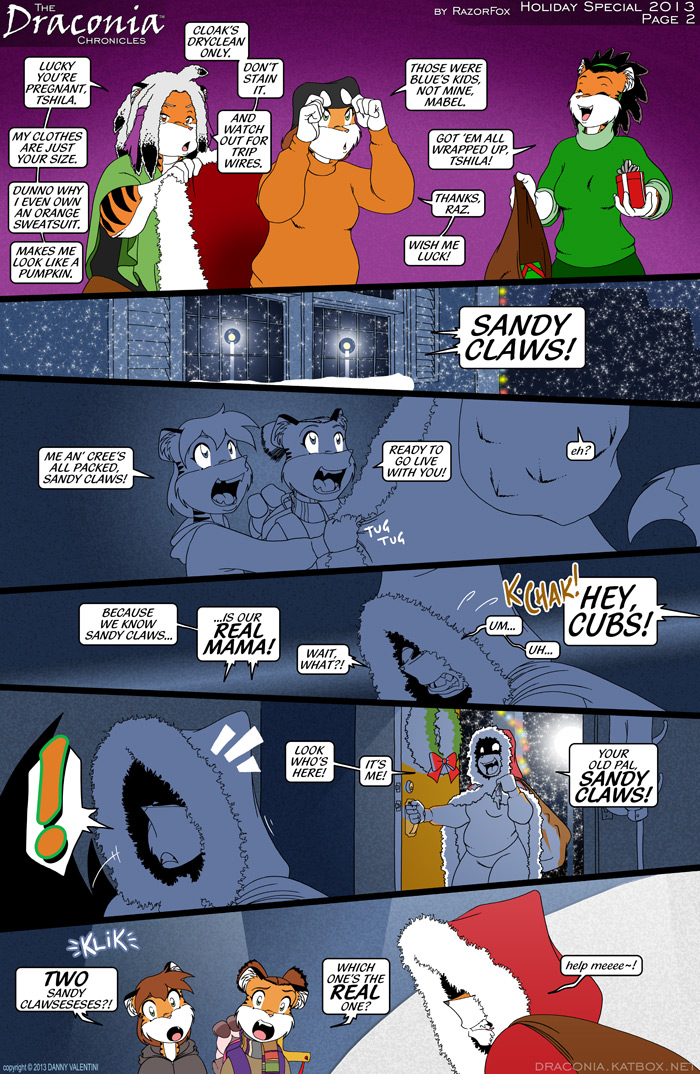 As Tyree so eloquently put it, “TWO Sandy Clawseseses?!”  Will the real Sandy Claws be revealed?  Stay tuned for the grand finale!

It’s that time of year again!  You can now order the 2014 Draconia Chronicles Calendar, this year carrying the theme of “If They Were Human.”  You’ll get twelve months of the series’ biggest characters done up as humans from all walks of life, and you can get it for just $17.00 plus $5.00 for worldwide shipping and handling.  Place your order now!

Back to work on the next page and the calendar.  The thrilling conclusion to this year’s holiday special will be up no later than Christmas Eve, but it’s still best to follow me on Twitter or Like the Draconia Chronicles Facebook page to know exactly when updates go up.  Take care, my fellow Draconiacs, and thanks for reading!

And so it beings again. MHAHAHAHA!

Reminds me of Clay Fighters for SNES

I am wriggling in anticipation.

Depends on whether the real Sandy Claws was expecting this.

is that… a doctor scarf?

Yay! Someone spotted it! ^o^

Sorry! It’s all just some holiday fun, a long-standing “Draconia Chronicles” tradition. One more page and then it’s back to the story. Promise. ^__^

well then can we get hot filler?

You’ll get hot story soon enough. Hang in there.

“Dragoness Jesus helps those who help themselves!”

Great! Now I’ve got a Draconia-themed nativity scene in my head. ^__^;

Oscura and Ghislain as Mary and Joseph, respectively, though I’m sure neither would settle for a manger. Think a posh, high-end resort hospital, instead.

So instead of Three Wisemen it’s a Tiger Hospital Staff of Obstetrician, Gynecologist, and Pediatric Doctor?

Yes, bearing their gifts of gold, morphine, and an epidural.

Sounds legit to me.

hearing you say that makes me want to say two things; one, you ever wonder why we’re here; and two, there are multiple Dungeons & Dragons stories that always have some group of gods like in The Legend of Drizzt, Gotrek and Felix, or in the Elder Scrolls series, each of which are totally original.

well, how’re they going to explain themselves out of this one?

Well, there can be only one, so one of them must be wrong.

well, yeah. that much is obvious, but how will they go about deciding which is real and which is fake? I say catfight to the death.

I suggest to grab a hose and interrogate them with impossible questions. 😀

I love how the cubs look in the last panel.

Thanks! They are, indeed, totally adorable. I love working with them. ^__^

well there is the comparison between santa and sandy an the idea that santa is phat with a PH in it and sandy being a girl as you’ve seen most of the tigers in the comics are not, just say, you know.

Hmmm very intresting turn on events. Now if only both of them could be the real Sandy Claws. Should be fun to see how this turns out.

Based on the twins’ logic, both of them have a solid claim to the title of “Sandy Claws.” ^__^

Honestly I need to learn not to give a Fuck, cause the next unexpected guest I see in my house gets a shotgun to the face MAGGOT!
Oh, just so you know, that’s also my contingency plan for when Shit hits the fan do to a certain democratic president I despise, so don’t go poking your head in around here ok, ok that is your first and final warning, Bucko.

didn’t I already say something about my contingency plan of not allowing strangers into my home and that I would reward them with a shotgun to the face, MAGGOT!?

You did, and I had to delete it. It’s Christmas, and in hoping to keep things in a festive, lighthearted mood, I thought your original comments were inappropriate for this venue at this time. I invite you to smile and remember that the holiday special is a time for the “Draconia Chronicles” cast (and me) to take a little break from their usual drama and have a little fun, just like we all should during this time of year.

So please consider this your warning. It may be Christmas, but I do still pack a banhammer. Thanks. ^__^

aye aye cappy sir, won’t happen again, or can I call you cheify for the holiday?

You know what? I think I may have realized that I have nothing to do, and the only thing I really like doing at this time is…
…crap, quick, somebody help me thing of something to do before I blow my brains out with an endless night of bad Youtube videos. DON’T LET IT TAKE ME!