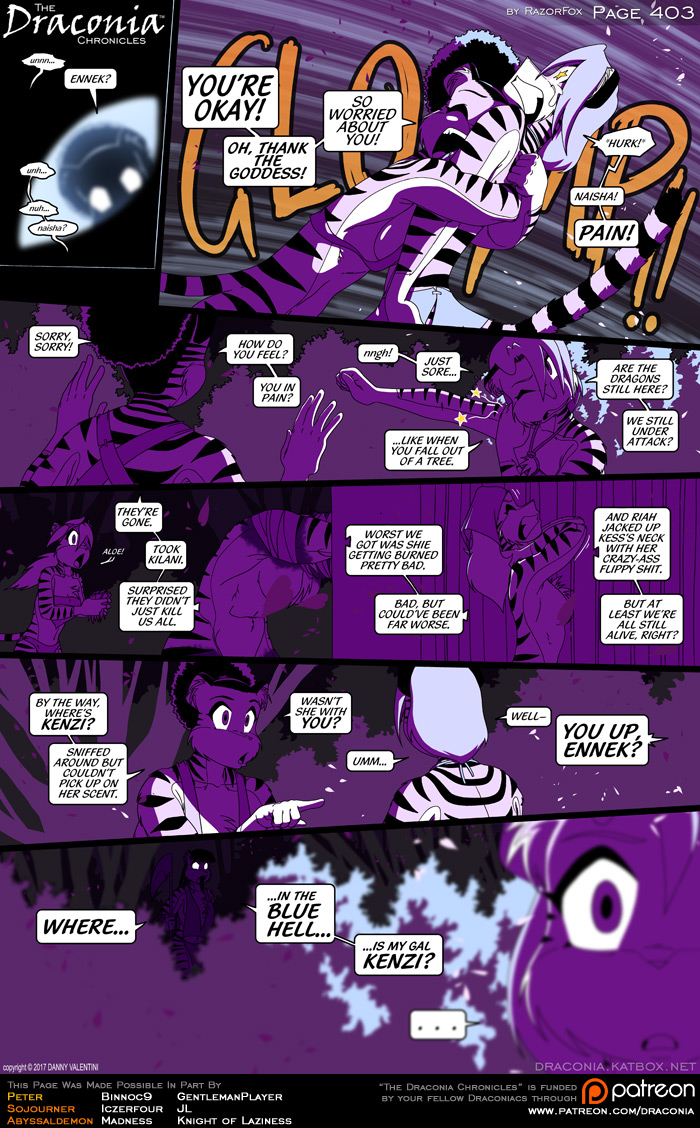 And we’re back!  Thank you all so much for your patience throughout the past month.  For those of you who weren’t in the know, our esteemed webgoddess Mihari discovered something nasty on the far back end of the Katbox’s web guts, and after normal attempts to excise it from the site, it proved itself to be more tenacious than she’d bargained for and Mihari had no choice but to pull down the entire site and rebuild it from scratch.  We’ve been putting one comic up at a time, and per Katbox tradition, we usually go in the order of when each comic was added to the Katbox.  Well, The Draconia Chronicles’ turn finally came up, and here we are!

So welcome back!  And welcome back to the main story.  For those of you who might need a refresher, we’re rejoining the Tigers as they deal with the aftermath of a Dragon attack, and it looks like Ennek might have to be the bearer of bad news.  Will Rula take it well?  Stay tuned…

I should point out that, despite the site being down, comic production continued uninterrupted.  This page was done a few weeks ago, and my Patreon peeps got to see it as soon as it was done.  Pledging your support has it perks!  That also means that page 404 is also already done and will be up soon.  For now, though, I want to let you all savor this page and voice your thoughts on it in the comments section below.

It’s good to be back, and there’s plenty more to come as Chapter Seven rolls on!

Take care, my fellow Draconiacs, and thanks for your patience and your continued support!

“Well, Rula… let’s make this short. Kenzi got her self Killed.” 😛

Aw, but there’s plenty of bushes to beat around.

Woooooooooooooooooooooo! And I’m sorry but Naisha may say she’s not in love with Ennek, but I think it’s plenty clear that she has deep feelings for the girl.

But would Ennek feel the same way about Naisha?

Properly not, but hey, a girl can dream.

if i were ennek i better run and jump in the river. and let the curret take me.

Not if Rula can outrun her.

Ennek: “Look at it this way: Kenzi is beyond all the suffering that Flesh is heir to, and, from her perspective, that is a Very Good Thing Indeed(TM). Don’t think of it as me ‘Getting her killed’, but as me ‘Helping her ascend to a Higher Plane of Existence(R).’ Look, a squirrel!” (Runs)

Yeah and jump in the river quickly .. go where the stream takes you hurry ennek.