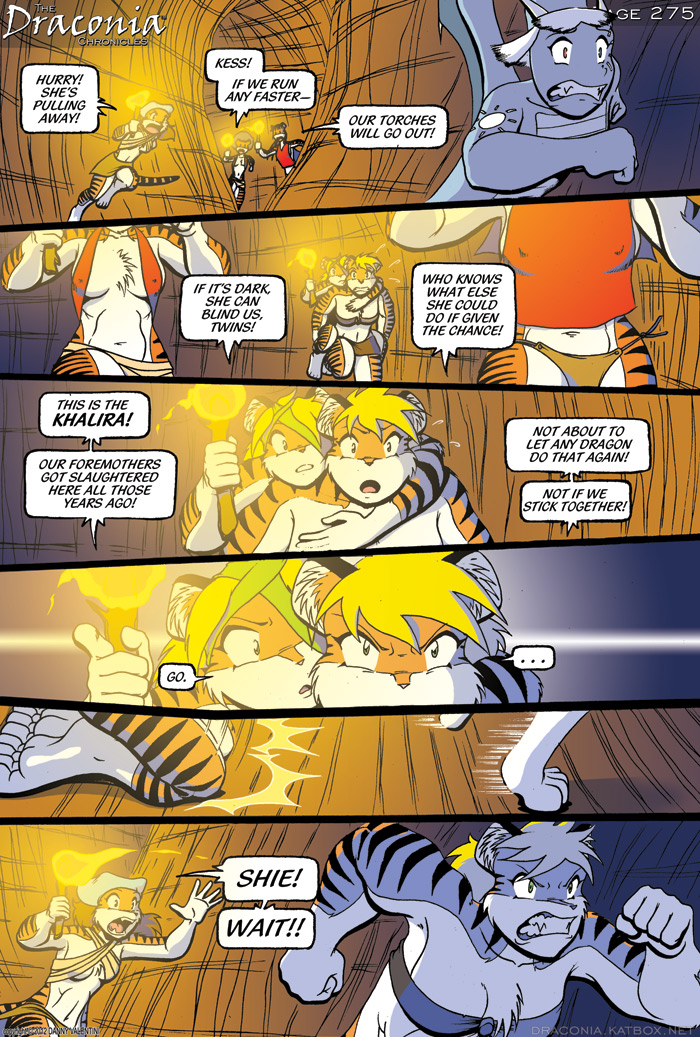 Sorry the page is a tad late.  I tried to get the whole page done in anticipation of Katsucon 18 this past weekend (more on that in a couple paragraphs), but I just wasn’t able to get it all done before it was time to head out.  I could have finished it before the convention, mind you, but the result would have been some really sloppy work.  I love my fellow Draconiacs too much to post a shoddy page.  You all deserve my very best!

Thus, I got back late last night and finished the page this morning.  It’s still Monday, so the comic’s almost-legendary update streak–no missed or late updates in the series’ seven-year history–remains unbroken.

And on this page, we see that Briella might now have a slightly bigger problem than the angry mob behind her.  A bigger, stronger, more muscular problem who happens to be named Shie, and she’s got a mission of her own to fulfill.  What’s next?  Stay tuned, my fellow Draconiacs!

Those of you looking for a soundtrack can pull up “What You Want” by Evanescence.

Katsucon 18 has come and gone, and what a blast it was!  Commissions aplenty, and some snazzy new Draconia Chronicles posters were unveiled.  They’re a Katsucon exclusive for now, but very soon, you’ll have a chance to order them online.  Stay tuned.

After a full year of being here on Katbox, the readership has grown to be bigger than ever before, and increasingly, people are recognizing the comic, and seem downright overjoyed to meet me and talk to me at conventions.  I can’t tell you how flattering and thrilling it is to meet you all, and I thank you for your readership and support!  I want to give some shout-outs to my fellow Draconiacs, both new and “classic,” including CantStopTheVamp, Caroline, Kawaii Nyah, Justin, Phil, Dred Lily, and Seth!  By the way, be sure to check out Seth’s comic, Eclipse Legend.

Speaking of Katbox, more than few thousand of you might have noticed that the site has been mostly offline over the past week.  In a nutshell, with seven comics and who-knows-how-many thousands (if not millions) of unique viewers, Katbox has grown to the point where ordinary web hosting services are just not adequate anymore.  I’ve been given assurances that the outages should be over, for the most part, as we settle into a dedicated server designed to handle Katbox, our buddies at YOSH!, and our combined ever-growing traffic needs.  We should be good for a long time to come!  Thank you all for your concern and your patience, and welcome back!

And with that, the cycle begins anew.  Time to get to work on page 276.  Will Briella manage to evade Shie, or will Shie get first dibs on the blue Light Dragon?  Stay tuned!  ~__^

I know who he is, actually, and I love his work, but you do realize that he’s imitating the “Crocodile Hunter” there, right? Our Dragons aren’t crocodiles, but they are reptilian in nature. I’d be interested to see how he would have handled an encounter with, say, Briella. ^__^

i wonder…will there be a dragon & tiger team up? or will one learn the other’s language? food for thought

Communication might work wonders for the two sides. And there might be a common tongue somewhere, though not everyone knows it. Sombrana did. ~__^

yea, maybe this whole war was because of misconumacation or something like that…i wonder if a tiger could learn magic…

queen oscuras funny when she is angry

Queen Oscura’s a lot of fun to write for. It involves being grouchy and using big words. There’s more to it than just that, but those are the two primary ingredients. ^__^

Come on, Shie! Rip Briella a new one!

Yeah, Shie! Show Briella what you can do! ^o^

Awesome! The coding has been fixed!

no the dragon must live she is to cool

Well, I guess Shie is over her “over-sensitivity.”

It should be interested to see one of the bigger tigers fight a dragon.

GO FORTH AND SLAUGHTER!

Shie’s loose. That dragon’s a goner.