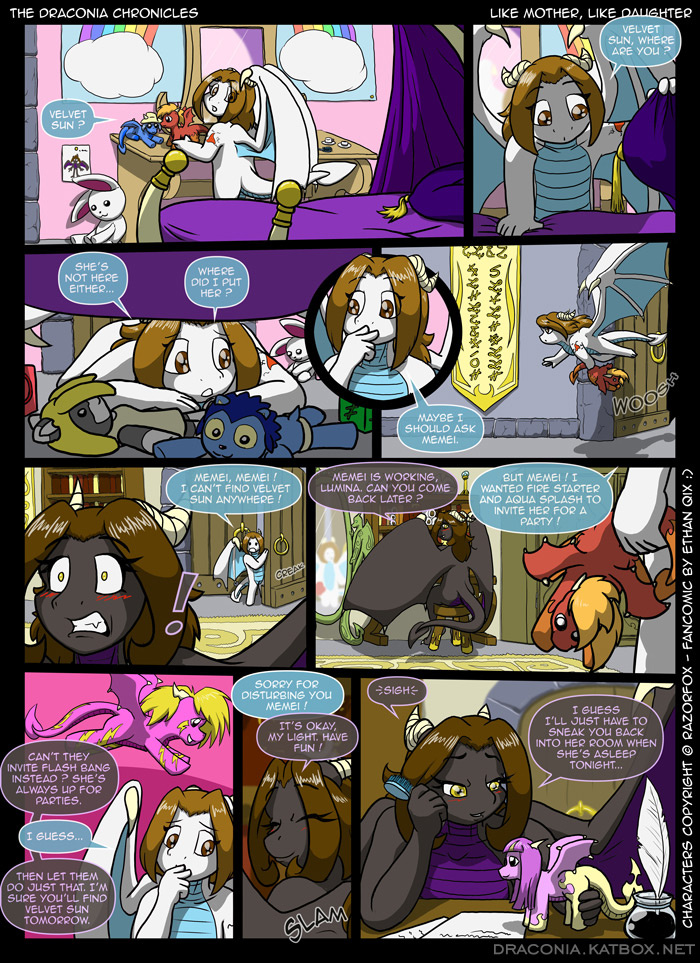 The 2012 Draconia Chronicles Annual continues with an entry from longtime friend of mine, Monsieur Ethan Qix of the great nation of France.  He’s contributed fan art before, and I practically begged him to contribute again this year, as he’s got a real knack for capturing cuteness.  In this year’s entry, it appears that Her Royal Highness Princess Lumina is a fan of My Little Dracony: Togetherness is Magickal, though perhaps not quite as big a fan as her mother, Her Majesty Queen Oscura.  Do we have a new “Queen of the Draconies?”

Also, since I got more submissions than I have Mondays, I’ve added a secondary update day during the course of the Annual, alliteratively referred to as Fan Art Friday.  This past Friday, we showcased a snazzy, sexy piece from Gold Digger creator Fred Perry.

Another bit of fan art will pop up this coming Friday, so be sure to come on back now for more pinup sweetness from your fellow Draconiacs!

As for me, I’m enjoying my hiatus from the series.  Production of The Draconia Chronicles is hugely satisfying, and I’m really, really jonesing to get back to work on it.  But it also involves a lot of late nights and sleepless weekends, along with a ton of caffeinated beverages and energy drinks.  I’m tinkering with the idea of a slightly different update schedule once the series returns the week of July 16, which will allow me a bit more breathing room, and time to do a commission or two here and there.  I’ll let you know more specifics as the series’ return draws closer.

And speaking of drawing closer, Otakon 2012 is just a few weeks away.  By popular demand, I’m making my long-awaited return to the biggest anime convention in the eastern United States after a 7-year absence.  Come on out and hang with me in their massive Artist Alley, and check out Otakon’s website for more information.

Be sure to be back here in four days for Fan Art Friday.  Until then, take care, fellow Draconiacs, and thanks for your support.

thy shall never be too old to enjoy stuff liek this. i has spoken.

I remember seeing a “My Little Dracony” poster from a way earlier comic, I think.

I remember seeing a “My Little Dracony” poster from a way earlier comic, I think.

Was there some of the generation 17 characters in her room? I think the hedgehog and cat?

Was there some of the generation 17 characters in her room? I think the hedgehog and cat?