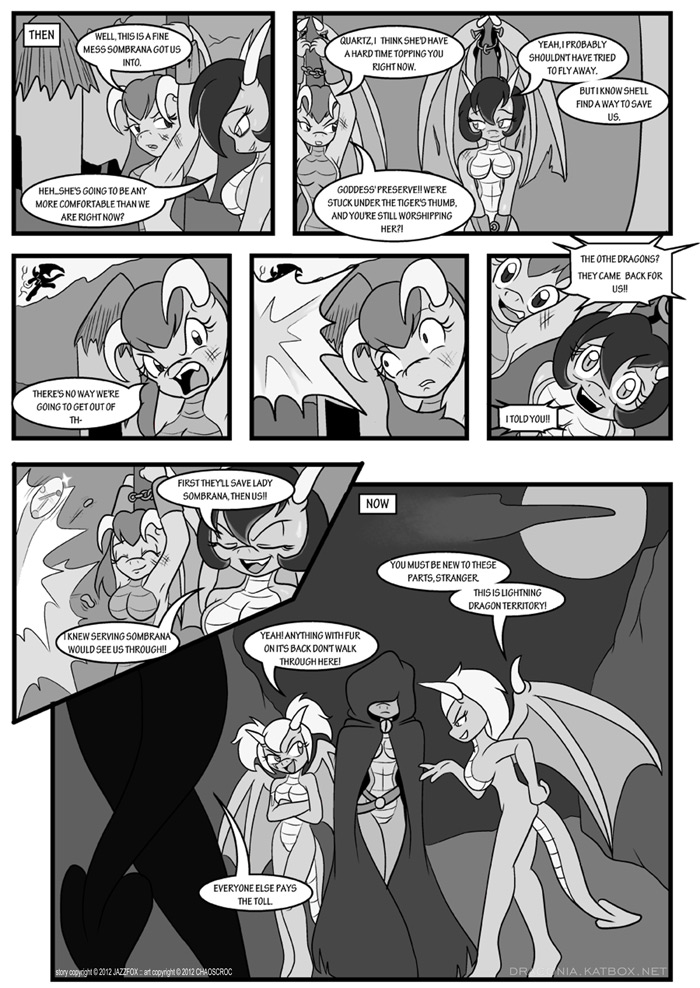 It’s a special set of bonus updates for the 2012 Draconia Chronicles Annual.  This time, we’ve got a collaboration between JazzFox and her awesome writing talents, and ChaosCroc, longtime fan of the series, years before it was ever a webcomic, and a little shading help from Malunis.  I’ll let them tell you more about it:

Years ago, I created this fan character named Quartz, who I envisioned as a neutral character with the war (aside from the hating Sombrana, which seems to be a running gag in Draconia!). I haven’t touched her in ages, until the “Great and Powerful” Jazzfox came to me with a script for it. I do hope you like her, and if so, I plan on doing more with her. So please enjoy this peek into my character!”

Be sure to glimpse more of ChaosCroc’s work at his FurAffinity page (NSFW).  And now, a word from the shader, Malunis:

“I’m an artist who likes a lot of things, usually I draw those things. When tasked with coloring these two pages I thought greyscale would help make it look good. So it was my attempt to practice greyscale coloring. I think I did a solid job given it’s my first shot. I hope you enjoy my work.

I’m going to be trying my own webcomic at some point, you can find out more at my DeviantART page.”

Thanks so much, guys!  And lo, this is a two-parter that we’re squeezing in here.  The second part will run this coming Saturday, but first, we’ll have another installment of Fan Art Friday, featuring a Dragon who’s just too amazing.  ~__^

Love the Schrodinger cats. So does this mean they are both part of and not part of the crew? 😛

they are and they aren’t simultaneously.

THis is awesome!!! I love the Schrodinger cat sisters and Kzzrt is awesome, great rhyming. He could make great poetry.

Every ship needs a killer robot!

Bets on how quickly the Schrodinger sisters die? Maybe in a box that may or may not be open?

So once again, curiosity kills the cat??

Given the nature of this comic, I’m going to say: not for a long time.

The cats remind me a bit of Robert and Rosalind Lutece from Bioshock infinite.

Creepy twins/same person from two different realities… I’m sure everything is going to be fine. What’s the worst that can happen? *says all this while wearing a red shirt* ^3^

You and I have the same idea.

Nix.. You are evil.. What are you going to do to those poor felines? If they become a thing then cool, but you drew their faces so well and those cute fangs.. And you’re an evil person, I’m almost afraid to see what you have planned. But seeing as this comic is a part of my daily routine I’ll see it anyway, at least I have past pages to look back to (Assuming they do meet with some terrible fate).

The cats can be both janitors and buxom beauties. They just have to wear maid outfits.

A) Schrodiner’s car, nice! His experiment flawed but theory sound. Way to put a new twist to the nerdom

B) the unicorn isn’t so hot without his sparkles

A) There was nothing flawed with his experiment. It was a experiement of thought to prove the flaws of the physical model of the time.

B) Agreed. Wonder what he’d look like with japanese cherryblossoms instead of sparkles though.

A) his theory was sound, however, he stuffed a cat in a sealed box with no air holes and a vial of poison by bumpy carriage to the others. Cats dont do well in confined spaces and will freak out. So chances are, the cat broke the vial in a berserk attempt to escape the box. The theory was sound, but he should have used a turtle or lizard instead.
B) Totally

Hahaha! That is an epic pic!

Wait…Kzzrt pretty much AWESOMED the sparkles off of Johan?…wow, I like him already. And the Schrödingers too!

Wait…Did Kzzrt just…AWESOME the sparkles and petals off of Johan? I like him already. And the Schrödingers too!

Is this storyline canon?