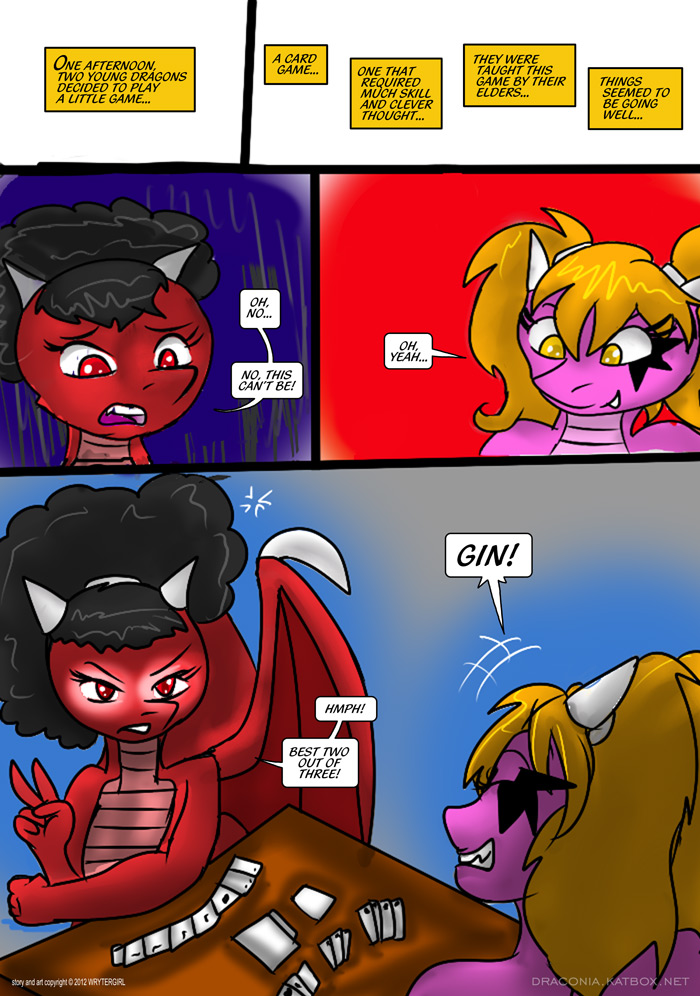 My hiatus is underway, as I embark on a much-needed quest for the ultimate in chillaxation.  In the meantime, over the next four weeks, I’m proud to present to you the 2012 Draconia Chronicles Annual, where your fellow Draconiacs have taken it upon themselves to compose fan comics and fan art to cover in my absence.  We kick off this year’s annual with an entry from WryterGirl, a longtime fan and aspiring artist.  This is her second appearance in the Draconia Chronicles Annual, with starring-role honors going to Fiera and Arc.  Here’s WryterGirl to tell you more:

Hey folks, this is wrytergirl. You might have seen me in a few places. I’m the girl with the purple winged cat (flitten). Anyway, here’s my submission for the Draconia Chronicles Annual. I was looking to do something adorable and funny, like my last entry. So I decided to use two of my favorite little dragons, Arc and Fiera. I thought having them playing a game of gin rummy would be pretty funny, because it reminds me of playing that with my mom and the expressions we make when we play. Don’t worry though, it’s all for fun, and I’m sure Fiera might win a round later. xD

Soundtrack for this would be “Five Card Stud” by Ace Frehley.

Thanks so much, WryterGirl!  Be sure to check out her FurAffinity page!

Just a reminder that, for the first time since 2005, due in part to popular demand, I’ll be attending Otakon in Baltimore, Maryland, the largest anime convention in the eastern United States!  Tens of thousands of people will be out there, so there’s gotta be at least a couple Draconiacs in there.  If you’re in the region, come on out and say hi!  I’ll be doing commissions, selling prints, and, if all goes well, the first ever Draconia Chronicles trade paperback, covering the series’ first chapter!  Be among the first to get your hands on it at this exclusive premiere!

Until then, work continues behind the scenes, so I have to put down my mai tai and get back to work.  More fan submissions to come, so be here next week for more.  Till then, thanks WryterGirl, for the submission, and thanks to all of you for reading.  Take care, my fellow Draconiacs!

Most amusing, I got a good laugh out of it heh.

ohhh Razor! that was a low blow 😛 just when we think we'll see that will happens you go put up a guest commic! not that they cant be great and a nice break some times… but..but? WHY NOW? XP

hey the art work is great i like it

Back from Florida… and this is CUTE!