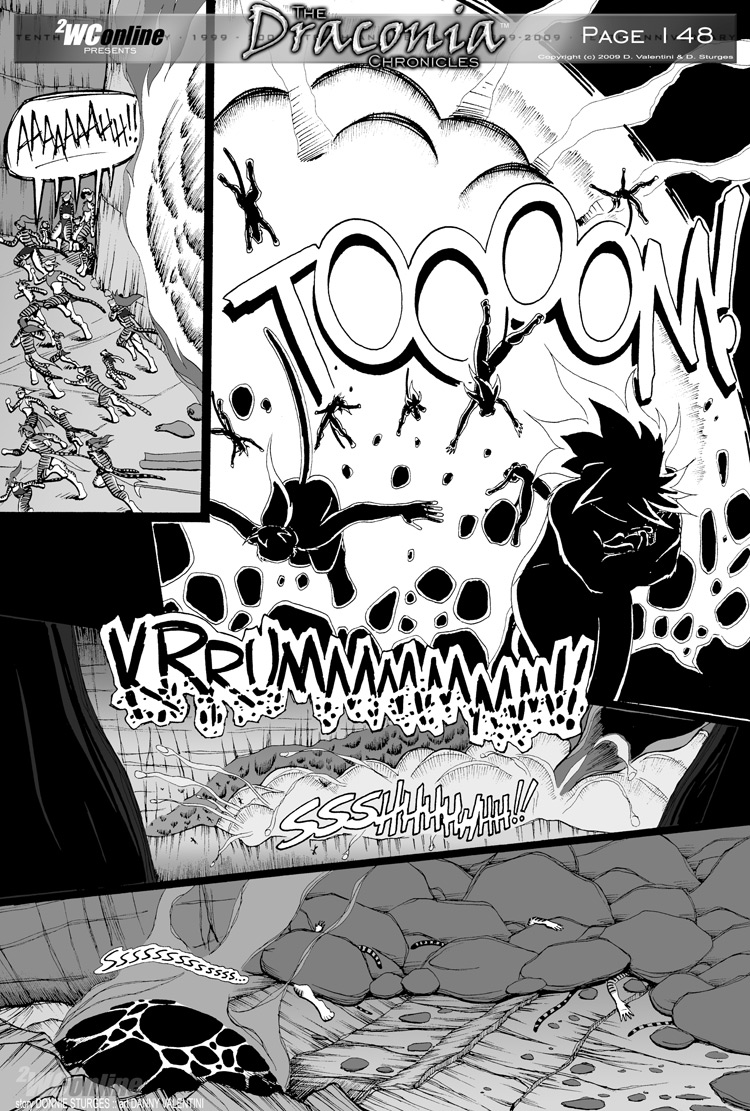 Is that Captain Cheng in the street there?
( Big Staring Eyes)

And is that Mace from Dreamkeepers on the left hand side of the 5th panel in that there alleyway by the brass armored goon?

Omigosh, THANK YOU for mentioning him and the comic he’s from! I used to read that and Prelude all the time and I wanted to do so again but forgot what it was called. 😀

I see someone dressed as Aeris. Also, anyone who talks the talks has yet to fulfill his desires.

The ones I pointed out or some other ones?

Mace and whip, Cheng, and Miranda.

I think i see Aeris or that could be me…

Betting this is some set up so Kylar ends up getting accused for treason. And then Drayven rises to the throne without Kylar by his side.

look, I don’t want to copy what everyone are saying, but they are right, the purple dog at the bottom left of the last panel looks alot like Aeris from Final Fantasy VII with that pink dress.
Cool cameos by the way 🙂

He truly believes his fathers advisors would allow him to replace them? I know he will be king, but does he understand the hallways of power even half as well as he thinks he does?

Not sure whether this prince is a budding hero or a festering villain. Then again, it’s politics, so who can say.

You can tell a lot about a man by just asking his wife, or seeing if he’s embarrassed by his own screw ups.

I doubt he has a wife, yet.

….Dont know if scared, or excited…

Sorry boy, but I don’t trust royalty. If your father being a Tyrant lets you succeed him on the throne, then he must be pretty sure you’ll be at least as much of a Tyrant than he is.

The prince does have good intentions but in the end power corrupts us all.

Is that how it goes?

i still like butcher’s version from the boys, “with absolute power comes the absolute certainty you’ll be an absolute c@#*”

Someone here is not like the others here. I wonder who it could be. /looks at kid in the alley
And what exactly was wrong with your father’s reign exactly? The people look happy, the army seems disciplined and in control of itself, the roads and buildings are in good repair and I haven’t seen any evidence of there being a war on. So… what exactly is wrong and how is it you plan to make it better?

He calls his father a tyrant. Why do i have the same feelings you do (that the ONLY person disadvantaged by his reign was the son)?

So much Tyranny that kids are allowed to run around on the streets! The horror!

But seriously me-thinks he’s the corrupt one here lol.

i think i see Puzzle in there too!

Anyone else notice how the guards in the final panel were duplicated? I suppose someone got either lazy, or smart.

hmm let me guess on the advisors: a seemingly innocent old man with a long chain around his neck (acts as if he is naive old codger, but he isn’t), a man in a dark green cloak with black hair (a brilliant liar and schemer), green eyes, and a forked beard, a bald eunuch (master of whispers), a handsome dark haired man in bright, colorful clothes (why do I feel he might be giving Kylar suggestive looks), a cruel conniving power hungry blonde woman (one who might also be incestous…eyugh), a pudgy frog-faced man (though in this case, he might as well be a frog), a cunning, witty, lawful just dwarf (who prefers to be called Imp or Half man), and stern, cold middle aged man (the master strategist).

Surely you’d know by now Drayven would be a lion and not a wolf if we were going that route. 😉

true try….so he’d basically be the honor bound wolf lord that everybody will love….let’s just hope that all that honor doesn’t get his head chopped off…or get him killed at a wedding.

I’m getting both good and bad vibes from Drayven

Referring to his father in the past tense before he’s even dead? Warning!

That’s a really powerful ingredient (and if anyone’s wondering, the japanese character ‘虎’ in the bottle means “tiger”)

So this is how Ronny becomes Nekonny.

The guy with glasses, the one that becomes Nekonny.

yeah i forgot about him