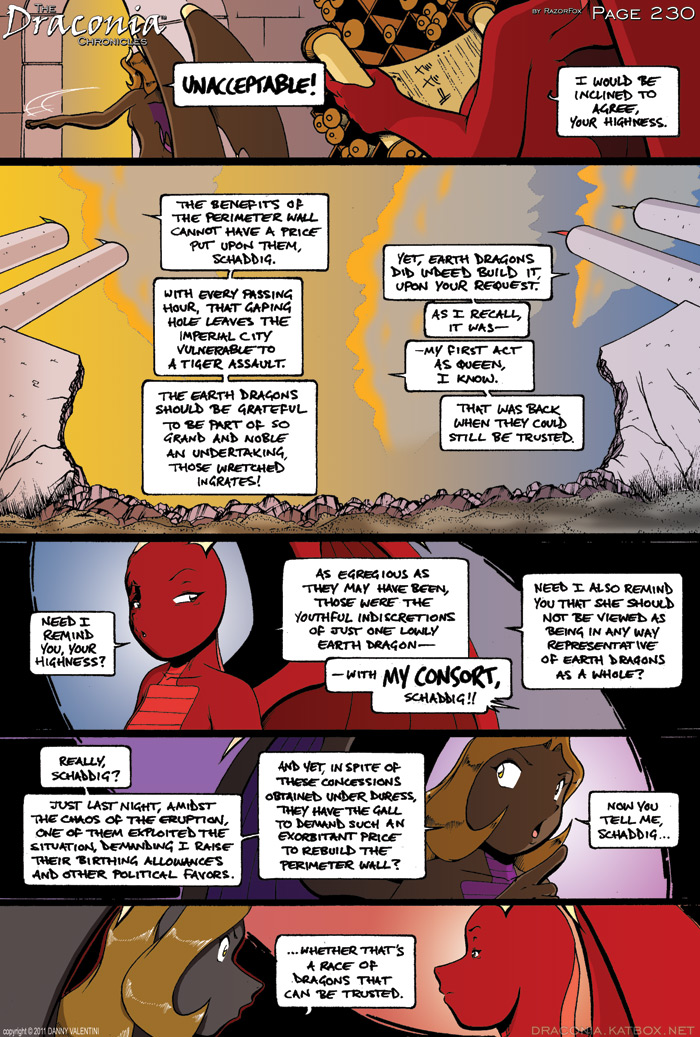 Well, I know that while Her Majesty Queen Oscura has her share of fans out there, she’s got far more detractors than anything else. In fact, there are a lot of people who outright hate her. And nothing makes your enemies hate you more than when you’re right, and Queen Oscura might just be onto something in regards to the Earth Dragons, what with Gaia‘s fling with Oscura’s consort, Ghislain, and Eone making demands in the midst of a crisis and then trying to back up her demands by threatening to blackmail the Queen. Now they’re asking for what the Queen feels is way too much money to rebuild the collapsed section of the Perimeter Wall. Was the Queen’s reluctance to grant them additional rights justified?

Don’t you just hate it when she’s right?

Those of you looking for a soundtrack for this page can pull up Queen Oscura’s quasi-official theme song, “Gold Dust Woman” by Fleetwood Mac.

As those of you who faithfully follow my Twitter feed may have noticed, I’m in the middle of moving to a new residence, and I’m actually writing all this on the eve of the big move. In fact, I’m also writing this before Super Bowl XLV happens, too. I’m predicting a smooth, easy move, and for the Pittsburgh Steelers to edge past the Green Bay Packers.

Then again, over the years, my predictions have been laughably inaccurate. I’m hoping to get at least one of them right this weekend. Did I mention that I hate moving? No? Well, I hate moving.

Also, if you glance at the Con Schedule section on the right side of the page, you’ll notice that we’re now less than two weeks away from Katsucon 17 in National Harbor, Maryland, just barely outside of Washington, DC. This will be my 17th consecutive attendance of Katsucon (perfect attendance, baby!) and my 13th consecutive appearance in their Artist Alley (since 1999). If you’re going to be there–and you’d BETTER be there–then come on by the Artist Alley and say hi. Since the comic’s gained such a huge new audience since moving to Katbox, I’d love to meet our newest Draconiacs. Look for the giant Draconia Chronicles banner, and there you’ll find me pressing the flesh, making with the mirth and merriment, and slinging the ink on commissions. Hope to see you there!

Well, back to moving. Take care, fellow Draconiacs, and thanks for reading!

Indeed I hate her because of her ego Is too massive + they have a ginormous advantage over the tigers and I don”t like it!!!

How mature, claiming people hate Oscura because she’s, in your view, “right”.

Wait, they use money at all? Violence is the only currency we’ve seen up until this page…

ಠ_ಠ Yeah, what DO Dragons and tigers use for money? Can you answer us RazorFox?
PLEEAASE? (◕ω◕)

And Miss I’m not gonna show my face for suspence McBoobs lady is FINALLY HERE! XD

Okay I couldn’t get back to reading and commenting on my favorite comics yet, but just so you know your fateful fan is still here and STILL loves this chick… Although the original comic ended shortly after this part and we didn’t get to know concrete stuff about her, but still. 😛

p.t.(post thought): Wonder how long will it take for someone to commission a pic about her and Milo. 😀

Still as good as the last time I saw this page. I definitely like her.

Now I’m not even sure what planet the main characters are on. Did anthros over throw earth or something?