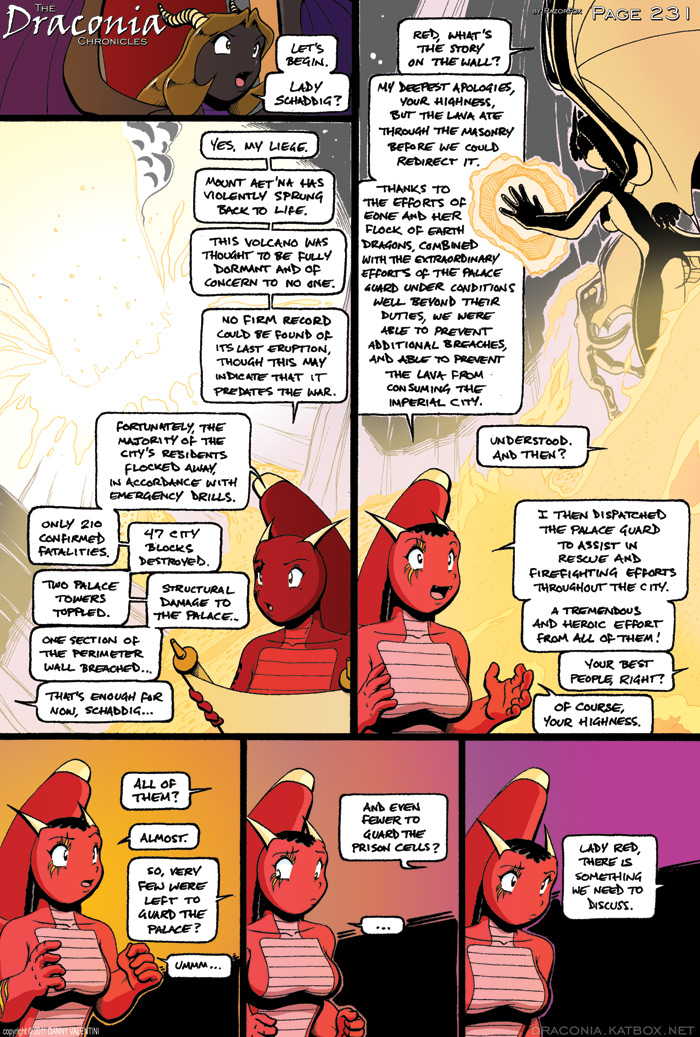 Okay, so after last week’s little Valentine’s Day Special (which can now be found in the Katbox Gallery), we’re back to the main story. When we last left Queen Oscura, she was ready to lay down some justice. It looks like her juggernaut continues to roll onward, with Lady Red as her next target.

Those of you looking for a soundtrack for this page can pull up “Ring of Fire” as performed by former American Idol contestant Adam Lambert. Really surreal version from one of the show’s all-time best performers.

And to answer your question, no, I don’t actually watch the show, though I did actually follow one season several years ago. I even called in to vote. I joined the bandwagon for a season and decided not to ride again. Once was enough. Had fun, though.

As I write this, I’m getting ready to head out to Katsucon just outside of Washington, DC. Yup, it’s Friday morning. You, on the other hand, won’t see this until Monday morning, at which point, I will have returned from the convention and I fully expect to be absolutely dead tired. I expect to have a great time, though, as I usually do at Katsucon. I also got a message on Facebook telling me that there might even be a Draconia Chronicles cosplayer in our midst. If this comes to pass, you’ll see photos real soon.

Also, by request, I’ve added a bunch of stuff to the Katbox gallery, so be sure to check the RazorFox section for all the bonus pages the series has had over the years. Enjoy!

Well, that about wraps it up for me. Take care, fellow Draconiacs, and thanks so much for reading! ^o^

These two know each other, eh? That makes sense… and it explains a lot!

Good for this rhino, this rat doesn’t have 4 ninja turtle disciples

I am ashamed this didn’t pop into my head

You deserve my respect for this, and i gladly give it to you.

Now Dante you wouldn’t be planning on buttering ol Farron up to hawk a certain sword now would ya?

I was always hoping these two knew each other, makes sense that they could.

Or she could be buttering him up to get him to go along with some sort of heist, where he’ll end up being the fall guy that the police catch.

ZOMG! Carmelita and Sly Cooper had a daughter?
I so totally didn’t see that happening… I mean,Since when where they ever really an item?

He’s only in trouble if he gets caught 😉

fo some reason i feel like this is a flashback, dante and Farron look younger.

Nope, present time. Dante just changed up her hairstyle (usually we would signify a start of a flashback) as for Farron we made him a bit more saturated as his hair looked grey-er then intended, as people were mistaking him for being much older then he actually is.

Second, love that new hair, I wonder if she did that to impress Farron 🙂

I can’t help but feel that Farron was cowering in fear in the second to last panel.

Aw, Farron, don’t you know better than to argue with people who have horns?

Don’t forget to add, “and bigger then you”.

wait….Dante and Farron know each other…also looks like the fun never stops on this weekend…I just came back from a Comic Con in Atlantic City

And cue the persistent thief. What trickery will Dante stir up this time?

Hopefully sesame can get her bad ass fire sword back. …..for a discount.

unless Dante already traded it for a new outfit (which she is currently wearing.

She could have. But shes a thief by trade so im sure she cant just go to any shop to sell. They would probably be suspicious. Like you can barley carry that and you use light weapons and armor. You didn’t steal this did you? So instead why not go to a merchant you know wont ask questions. Plus she probably stole that new outfit any way.

I’m assuming that tavern keeper is an Indian Rhinoceros (or possibly a Javan Rhino)?

We just went with generic rhino. x3
I did have an idea to do the Nurse-Joy/Officer Jenny joke and have several clones of the horse Inn-Keep for Grinder’s Inn own all the taverns but then explaining that would be too complex so bleh. xD;

Talk about a hot looking mink, Dante would be a tough rival against Minerva mink for sexy looking lady. By the way, what kind of creature is that little four legged furry creature? Kind a cute.

Ah yes, those are called “Kitmur” they are often kept as pets by Fera and Dahaki. Kind of like “cats” so to speak.

I have been wondering, what kind of animal is in panel one? It has teh cute.

Anyone else see that it kinda looks like Farron was about to cry in the fourth panel?

Anyone think Farron looks like he’s about to cry in the fourth panel?