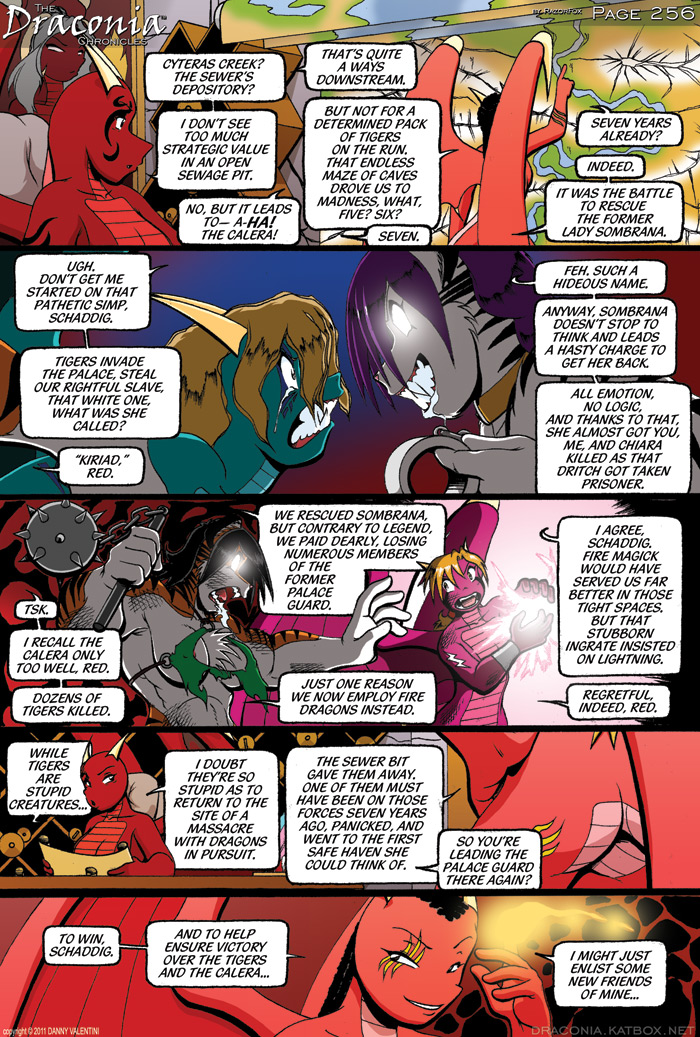 So not only is Doug (can be short for Douglas) a newbie in Vortex but he’s a recent graduate from a college I gather.
Also, the next two weeks will be intriguing and intense. Who will stay and who will be “released”? I bet Doug doesn’t even know how they are released. If that’s true, then he’ll be a great friend and ally to Jills group. You guys agree?

Saw this at a booth at Fur-Eh, decided to check it out and I’ve been hooked reading it all in one night. Really like what’s going on here and the character development, this page happened to come out literally a few hours after I started reading this comic. Looking good, keep it up with content!

That’s cool!
If you like this comic then try….
Twokinds
UberQuest
Dreamkeepers
Desert Fox (this one is also on the Katbox, http://desertfox.katboxad.net/, enjoy)
Lackadaisy
Peter & Company

Thank you so much! I’m sorry I wasn’t able to be at Fur-Eh myself to tell you about my work here, I was volunteering at a games conference over the weekend. But I’m so glad you decided to come check it out and are enjoying it!

It’s fine! It’s my pleasure being able to join this community and find all this the awesome work you guys do! Really glad to be apart of viewing all of this! Will I be able to see you next year possibly?

Maybe? I’m not sure, scheduling stuff literally doesn’t get any farther away than this time next year 😛 I’d like to but it depends on what else is going on at the time and if I get sucked into something else!

Pete’s special, he gets the special exam, won’t that be fun! XD
Poor Jill almost looks too tired to worry…

FACK! I just realized I Forgot to put tattoos on their necks! DAmmit I’ll get to that as soon as I get home.

Good LORD and none of us noticed that? O_O
I’m pretty sure that’s the only reason why none of us tried to jump at your throat because of it. XD

Okay first of all it may be just me or the perspective, but does Myra(the redhead human) have an even bigger pair of bombshells(Kuu be glorious) than before? :3

Second, these guys are starting to remind me of something…
They have:
– specialized armed forces
– tech more advanced than anyone else we’ve seen so far
– institutions set up to make random stuff like short films
– supposedly an educational system
– they still make orientational videos that would barely survive the 80’s
– still fail to teach their new recruits how to do their actual job before they actually start it

If in one of the later pages they also add that their health system is horrible I’ll be pretty sure that these guys are basically Americans. XD

I so imagined Pete and Alex judging that orientation like those famous YouTube folks that judge movies rather harshly.

You know, that has kind of been bugging me too as of late. The only plausible explanations I could think of would either be that (1) they kind of anticipate several of their captives to escape and thus don’t care or (2) there was a huge oversight on this. I could imagine the latter option going as something like this…

Additionally, it could be the fact that they know about it and are keeping a watchful eye on them. These two might not know about it, but someone higher up might.

Also, didn’t they have neck tattoos on the back of their necks?

And no one noticed that Jill already had a mark on her neck?

Oh, RIGHT! I wanted to ask the same thing, but I always forget. How come no one even mentions that fact? Even if someone else made the tattoos they should’ve at least said “Hey one of the new subjects already has our mark on her neck. Maybe pay extra attention to her.” since they did know about Pete’s “type-77 reaction” and that happened “on the field”.