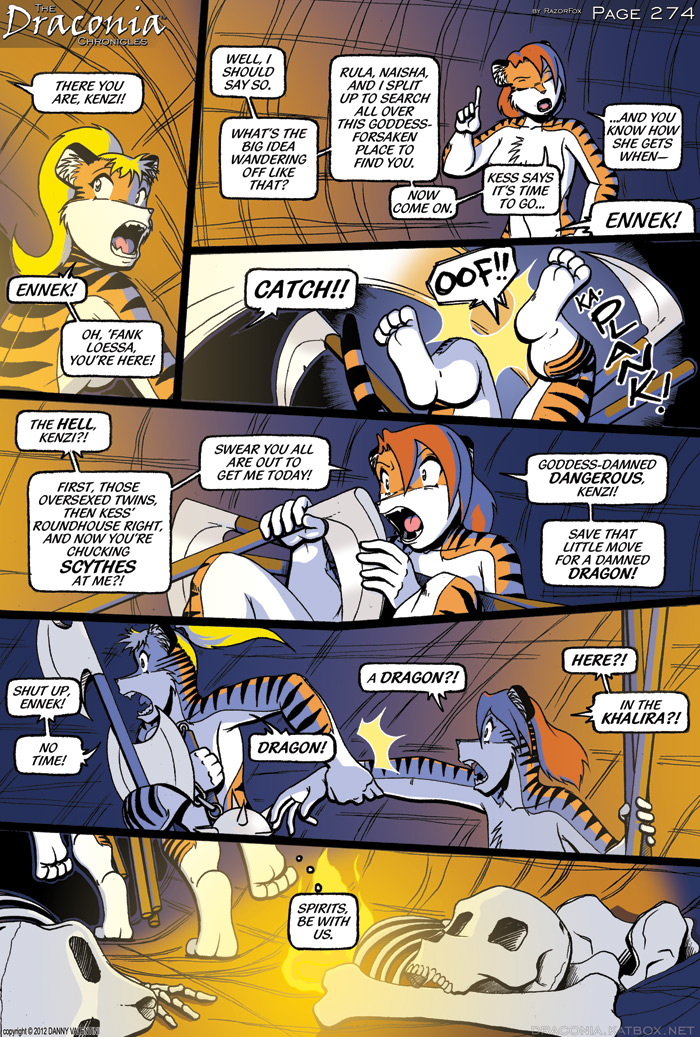 If this is your first time visiting since last week’s update, welcome to the new and improved Katbox.net!  We’ve redesigned the site all the way across, with plenty of improvements for you, our dear readers, and for all of us here at Katbox, including all the contributors and our web team.  Big thanks to SoulKat and Mihari for all their hard work in the sitewide overhaul.  It’s been in the works for weeks, actually, but we finally made the big move for all the comics over the past few days.  It’s much easier for contributors like myself to do updates and manage our content, and hopefully you’ll find it a much easier to navigate the site and post comments.  I’m really diggin’ it so far, and hopefully, you will, too.

Just a programming note: Next Tuesday is Valentine’s Day, and so I’ll be suspending the main story to put together a little Valentine’s Day bonus comic for next Monday.  What sorts of chivalrous shenanigans will I be serving up next Monday?  You’ll see.  ~__^

The main story resumes with page 275, due out February 20.  You can make it until then, right?

Also, we’re just under two weeks away from Katsucon 18!  Katsucon holds a very dear place in my heart, as it was the very first convention I ever attended back in 1995, and I’m proud to say that I’ve been to every single one to date, including appearing in every single Katsucon Artist Alley since 1999.  I plan to be there again this year, armed with Draconia Chronicles prints, and accepting commission requests throughout the weekend.  I love getting to meet my fellow Draconiacs face to face, so if you can make it to National Harbor, Maryland, just outside of Washington, DC, the weekend of February 17-19, come on in and say hi!  Get more information at Katsucon’s web site.

Finally, as I write this, Super Bowl XLVI has just wrapped up.  I’m always thrilled when my Super Bowl picks come out right, and this year, despite everyone else picking the New England Patriots to win, albeit by a narrow margin, I sided with history and picked the New York Giants.  Last time these two teams met in the Super Bowl, the scrappy Giants wrecked the Patriots’ otherwise perfect season.  I pegged the Giants to be party-crashers once again, just like in 2008, and they delivered.  Congratulations, Giants!

And with that, I am a very sleepy fox.  I shall see you all next week with some Valentine’s Day fun.  Until then, take care, fellow Draconiacs, and thanks for reading!  ^__^

Sex crazed twins? [WHERE?!] Kess roundhouse? [lame] Scythe chucking? [ouch] And now Briella being screwed over by accidental discovery? [Do i feel sorry for her] Is it just me, or does our little brunette Ennek have some problems today? Granted that I don’t kick the living shit outta Kess right now

Check that…. i misread. Kenzi. not Ennek. [dammit i f**ked up again]

Well, maybe she’ll go easy on Kenzi. There’s a Dragon loose in the Khalira, so they’ve got a bigger fish to catch, gut, filet, and fry. (This is what happens when I respond to comments before dinner.) ^__^;;

Oh and Btw Razor. You DO have a cast page now. Start setting up the main characters of this freakin coming! you know how long i’ve been DYING to see the cast?!

Finally… Someone finally thought to pick up some souvenirs. I mean, you visit the Kahlira and only come away with a lousy tee-shirt (which looks good when wet…)? I see that some people are getting avatars now… any more advice?

Soon, good sir, soon. Still figuring out the layouts. The goal is to put up a new profile or two each week with the updates. Who should I put up first?

@SteelTiger: Thanks for pointing that out! When I was on my old site, prior to page 225, the pages were formatted to a 750-pixel width. Katbox uses 700 pixels. We had formatting in place to squeeze them in, but it looks like that didn’t cross over into the new look. We’ll get that fixed up. Thanks again! ^o^

lol i think the twins are right… someone needs to get ennek to RELAX!!! ONE way…. orrr THE OTHER! >xD

Thank you very much! Hope you enjoy the story so far, and my Tigers and Dragons look forward to giving it all they’ve got every week! ^__^

You know, I’ve been thinking…I really hope Briellla survives this so she can open a can of Whoop A#% on Lady Red. ^o^

Then again, if she does survive, this would raise questions of the tiger tribe’s strength.

Both solid points. Let’s see if the motivation to deliver an ass-whoopin’ on Lady Red is enough to keep Briella one step ahead of the angry mob hot on her tail.

I’m guessing serious permanent injury that she survives and blames on Red.

That might be her biggest motivation to stay alive right now: Revenge! ^o^

Is there anyone in this comic that doesn’t obsess over revenge?

Now that I think about it how do these things work anyway because the lightning dragons were able to use there magic even though the tiger group they were fighting had these weapons too. And weren’t some of the dragons also wearing armor as well?

Well, it might mean that the battle might not be as lopsided as some might have thought. Maybe the Tigers are just leveling the playing field. ~__^

So far, there are only three people in the comic I’ve come to respect fully.

1) Tam’syn- Like Kilani, she wishes for an end to the war, and she is the one destined to brind that peace and unity. 2) Kilani- She was disillusioned by the war and the horrors it brought. Not only that, but she spared the life of the one dragon I’ve come to respect the longest. 3) Chuki/Lumina- let’s face it! She is one of the few innocent characters we see in this comic, not yet corrupted by Oscura’s bigotry.

Unless you count Oscura’s brainwashing her many times. Then she technically is.

Well, there’s still good in her. Put it that way.

so it is pretty sad of what war does to people

Maybe they’ll all grow up one day. Keep hope alive.

Good observations. I like to think that respect comes in many different forms, but I hope to expand your list as the story goes on. Hope you’ll continue to join me for it. ^__^

I hope Briella can Use her Wit to even the odds!

Something tells me that the cave doesn’t appreciate the death of others, the in fighting I bet does something bad right now o.o It surely isn’t going to be a very pretty outcome in a big way.

Still you would think that if the dragons developed armor to try to protect themselves from the tigers weapons that they would were more of it. Or is the armor made of a metal that enhances there magic?

Good idea, except that armor’s heavy. Dragons have to be very mindful of their own weight and what they carry, as it might otherwise compromise their ability to fly.

It only gets worse for Briella -_-“

…but hopefully more entertaining for the rest of us. Her goose isn’t cooked quite yet. ~__^

That depends on you’re definition of “entertaining,” I don’t think anyone wants a repeat performance of what happened to Gia.

“I will crush you in the bones of your brothers, and your sisters. I will burn them in the flame of darkness, and destroy all who defy my choices. Child of light, heed my words; you are not who you wish to be, become that which you are, and stand strong against your fate…” -Gavir (From the book i’m writing, looked like it could be relevant to her situation.)

I’ll make sure Briella gets the message. I’ll write it on my Rainbow Dash stationery. ^__^

It’s a powerful motivator. Who doesn’t want to stay alive just long enough to see the defeated look on their enemies’ faces?

But then there are those that go completely out of control because of it.

Poor Briella doesn’t want to hurt anyone nor has she, she just wants to get away from those mean nasty tigers.

Good luck trying to convince the Tigers of that. Especially with a language barrier. ^__^

So how is it then that fox girl can speak both tiger and dragon. I imagine if she can cross the language barrier than others can.

I’m still not exactly sure where they got the weapons. Help?

I’m shore they were just lying around with the tiger bones. There very messy creatures.

I believe Kenzi said something about seeing weapons in one of the bone pits a few pages back and she went to go get them o:

Kobra and Kingpose each have it right. Back on page 260, you might notice a few weapons lying amongst the bones. Good eyes, fellas! ^__^

Think that being a demon you would use blood to write more ink. But how much is a bottle of writing blood cost?

Depends on the blood type: plus, you have to figure in the cost of anticoagulants, preservatives, etc….. 7@=Q

“They are sharp; you are stupid!”
-Tiberious Skarva, Esq. upon being similarly “handed” a sword.