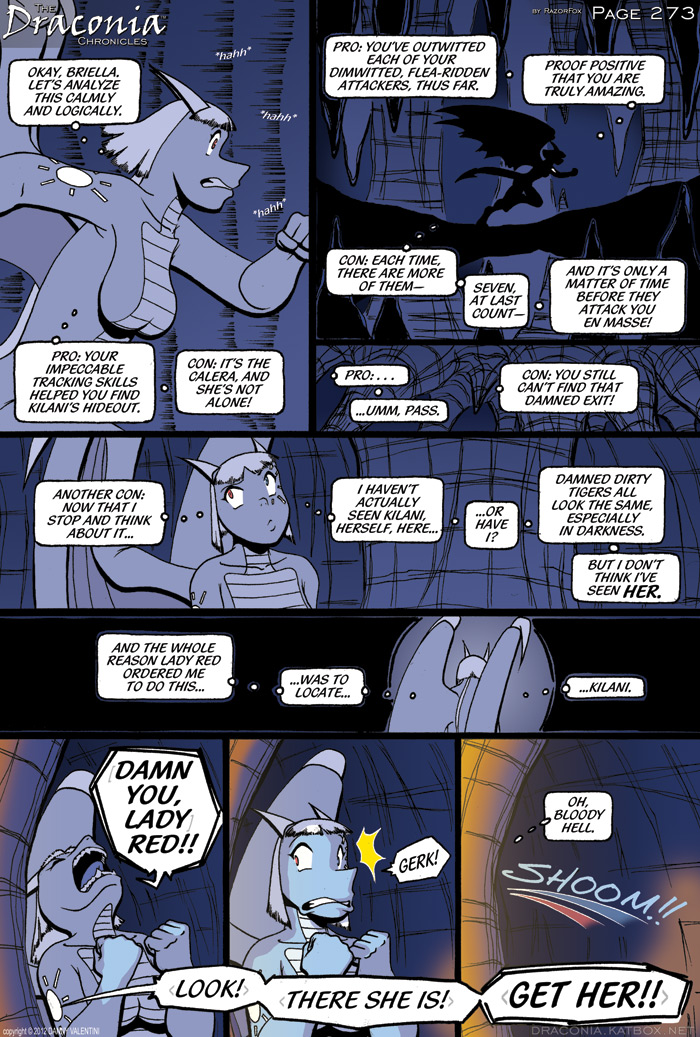 So, it appears that, after last week’s pep talk from Kess, Briella‘s Tiger troubles will now come in the form of an angry mob. Better run, Bri’.

Those of you looking for a soundtrack for this page can pull up “Sad Sweetheart of the Rodeo” by Harvey Danger.

Last week, I resumed work on the Katbox Kares series of drawings, showing off fun and/or tasty pairings of various characters from across the Draconia Chronicles cast.

This was all started last March, when Nixie of Anthronauts fame, and I launched an impromptu 48-hour fundraiser to help out victims of the devastating earthquake and tsunami that struck the Sendai region of Japan that month. We raised just north of $1,400, all of which went to the International Red Cross. In return, I promised to put together a full-color, two-character drawing for every $100 raised as part of that fundraiser.

I’m proud to say I’ve now hit the halfway point. If you’re a member of a mature audience, then feel free to feast your eyes on Tiger twins Rula and Naisha, showing just what they’ve got to offer. Enjoy! ^__^

And there’s more to come. I’m hoping to get another one done this week, with a Livestream most likely going with it. If you don’t want to miss it, the make sure to follow me on Twitter and/or join the “Draconia Chronicles” Facebook group to keep abreast of Livestreams and other announcements.

Anyway, it’s back to work for me. Take care, fellow Draconiacs, and thanks for reading! Keep spreading the word!

Yes Razor is a sick puppy.., You RULE Razor!

Why thank you my fine red furry friend.

Well, that set of viewer comments fizzled quickly instead of going out with a bang.. :p

0.o lol i think my computer just epically failed… most of the comments just got deleted now that the new site came up! xD (btw it looks really good)

It’s not your computer. With the site overhaul, it’s possible some of the comments may have been left behind, and others might not have been able to have been preserved in their original order or context. All part of the great joy of moving. ^__^;;

Thanks for your patience.

This layout is weird and amazing at the same time. So I feel I must steal your face. ^o^ And as I sit here, eating my salami, I am just now realizing that Briella and Kess are very alike. They both hate their superiors, they’re both cocky as all hell, and they’re two that I would least want to be with were I in this comic. o3o

If she dose it’s going to be even harder to get the smell out, poor
Briella