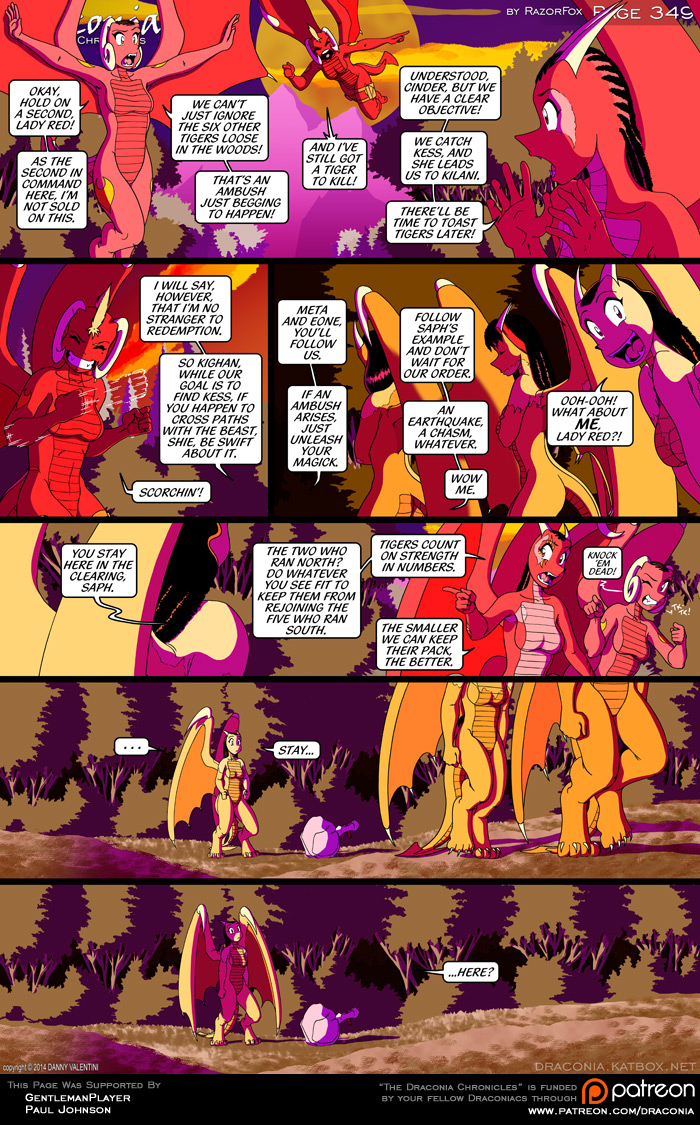 Can Saph‘s bubbly enthusiasm allow her to hold down the fort against Ennek and Kenzi?  And will Kighan and Shie cross paths again?  Stay tuned…

Those of you looking for a soundtrack for this page can pull up “I Will Lead You” by Filter.

Big thanks to GentlemanPlayer and Paul Johnson for pledging to support The Draconia Chronicles at the $10-per-page level!  You, too, can help fund the comic through Patreon!  Any amount, big or small, helps cover the costs of comic production, and pledging as little $3 per page gets you exclusive access to sneak previews of new pages as they’re composed!  Thanks to all my current patrons at all levels, and thanks in advance to all future patrons!

In other news, I’m confirmed for NekoCon 17 this November in Hampton, Virginia!  It’s a bittersweet announcement–more sweet than bitter, I hope–as I’ve decided that after 16 years, it’s time for me to retire from doing Artist Alley at conventions.  I still plan to drop in on a con or two here in the mid-Atlantic, where I’ll just poke my head in the door and say hi, but I’m bowing out of the Artist Alley after this year, with my farewell appearance coming at this year’s NekoCon.  This isn’t a decision that I’m taking lightly, but as the landscape of the Artist Alley has changed over the years, I’m increasingly a weed in a field of flowers.  Not that there’s anything wrong with weeds, mind you.  I think weeds get a bad rap, but I digress.  I’ve been doing it for over a decade and a half, I’ve had an amazing run and I’ve outlasted countless other artists who’ve joined me over the years, but all good things must come to an end.  So, too, must my convention odyssey.

So, with that being said, I’d BETTER see you at NekoCon this November!  ^__^

Back to work on the next page. Take care, my fellow Draconiacs, and thanks for reading!

Awww…I kind of feel bad for her. She’s like the kid that got picked last or the one given the worse task in a team game. T_T

On a lighter note, I’m actually impressed that the fire dragons placed the earth dragons behind again. I take it that there still isn’t any trust between the elements.

Lady Red’s determined to get some mileage out of Eone and Meta. Sounds like Saph’s ticket is already punched, though.

there not gonna do shit. hopefully when red relizes that she’ll think twice before dragging dragons into this. red didn’t bring eon and meta in this because she trusted them. she brought them in this because she wanted them for fight for the dragon kingdom. pacifists or not. which reminds me, razor fox. i noticed in the past pages that we saw little glimpses of how life is in the dragon kingdom and i know its not crucial to the story, but will we be able to see more of life in the dragon kingdom, in hopes of ansewering some curious questions. for example: how the hell do the dragons capture fish?

I don’t think so. Judging from how she worded the orders to the other earth dragons, she appreciates Saph actually acted CORRECTLY without orders.

Notice first she praised Saph, then told the other earth dragons to follow her example… literally NAMED her and told them to do what she did.
Second, she told Saph to watch for the two tigers she had no idea where they went.
Third, she told her to do whatever she deemed necessary to stop those two tigers.

The only thing the didn’t do (and for Saph, this is important), is tell Saph this was important and she felt she could trust Saph to do whatever was needed without telling her what do do. She could have said something like “You have proven I can trust you to do what needs doing.”

while I think your right here I have to say it’s still the boring job. but not every important job is glamorous.

Unfortunately, Saph doesn’t understand Lady Red is actually trusting her far more than she trusts the other earth dragons.

Well, this may end without a fight. Saph is inexperienced in any combat, Ennek wants to be a pacifist, and Kenzi seems to be more intrigued by Saph than wanting to kill her. Another thing, odd how Eone listens to Red blindly here. What happened to that earth dragon pride she had?

she’s going to follow them just to show she doesn’t take orders from here. i bet on it.

Well, Eone did say that she was going to do the bare minimum and only when commanded. Being asked to follow the Fire Dragons constitutes a direct order. Question is, what, if anything, will Eone and Meta do from there? Hmmm…

well they we’re also directly ordered to wow her if an ambush situation happens.

Its never a good decision to leave 1 teammate behind. At least 2 would be a better decision. You are just an easier and tempting target for your enemy ( unless its a trap ). Though, if something incredible happen and she manage on her own. Well… Never know.

Maybe Lady Red sees something in her…

Hey, a dragon who doesn’t need the commander to hold her hand and give her an order?

Saph’s will be fine. The earth dragons are pretty much an unknown to the tigers so if those that went north double back it would be safer for them to do a large circle away from Saph leaving her safe. Also Meta and Eone going with the main group is better because they are safer not caring about the job with others then being left alone to be distracted by said lack of caring for the job.

well looks like Kenzi gona finally get her chance to figure out what these earth dragons intrigue her so much, just hope Saph dose not get hurt in the process. also I’m fairly confident lady Red’s gona regret splitting up like this; especially when it came to Saph’s safety, sure she can throw rocks but I highly doubt she has the stomach to hit any one with them at all.

If anything does happen to Saph, Lady Red would bear the responsibility. Maybe Lady Red has a hunch Saph’s up to the job…

Saph IS up to the job and Lady Red knows it. The problem is, Lady Red didn’t tell Saph of her opinion.

Saph thinks she is being abandoned when she is in truth being trusted to do exactly what she has already done… whatever is needed.

The only failure on this page is Lady Red didn’t let Saph know how much she is depending on her.

I’m sure she could easily make a nice seat for herself with the available materials. ^__^

Would she also have a gavel made of gravel, and a cart so she could travel?
…
I’ll show myself out now.

SAPH! THIS IS A TIGER IN DISGUISE! Lady Red said do whatever you wish. Be creative.

Oh? You’re a fox? That’s even more of a threat.