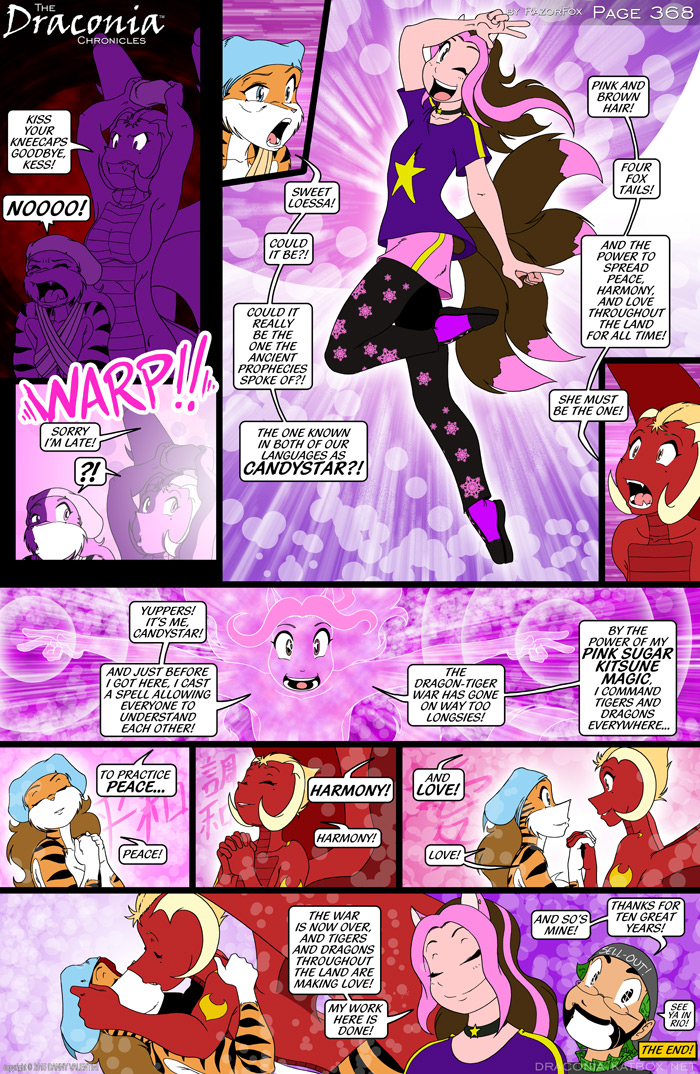 Welp, I’m calling it a series.  After ten years and 368 pages, and after a hefty payment from Katbox‘s newest anonymous benefactor Candystar, I’ve decided to retire.  And I don’t just mean from Draconia Chronicles, but from life in general.  Let’s just say that Candystar provided me enough little green reasons to add her into the comic and to allow her character to end the war that I can now afford to retire at the young age of 36 and spend the rest of my days sipping drinks with little umbrellas in them on the white sandy beaches of Brazil.  I like to think that I’ve earned it, even if it meant shortchanging my fans and selling out my artistic integrity.

That’s what I thought.

Anyway, thanks again for your readership over the past decade!  I leave here with many, many fond memories of late nights, energy drinks, and the best fans a guy could ask for!  Thank you all so much!

I’d write more, but they just announced that my flight is boarding.  First class, baby!

Take care, my fellow Draconiacs, and thanks for reading!  Oh, and thank you, Candystar!  ^__^

Inb4 someone takes this seriously because youre two days late xD

Why, whatever do you mean? It’s not the first of the month. Oh, and hooray for in-flight wi-fi. First Class perk. It’s pretty sweet. ^__^

HAHAHA! you in that Final Panel made me fall out of my chair laughing

But… All of the bacon… Who’s gonna eat it?

And if you’re gone, who’s gonna record all the dragons and tigers makin’ out?

This is hilarious! Would love to think you’re gettin a feel in the last panel! STAMPS all around!

If this was posted on April fools i think i would be a bit happier XP.

Not sure what you’re talking about. It’s April 3rd. It’s just the next, and now final, page update. Ever.

Two days late? This page was done in half the time of a normal page. I was early!

So… thats what you look like? i could of sworn you had orange/white hair and pointed wet nose… almost like a fox.

I figured that the series finale was the right time to reveal my secret identity. You all have earned it! ^__^

I hope its april Fools otherwise Ill write my fanfic as an end to the webomic…lol!

But Candystar already did that. Everyone’s making love. Wouldn’t that be everyone’s ultimate ending? ^__^

But Razor, its the parts inbetween and the “climax” of the story…. Also if you are in Brazil, how can I hang out with you and have geek debates? art jams and cool stuff like that!

Flights are cheap, and you can save on baggage fees by doing what I did and just packing swimsuits. All you need when you’re living in a high-rise condo with a balcony overlooking the luscious beaches!

But…Razor got the money he deserves.
and I got to see hot lesbian dragon on tiger action.

Though, I’d be careful to keep most of your greenbacks in something other than Brazilian currency – their economy seems to hitting an inflation binge. Be a shame if you had to come back after a year because your money got reduced by an order of magnitude.

Would be great, if you didn’t do the same joke a few years ago, and on April 4th too. http://i1113.photobucket.com/albums/k517/GuardianOfGaia/draconia189a_zpsxzvm3ey8.jpg

So your retiring from the draconia chronicles 368 pages a world record so that means the comic is over right. concragulations /__/. have fun in brazil hope you see some good aztech and mayan ruins.

Ruins? I’m funnin’ and sunnin’ on the beaches, my friend! The view I’m enjoying is tooootally different!

those ruins whould be in mexico

if this is real im gonna kill somebody

Please direct all your venom to Candystar. She’s on the forums.

im only joking, I figured it out before doing anything drastic

And the smoochies are well worth it! 😉

What a rip off! We don’t get to see dragons and tigers tipping the velvet and forming daisy chains. Exactly where is a dragon’s vagoo anyway?

BACK TO OUR REGULARLY SCHEDULED MAYHEM!!!

Still waiting to hear if this was a joke…

so many unanswered questions so much curisouity