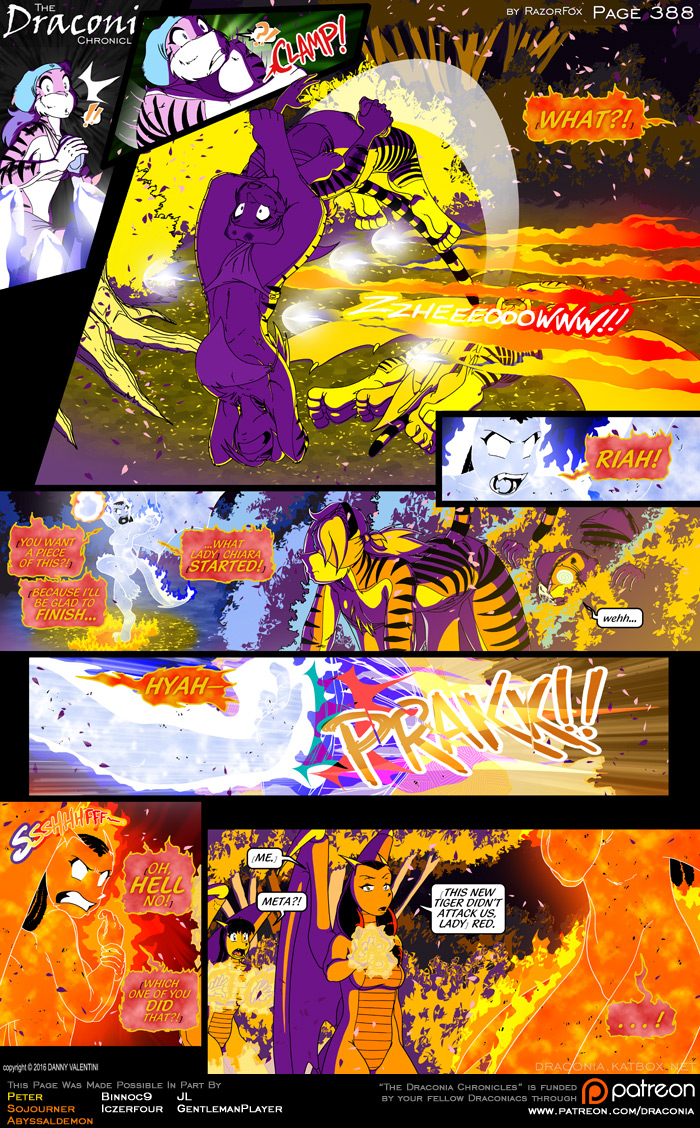 It looks like we have not one, but two new challengers!  Will Meta and Riah survive Lady Red‘s fiery wrath?  Stay tuned…

Take care, fellow Draconiacs, and thanks for reading!

“The new day is a Great Big Fish!”

Lady red needs Calgon to take her away

Unexpected to say the least…also I’m liking Meta more and more after every comic…it appears she’s the only one with some *looks to Oscura* COMON SENCE! *cough* sorry about that ^^’…

Something in your throat? ^__^

Yeah….*cough* agh…it’s clear Now….
Anyway…are you going to put up the cast soon? And we STILL have no clue to where are Enek and Saph….Razor!! Y u do this?
;-;

Because I love you all! ^o^

Oh and we love you to Razor!

So razorfox did you like your birthday present it is a comic page from your old past comic strip book.

besides you know I think red is gonna figure out oscuras dark ambitions with shaleigh or in tamsyns flash back dream with kilani so in the valley of the damn so when do we get to see that.

Meta, this may not be the best time to try and play peace maker.

Meta is unknowingly wrong. Riah took down Kighan a few pages back, so she did in fact attack the group. However, unless someone (Kess, Riah, or Kilani) says something about it, no one else knows.

This, this actually looks promising!
If we can get some reasonable people on both sides of the conflict like this, and they can beat down the crazies, we may have a chance for some actual dialogue and understanding. I’m not hoping for too much, but even a “honour among enemies” case would be better than the current situation, and there are some pretty influential and high ranking people in these two groups.

Yeah, I’m getting a really strong “best girl” aura coming from Meta. Logical, calm, and willing to act when she deems the time right.

hopefully, there isn’t a stupid/crazy tiger around who decides to attack Meta (due to her showing her power)

Of course, there will be.
Riah is right there.

As it always has been.

So shall it always be.

I knew Meta would save lives.
As to the question of whether Riah or Meta will survive… I’d say “BOTH”.

Remember, the earth dragons are quite possibly the most versatile dragons here.
We have already seen them do things both defensive and offensive.

I have the opinion Meta is at least Lady Red’s equal in power.

I think she could ISOLATE everybody in the area if she wished.

Alright Valkeiper2012 here is a good idea meta and saph and the earth dragons started to depart take there hatchlings along with other dragons who agree with them and go north I can tell the others who are loyal to sombrana is gonna start a civil war .

CALL the water Dragon!! , make her cool off.

From out of the forest comes Riah to the rescue, what a save, did Kilani survive the fire blast? I thought she was just under it and it passed over her. By the way ya gotta see Zootopia, I loved it so much I saw it twice, great story and the animation is just terrific.

You know if the tigers have bows and arrows and slings with a zhrite metal ball they might almost have the upper hand I said almost. zhrite is the dragons kryptonite . it absorbs there magic plus tigers have brute strength.

I can’t tell if she’s more or less enrage!
Then again, the forest is still intact…So that’s a good sign, right?

Blue fire burns hotter. She has calmed down slightly, or is in shock at the “betrayal.”

I guess Kess is the only cat who *doesn’t* always land on her feet! =D
…
Okay, I’ll leave.

Well, Meta certainly seems to be quite observant. I’m liking her more and more.

I honestly don’t know if anyone has said this, but I do think I know who started the war, and I use the parallels from our world to identify this.

The Dragons live in more stylized buildings, and a more developed caste system, complete with an organized military. I have yet to see this from the Tigers, and instead see a more hunter-gatherer society, and I have yet to see the phrase “they aren’t even people” from the tigers that the dragons have repeatedly stated. Tigers, while more antagonistic toward dragons, see them as actual threats, as dangerous enemies, but as a people. This seems to pattern the European and Roman Expanses and Empires.

So, using the history of European Colonization, it can be said that the dragons may have tried to “civilize,”

or otherwise disrespected the tigers, and it escalated from simple skirmishes to an all out war. Of course I could be wrong, but since Lady Oscura is using her daughter as a weapon against the tigers (which, I might say, can backfire horribly should those charms ever wear off), I still think the Dragons are to blame.

Of course, I could be wrong, and the only one who has any idea on this is our dear artist RazorFox.