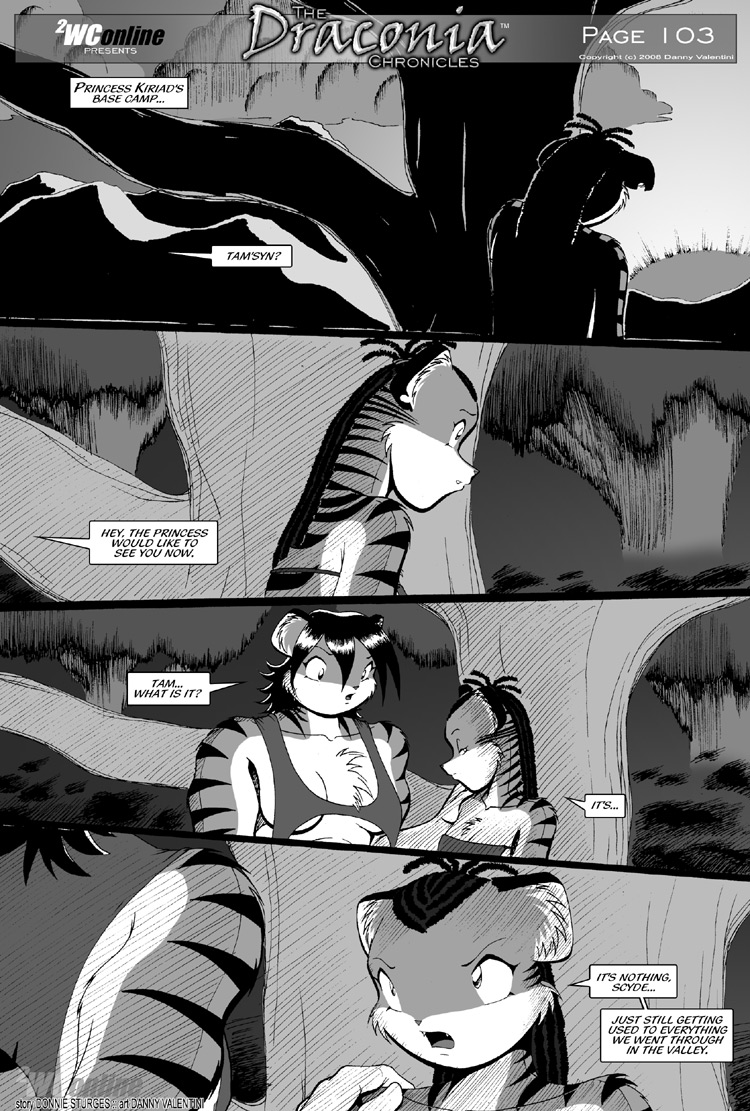 Did Farron just compliment Sesame in his own special way?

Sure does seem that way.

Sure sounded like it. She doesn’t seem to realize it yet.

Eh? Oh… uhm… well this would be awkward. But there’s a good reason Sesame said “HOLY SH-” in the previous strip. That reason is his problem.

Hey, he has a lot of shit to sell and carry around – hence he is a ‘Pack Rat’. Plus it’s all his worldly possessions too, after-all it isn’t called ‘Farron’s Extraordinary Traveling Shop’ for nothing.

Still, it shows he has prodigious strength and durability to carry it around.

True. Some Fera (the name of the anthro race in this comic) are just blessed with certain abilities, kind of a lucking out in the genetic lottery.

I think it’s safe to assume magic pack is light as a feather and expands to fit what’s inside. Can’t have a traveling shop unless it either floats or has wheels!

We saw Sesame kick a heavy pod miles away in a moment of anger and nobody commented on how powerful that kick was. Try kicking a football (whatever version of “football” you prefer) even a decent fraction of that distance.

Now, you’re surprised he can carry a large backpack that is obviously magical?

Those are Dosar, kind of like lizard-sheep-hybrid creatures! They aren’t so much used as mounts as they are for their meat and wool. I really should do more with the wildlife in Evyr rather then just showing background images of them. I may release some more info on the About-Page 🙂

Maybe make an encyclopedia about creatures or something.

Well there is a Wikia about UberQuest! http://uberquest.wikia.com/wiki/UberQuest_Wiki I will definitely consider adding that in the near future ,I implore the fans to have a go at it as-well~

Awww sesame seems to like farron! Lol cat and mouse is in natural…

Technically a rat. She is still an inexperienced adventurer that needs some guidance.

Well… I guess and yeah rat is it! I haven’t read the bios… I usually don’t… And we all know what he is gona do now! Lol… He… Is afraid to ask sesame for a… Little favor… Maybe a quick favor that can pay off the debt… Since that little incident…in the river… I think farron is little bit excited… I am not makeing any sense right now… Don’t judge I am tired as flip… I can’t think worth a bufkin… Guh… So many ready lines and I still don’t know why I am rambleing DISREGARD THIS WHOLE POST EXCEPT FOR THE CAPS!!!wiiialhilmsiidiigdisregardthiswholepostexceptthecaps…

How do you know so much about this comic?

Give you a clue. Rearrange these words.

think I they it created.

It’s funny, I totally freaked out when Razorfox would reply to the comments. Seeing other people react that way is hilarious.

Oh ok i was going to say how dafuq does this person know so much about the comic and can answer all our questions.:)

Saw comic once (think it was in the reader’s digest) with a cat and a mouse sitting.

The mouse says “You’re not on the business end of the food chain”.

Is it just me or is farons pack locked with a crystal? And also is said crystal cracked? Plus i have to admit that faron probably isnt going to the “funhouse” for fun. Am i hitting any marks?

Enchanted pad-lock what you’re seeing is a key-hole, the bag is ‘magical item’ in and of itself, it has it’s own little back-story. It’s useful beyond what it seems. Farron is going to the brothel for all the obvious reasons any man would. He has no ulterior motive other then satisfying himself.

I said it once ill say it again.
This comics gets better every update.

So then… where’s Sesame going to go?

With a bag of merchandise that large, I’m surprised Farron doesn’t have the entire bag enchanted. He said if anyone touches the lock… bad stuff happens. But what if someone cuts the bag open with a knife? It already looks like it’s bursting at the seams.

It’s very special/durable, it will be explained later. We promise you will enjoy the story behind it.

If you truly want an idea why you don’t want to cut it, google the term “Bag of holding”. His pack is basically that, since the webcomic is loosly based on fantasy RPGs and the term comes from the original RGP… DnD.

I do play DnD. I know this bag of holding, of which you speak.

Here’s an example from another webcomic I follow – Precocious. It’s a kid (play)villain bootcamp… http://www.precociouscomic.com/archive/comic/2013/07/14

LOL. I read that comic and enjoy it.

There is another cameo people have yet to point out :3

In this page or another page?

This page! It’s the guys who Kibbles set on Fire from Page 3. Well at least two of them.

Is that Skidd talking with the pink haired girl in the first panel ?

She really asked him that?

Aww, it’s adorable, isn’t it? She saw him naked, and now she wants the rat-dick.

I mean let’s be honest, when was the last time you dangled something in front of a cat’s face and it DIDN’T try to paw at it a bit?

Except that’s not the case at all, cause this isn’t some kind of shitty perv anime. Or Las Lindas.

Farons a player
is he like this comics glenn quagmire?

And now I want to see a closer view of the vixen in the last panel, because I love foxes. Sorry Sesame, as cute as you can be in your own way, you got nothing on that gal. ;3

Btw, its funny how she wants him in her group after the bath. I guess she likes bad boys or something xD

Or maybe she just thinks he’d be useful to have around and actually doesn’t crave his dick. Crazy thought, I know.

I agree with you, I’m pretty sure she found him useful from the moment he saved them and she would actually like him to teach her how he one-shot the monster. (even though I ship them)

hmmm so his name is Farron Jaques?

Yep. We have other last names for all the characters too! Just got to find the right time to drop them. :3

His last name is.
Also there’s a typo there I just noticed, it should be ‘Jacques’

Miles, you’re FAR too young to know what work she does(!)

And yet he’s still 5. And able to fly a biplane…

they grow up so fast

how will farons bag go through the small door of the olde brothel?

I gotta confess so far I thought that Sesame was meant to be another battle hardened warrior, but seeing her as an adorable and (at times)naive rookie is just nice.

Also poor Sesame is all left out, she’s so cute on the three panels in the middle. :3

Yes, Sesame,he’s going in there. The incident at the river gave him a problem they can handle.

He may have been planning to go there, anyway, but you gave him a need/reason to.

They’re in a town, Sesame is alone, Sesame has damaged armor… (yes, I know it looked like leather armor, but work with me here).

I think Sesame is about to visit a blacksmith shop and we meet another new member of the party.

Rather interesting how nobody has mentioned Claire’s change in attitude once she found “civilization”. She seems to think she can now do whatever she wants.

She seems to have forgotten she is actually worse off than a fish on a fisherman’s hook.

Say Phuufy, is it alright if I compliment you and your husband for drawing cameos of yourselves on this comic page?

aw i didnt realize it at first but Sesame is holding her tail when asking Farron to join her- well them ^^ it’s so cuuuuute!

Indeed! I want her on my side any day.

Hey, when did Yuki get her bikini top back?

Evidently, when we weren’t looking.

Ruby is officially sexier than Tina and Yuki

The Cannonball: the ultimate swimming pool combat attack. Guaranteed to see your enemies get all washed up.