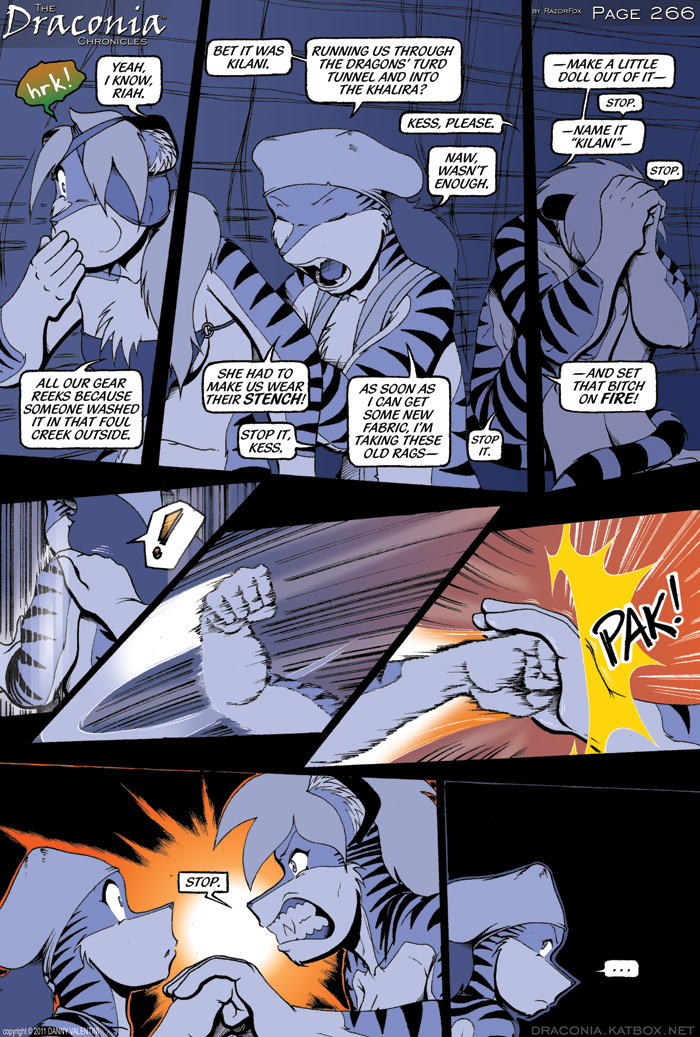 Witch is worse: Being free smelling bad, and in a graveyard. orBeing in a dungeon were you will likley be horribly tortured everyday.

Kess might say that both of those things suck and would ask for a third choice.  ^__^;;

she looks PISSED! but that reflex? DAMN! once again you outdo yourself razorfox. why cant you put yerself in that story? be interesting! that right there is even better than that camo ability!

Shie’s wisened up to Kess’ little defense mechanism.  Kess might’ve crossed the line with one of the “big cats.”
The story isn’t interesting enough on its own?  Alas, there’s no place for a plucky little fox such as myself in this story, nor am I really in the market for any OCs that would require rewriting the rules of the Draconiaverse.

You already have one fox in there already, why not another?

What you don’t know is that he’s secretly the head of this “conclave” Shaleigh mentioned. As such he started this war between the Tigers and Dragons for his own personal gain and amusement and has been orchestrating their every move from the very beginning.

Well that would make sense he is the creator after all.

Eat it Kess. EAT IT.Also: Oh lawd, Shie’s scary o.o I mean, I know how they said that Shie was the more brutal out of her and Rhea(?), but still. Zomg. I hope this makes Kess be less “PRIIIIIIIIIIIIIDE” about everything. Those are LIONS sweety.

Here’s some food for thought for Kess: if Kilani did, in fact, crush the egg and/or kill the whelp (like Kess said she would have done), then Queen Oscura would have pushed much harder in her efforts to kill the tigers. By sparing Lumina and raising her as Chuki, Kilani actually protected more dragons, since there was that doubt about whether she was alive or not. Also, Lumina still has those memories, even locked away. She could ultimately be the one who ends the war in a peaceful way, rather than her mother’s twisted genocidal end.

All good observations and postulations.  Kilani could have done far worse by NOT caring for “Chuki.”

It’s just getting started.  Hope you’ll continue to join in the fun!  ^__^

Wonder if Shie’s fed up with Kess’ behavior because she’s an older sister herself and knew how much it hurt her when she thought Riah was pissed at her. She can sympathize with Kilani very easily right now.

Great observation.  Maybe Shie has been a surrogate sister for Kess in Kilani’s absence.  Shie can put herself in Kilani’s “shoes.”

even without a person like you in the story my fine orange friend. you somehow impress a person like me with a knack for a greatly awesome story. i need to start thinking about putting together a story for a videogame i play…. guess you got yerself a guy who’s about to write fanfiction about ya! [and i pray it sticks]