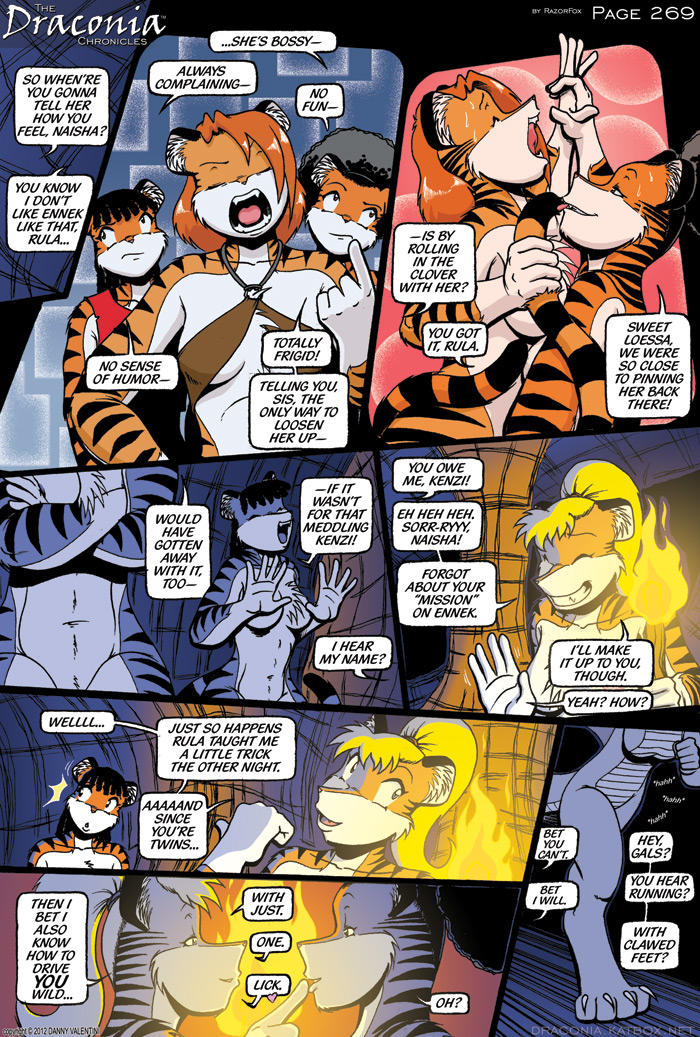 So back on page 258, you might remember how Rula and Naisha were attempting to get under Ennek‘s loincloth, so to speak. If this comic is any indication, the twins aren’t giving up anytime soon.

Those of you looking for a soundtrack for this page can pull up “Jungle Boogie” by Kool & The Gang, the unofficially-official theme song for Tiger lovin’.

I want to thank you all for making the 2012 Draconia Chronicles Calendar the best-selling calendar in the series’ history! While I won’t go into specific numbers, the 2012 edition beat the previous record-holder, the 2011 edition, in every single category, and I have you all to thank for it. Calendars have been shipped worldwide, ranging from the local Draconiacs here in the vicinity of Norfolk, Virginia, the current world headquarters of The Draconia Chronicles; to all four corners of the US mainland, namely Maine, Florida, California, and Washington state, and a wide swath of states in between; Canada, including a returning customer in Newfoundland, and for the first time in Alberta and Saskatchewan; and beyond North America, including mailings to fans in Sweden, Germany, France, England, Scotland, and, for the first time, Croatia and Australia!

I am simultaneously damn impressed and sincerely humbled by this show of support. The calendar serves as a big fundraiser for the comic, and this shows that I’ve got an amazing fanbase. Thank you all very much, and I hope to reward you all each week with snazzy new comic pages and other goodies throughout the year. And yes, I’m already brainstorming ideas for the 2013 calendar. It’s never too early. ^__^

With that, I’m plum tuckered out. As I write this, I’m coming off of a major binge of work, errands, traveling, and partying as part of the New Year’s weekend. Notice how I didn’t mention “sleep” as part of that list, as it was virtually nonexistent. You’re lucky I was able to form sentences here tonight.

Thanks again for reading, my fellow Draconiacs! Keep spreading the word in 2012! Take care!

*Just stares at the page*

Staring is most welcome.  ^o^

Yeah…sorry about that…kind of got distracted with the mental
images of those “ulterior” motives and that trick.

Back to the topic at hand, was that a Scooby Doo reference I
spot.  Asking because I head that old
music from the cartoon playing in my head.
It’s just a pity that the moment is going to be ruined.

Jinkies and zoinks!  Someone spotted the “Scooby-Doo” reference!  Get this man a Scooby Snack!  ^o^

Would kill to see that technique she is talking about. I mean we finally get to know how many licks it takes to get to the center of her tootsie pop. I just don’t want that kill to be the dragon, death kills the mood.

I dunno.  To a Tiger, a successful kill might just be a turn-on, sometimes.

Then again seeing as how the tigers have no weapons, are still weak form there time in the dungeon, and are stuck in the same cramped low light system as everyone else. If the dragon had some offensive attacks like Fire or lightning, then they would be the ones running.

Good points, but I think most Tigers would also consider their bodies as weapons, though Kess might have fallen short on demonstrating that.  ^__^;

Two images come to mind with the Tigers & Dragons running around in the caves.  1) Monty Python and the Holy Grail, “The monster of AAAAGH!  Run AWAY!”2) Star Wars, Episode 4.  Han chasing the Stormtroopers around the Death Star, turning a corner, and running into–even more Stormtroopers!

What about that one were every one is chasing one another after going down a passage or doorway and then suddenly it’s a different variation of the chase. Forget were that came from but everyone does it.

I just love the almost hyper sexed tiger twins, instead of endless mindgames and angsty comics, it’s a nice and refreshing direct way that they handle things. Add on top of that the fact that stuff like the light from the torch is so well done, and you have a comic I check in on often. Well done. 🙂

The thoughts that are rushed into my head after reading this..^////^  *Oh Dear God, Please Forgive me for My wanting imagination! * ( Goldenboy ref )

LOL!  Sorry I could only show but so much here, though it sounds like you’ve already compensated for that with your vivid imagination.  Enjoy the show!  ^__^

Well… this is odd. That stuff Jm over here just said reminded me of me playing Chris Jacobs chasing 10 North Koreans away in a Jeep in the video game Mercenaries : playground of destruction for PS2. [while i had the cheats Infinite HP and Infinite Ammo turned on. and that was also the last copy of Mercenaries bought from my local Gamestop. Lucky me. XD!!!]

LOL!  Actually, that was the idea exactly.  I wanted to show the pauses in Kenzi’s delivery of that line.  If that’s how you “heard” it, then that lets me know that I hit the mark!

As for your facial expressions?  Wow.  That level of blushing might require medical attention.  Save some blood for your brain.  ^__^;;

the claws on the dragons feet seem a little too high up on the toes to me :T

dang it, i was kinda hoping the she would get away, but i guess tigers super hearing takes that out of the question 🙁

It also doesn’t help that she is running the wrong way.

One that was fun page to read haha! I’m sure they will go apeshit when they see a dragon {maybe haha}. Also why was I thinking about birds when the girls asked what that noise was is beyond me lol.

I have a few guesses on why you were thinking bout birds….. 2 of em revolving around this comic page. the other 65? Not getting into detail [Too long and rambly]

I find it odd that both the tigers and the dragons procured someone with a tied back afro at about the same point in the story…. but that was actually quite a while ago. I only thought to mention it just now.

I find it odd that both the tigers and the dragons procured someone with a tied back afro at about the same point in the story…. but that was actually quite a while ago. I only thought to mention it just now.