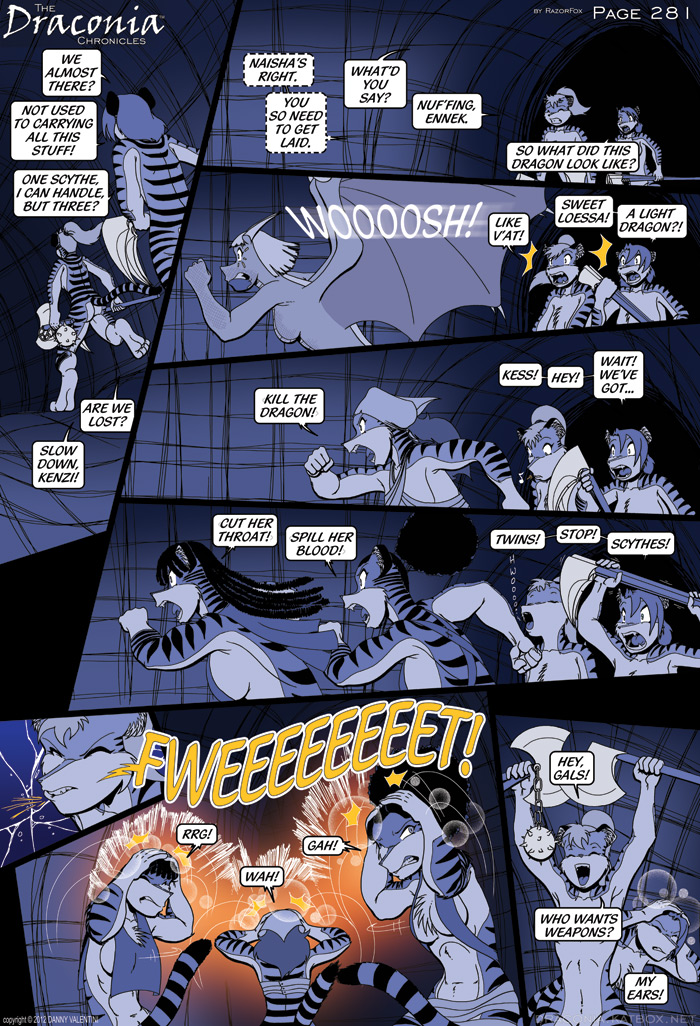 Looks like Kenzi‘s chipped tooth is good for something after all.  Not much more to say about this page, except that, after Briella‘s escape, the chase is back on!  Will Ennek and Kenzi’s offerings dash Briella’s hopes for getting out of the Calera alive?  Stay tuned…  ~__^

Those of you looking for a soundtrack for this page can pull up an old chase-scene favorite of mine, “Run” by Gnarls Barkley.

Last week, I formally announced my long-awaited return to Otakon after a 7-year absence.  I’ve paid for my Artist Alley table, made lodging and travel arrangements, booked the requisite days off work, so I’m good to go.  But I also want my return to Otakon to be a little bigger than just me showing up, sporting my trademark backwards black cap and my Playboy shirt.  I decided that I need to have some new offering.

The convention is in July, which is too early to start taking pre-orders for the 2013 Draconia Chronicles calendar.  So here’s the idea:  People have been asking for years about Draconia Chronicles trade paperbacks, with each one collecting a whole chapter of story material, plus bonus holiday pages from the era, and other extras.  The goal is to make its formal debut at Otakon, after which I would offer it for sale here on the site.  I’d like to gauge just what the interest level is in this, so please do me a favor and look over at the poll question and let me know whether this is something you’d go for.

And with that, it’s time to work on page 282.  Hope you all are enjoying the story thus far!  Take care, my fellow Draconiacs, and thanks for reading!

Downside: The tigers now have weapons in which to murderlate poor Briella. Upside: They seem temporarily stunned, giving Briella a chance to high-tail it out of there.

A piercing shriek of a whistle can do that. Maybe Kenzi’s got a new weapon up her… well, I would say sleeve, if she weren’t so darn nekkid. ^__^

The only thing worse for Briella than a group full of armed tigers is one that can unleash a crippling sonic attack. Fortunately for Briella, Kenzi’s new attack seems to have deleterious effects on tigers as well.

Arming the tigers seems to have slowed them down for the time being, but will she be able to outrun her own injuries as well?

Will she be able to find the exit before she gets hacked into tiny morsels and turned into tasty tiger treats?

All that and more, next week on “The Draconia Chronicles!” Be there!

Oh for the love of god hasn’t the poor girl been threw enough? These stupid cat’s don’t know when t leave well enough alone!
On the up side it looks like they have sensitive ears. A nice new weakness to exploit, if only the dragons can make a tiger whistle then this war is as good as won.

Well, Briella’s managed to evade the furry femmes’ fury thus far, sometimes just barely. Time to even the odds. The Tigers are through pussyfooting around. ^o^

That was just painfully thick on puns.

We have some standards to meet. Glad you approve! ^__^

Gotta love that whistle! I think Kess won’t be able to brag for a while, everone’s ears hurting and all! Priceless!

Glad you like it! I figured a bit of comedy would work after several serious pages. ^__^

Hey Razor? Can I help ennek with her “problem”? [And sweet. a censored naked tiger] As well as figure out the outcome of Briella’s inevitable doom of me pummeling her? [I wanna pummel her SO bad]

Only if I can beat the living C$#@ out of you for even suggesting that.. You will do NO such thing!

Why do you want to hurt him? For wanting to pummel Briella, or for wanting to help Ennek with her *ahem* “problem”? ^__^

Dunno about Briella’s thoughts on that, but for Ennek, you’ll have to get in line behind Naisha. Maybe she could use a tag team partner. ^__^

For some reason when I think about Briella, she reminds me of this song

Kenzi, breaking reality at a whistle away ^.^

I was struggling to come up with a way to show just how sharp her whistle was. I figured cracks, perhaps in glass, would illustrate it best. ^__^

Curses! My old enemy, the Strategically Placed Speech Bubbles, have returned to make the page relatively SFW! Eh, at least I get some nice side-on action from the Twins.

first thing that comes to mind with panel #3: http://www.youtube.com/watch?v=XtzoUu7w-YM

I agree enough is enough, we’ve already been put threw this enough times just let the poor dragon off the hook already and stop tormenting her and us.

But I’m not quite done yet. Gotta have a big finish. The scene needs a grand finale, or as they say in French, a “finale royale (with cheese).” Hang in there. ~__^

rofl A spoof on a Bugs vs Elmer bit from Warner Brothers!

Yes, indeed. The Wagnerian Opera featuring the Flight of the Valkyries… Classic…

Don’t forget that it always ended badly for old Elmer whenever he went hunting.

Ah, but if you remember, Elmer killed Bugs in that one cartoon.
“Well what did you expect in an Opera? A happy ending?”

You know Ive wondered about something. W eve already seen both dragons and tigers brutally killed. So what the hell is with the strategically placed bubbles? Some nudity can’t be that much worse.

Agen: My love for furries is so great, I’d GO that far.

Demented the way the ratings system works, isn’t it?

Actually, there’s two reasons for that:

1. Katbox’s rules (and my own) where a main-page comic shouldn’t show naughty bits. Bonus comics deeper in the site, sure, but main-page “landing” pages shouldn’t contain nudity.

2. Teasing you guys is a ton of fun! Plus, there’s an uncensored version of the last panel right here [link], if you’re interested. ~__^

So gore is fine but not nudity? What kind of logic is that!?

I hate the rules because there moronic.

And Cue the Yakkity Sax music! (Also known as the Benny Hill theme!) http://www.youtube.com/watch?v=ZnHmskwqCCQ Now who’s willing to bet that we’ll see a version of the Scooby-Dooby Doors in the next comic?

I already called that before Briella got captured.

“Good, use your time wisely. yor ekess klae letoclo ias lyriki. Seek defense among the shadows. Your scale color would not matter if you knew where to hide.” – Gavir V2 (See the V2 there? It is because Gavir underwent a gender change from losing a piece of his soul. And thus is now the only female drakmir alive. And is ALSO the Anno Drakmir (Leader.) so you’ll be seeing more of Gavir’s quotes, even with the Draconic language spread in it.)

This reminds me of a scene from the Hunger Games movie… It’s making me kind of sick just thinking about it. X.X

If only humor actually made the aware visceral wasting in instantaneous and simultaneous permanent raping and traipsing of sentience OK.

On a (somewhat) unrelated note. I’ve been in caves. On a tour of Mammoth Cave, as part of the tour, the guide turned off ALL the lights in one cavern. Total black. Briella aside (with her Light Dragon IR/UV vision abilities), even the best cat’s vision needs SOME light to see (same with low-light or light magnification systems–no light, nothing to work with). But that’s OK, ’cause I figure there’s some ambient light from phosphorescent fungus or exotic ores in the cave (aka. Laputa) providing some ambient light.

Yeah. Phosphorescent fungus and exotic ores. That’s the ticket. Thanks for the info.

On a slightly unrelated note of my own, I’ve actually come to like the way the Tigers look in blue. Maybe they’ll eventually see daylight again. ~__^

Which scene? The one with the mockingjays?

The scene after the artificial firestorm where the killers find her wading away in deep water and then tree her whilst in pursuit, laughing and screaming “kill her”.

nice to see that and hoping for more on next Monday 😛

P.S. is not her toth breaking by making that sound? and i didn’t see the small pic becaus i laugh my self of the chair 😀

Yup. It’s all about Kenzi’s new ability to whistle like a badass. ^__^

why am i thinking of the escape theme from metroid when reading this?

ridly looks like a dragon right? meh, lets try it.
*listens to ridly’s theme while reading page*
meh…not the same without platforming…

It happens. You can try the same thing and scream at the top of your lungs, and it’ll have less of an effect on you than on those around you.

Hmmm…Memo to self, must try this to troll friends in future :3

I just realized that there is a parody of Lord of The Flies in this. Nice one.

She still smells like crap. So it’s not as if she can just use that power to hide out of the blue. Best opportunity that I can think of for her using that ability again is if the tigers are able to see her and she comes to a fork in the road. Maybe she just goes invisible while she picks a direction or maybe she sends her decoy one direction while she goes another direction. Though her last decoy was really more of a still version of herself, so I’m not certain if she has the ability to make her decoy move. But going invisible at a junction would certainly help throw them off.

Concentrating on magic is hard when you’re in pain from a major beating.

“Naisha’s right. you do need to get laid” what my friends say to me everyday i have no idea what it means tho =p

yes unfortunately =c mind you we do sorta talk now and then..okay maybe not so much… OKAY fine we don’t talk at all >.>

Does that mean Kess doesn’t get one?

Does it also go on to say to “get funky”?

Perfectly timed distraction. While you three are choosing weapons, Briella should be widening that gap.

Don’t need to tell her twice.

Hm…this does beg the question as to how she became such a great whistler. Leaving that one up for interpretation folks.

It’s a special ability that comes from landing face-first on a rock floor and busting a tooth. She just puts her lips together and… Oh, wait, I see where you’re going with this. ^__^

Lord of the files ref?