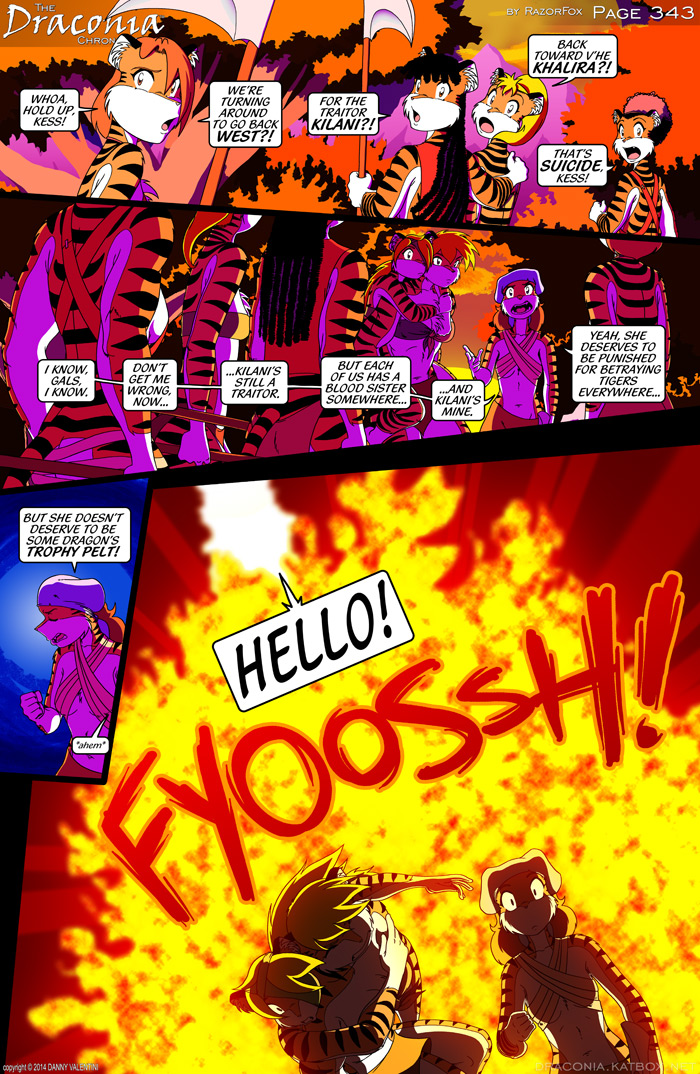 To borrow a line from a classic thriller, “they’re heeeee-ere.”  Have Kess and her motley crew met their match?  Find out when Chapter Six begins!

Those of you looking for a soundtrack to this page can pull up “Gimme Shelter” by The Rolling Stones.

That’s right, this is the end of Chapter Five, a chapter that ran substantially longer than I’d planned, but I feel the time was well-spent.  I’m looking to make Chapter Six a bit shorter, but who knows what might happen when seven armed Tiger warriors go up against six Dragons on a mission.  Someone’s gonna get hurt.

Be on the lookout for the start of Chapter Six real soon, and be sure to stay on top of updates via my Twitter feed, the Katbox Twitter feed, and the Draconia Chronicles Facebook page.

Hmm This is going to be painful to watch because i cant choose which side i would cheer for XD. It was inevitable of them being spotted. Though if Kilani come into battle, it might be her opportunity for redemption.

Redemption is a powerful motivator. Several characters are aiming for that right now. In the meantime, let there be crazy violence! ^o^

As we say in the business….
*puts on sunglasses*

It’s about to go down.

Get ready to rumble.

I’m sure it gave them a warm feeling!

sorry about that, I was watching pawn stars and thought id haggle with you a bit

I see. Good show though.

She really knows how to make a ”warm” greeting.

You can almost smell the love, which smells an awful lot like singed fur.

Hot tigress anyone? Comes complete with singed and smoldering do-rag!

Is intoxicating, is not it?

Wake up call, both literally and figuratively.

Now that song’s stuck in my head. T-T

The one by Maroon 5?

Yup. Liked it at first, but uuugh…

Odd that Ennek would question going back west, considering she was very much against leaving Kilani alone 27 pages ago on 316, roughly a few hours ago in story-time.

A good observation, though I should point out that Ennek never mentions reservations about going back for Kilani, but just the act of backtracking. Rula, Kenzi, and Naisha bring up Kilani. Perhaps after they’d gone so far east, Ennek might simply be concerned that this long walk was all for naught.

So, it’s not the fact that Kilani is back the other way, as much as she’s tired of walking and doesn’t want to go back, in general. Understood, and probably a bit of anger at Kess for leading them all the way for naught, as you say.

…is it bad that I heard the words, “They’re heeeee-ere,” in the voices of the Ginyu Force from Dragonball Z Abridged?

Not in the slightest, though I was aiming for the movie “Poltergeist.” Whatever comes to your mind’s ear, though, probably achieves the exact same sentiment. ^__^

Well at least she said hello… before she almost roasted them alive, I’m excepting a butchered attempt at communication for our next next chapter, should be fun.

If I would guess, that would have to be Cinder, since there are no language brackets and she’s been the one practicing the Tiger language XD ‘Course it could be just Cinder speaking and Kighan could be doing the pyrotechnics.

Either way, time for the shit to hit the fan! owo/

Great observation! Given each character’s current strengths, you might be right. ^__^

anyone else think that the fire makes Kess’s tits look even better?

Glad you noticed. People focus so much on Kess’ attitude that they often overlook her other “assets.” ~__^

“Hello”… Welcome to the shit storm or is it flaming shit storm I forget? lol

Burning or not, it still stinks.

And made their presence felt.

What I worry about is the placement in the first panel. We have the three up front, Kess and the two non-twin sisters with the rest behind them…

…That behind them is turned into a Fire Ball.

Well, if you take another look, Kess is facing Ennek, Kenzi, and the twins. That means that behind Kess is just open space, though it has now been occupied by some Dragons trying to get her attention.

some one just lost there train of thought i think.

My guess is Kilani will give herself in to the dragons to avoid bloodshed. If so i will be happy and sad at the same time. Sad because we will lose a great tiger and happy because Kess will drown in her own tears after realize, too late, of how much Kilani means to her.

I love the new banner and the fact that my two favorite tigers are on it! :3
The sphere has me intrigued, is it important? THE OBSIDIAN EGG???

I love the new banner, and how my two of my three favorite tigers are on it! That sphere intrigues me. THE OBSIDIAN EGG??? And you even put up a web icon!