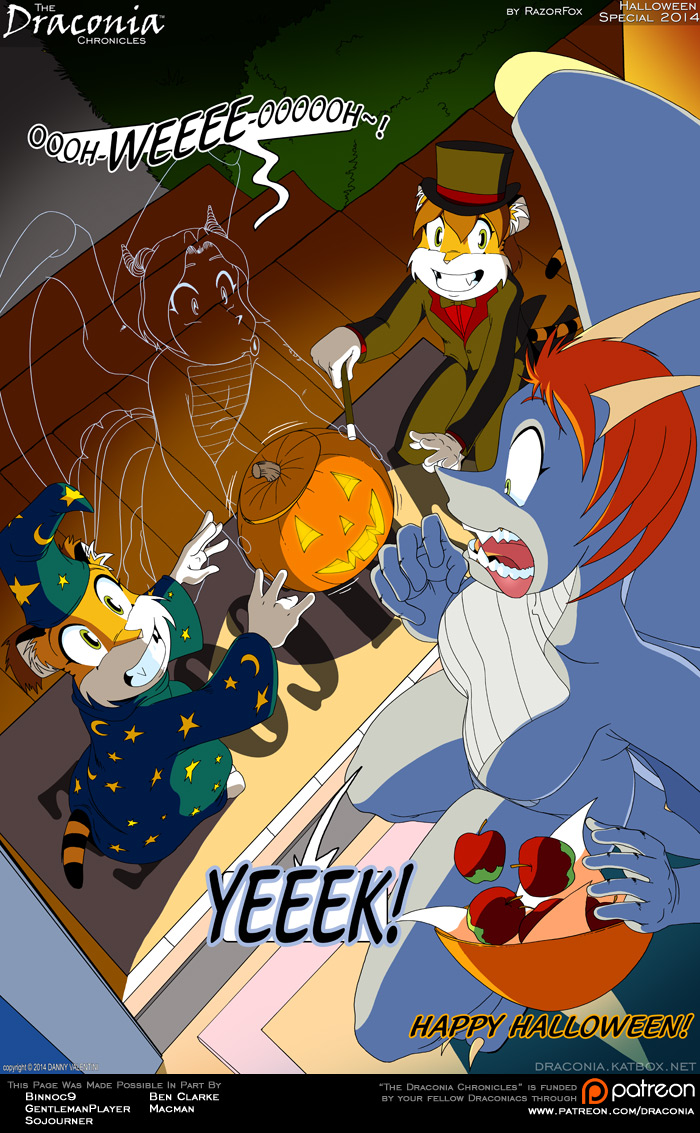 Much to Blue‘s horror, it looks like Cree and Tyree have learned how to do some “magic” of their own.  Has every Dragon’s nightmare come true?  Or is Princess Lumina just part of a trio of merry pranksters?  ^__^

That is the cutest thing. Lumina being besties with Cree and Tyree just makes me fall to pieces x33 Nothin’ like some trick to go with your treat! >:3

Happy Halloween to you, too ^w^

They’re a really fun trio to work with! It’s why I always look forward to the holiday special each December, and so should you! ^__^

I do! Let’s hope Mable doesn’t get involved in their shenanigans this time 😀

hey razorfox. i absolutely love the pic. both funny and cool at the same time. great job.

but razorfox, theirs something i would like to bring to your attention. something important.

you know chalo, right? the guy who writes and makes las lindas? i believe you know him. and well……after seeing the draconia chronicles wiki i was impressed with what i found and began searching around wondering if any other people have made fan sites for the katbox. i first searched las lindas……..and what i found was not good.

i don’t know why exactly. but many people are just hating on las lindas and on chalo. they’re saying that the comic is crap, and that its not good. which i highly call a bunch of B.S.

like this one jerk on youtube calling himself the ”webcomic relief” (a bullshit name if you ask me) and in his videos, he describes why the comic is bad. and although he does make some points about the comic, the problem is that he takes the comic too seriously, and treats it as if it was suppose to be the greatest webcomic ever. in short, he’s an ass.

but what i came here to tell you about. is that if he saw las lindas, he will most likely see the rest of the katbox comics. and let me just tell you, if this jackass gives your comic a bad review, don’t listen too him. although he won’t admit it, he’s just a hater. even if he is right on some points on las lindas, the only reason he’s giving this review is to convince people to dislike your comic. otherwise he wouldn’t be uploading such hateful videos. what he doesn’t realize is that people love las lindas despite everything he pointed out. because in the end, its all just a difference of opinion. although he fails to accept this. its the honest truth.

anyway i just came to let you know about this guy, and no matter what he may say about your comic or any other comic of the katbox. just don’t let him get to you. he’s just a hater. period.

again, great job on the pic. looking forward to your next update.

Aww i need my camera, brb.

Careful, Lumina won’t show up in the photo!

once again I love the alternate reality “every things nice and peachy” narrative world that you bring up during holidays and such, it’s a great change of pace from the constant war and misunderstanding of the man plot.

It’s always fun to check on the alternate Draconiaverse, known on the inside now as “Draconia Lane.” ^__^

Rofl I would totally do that if I could!

Thanks, and yeah, invisible but tangible friends can come in real handy! ^__^

What scares her more? The floating jack-o-lantern or the thought of the tigers also having magic?

The original intent was just the former, but once people started pointing it out, the latter totally makes sense!

damn I never thought of that

What, using your invisible but tangible friend to create the illusion of levitation of inanimate objects? ‘Cuz I’d totally screw with people that way! ^o^

my friend who can become invisible died in WWI

that’s what you get for giving apples instead of candy

But they’re good for you, and a great palette cleanser! ^__^

your supposed to give unhealthy snacks on Halloween

And they say that tigers can’t use any magic, well, there you go… The magic of friendship 🙂

Nothing says you can’t! A lot of new parents will dress up their infants (and themselves) and canvas the neighborhood. You might still have time!

This. THIS is the best Halloween webcomic special I’ve seen this year…and I’ve seen quite a few!
Here’s hoping that someday in the future, tiger cubs and dragon…dragonlings?…will play and trick-or-treat together as friends and neighbors. *fingers crossed*