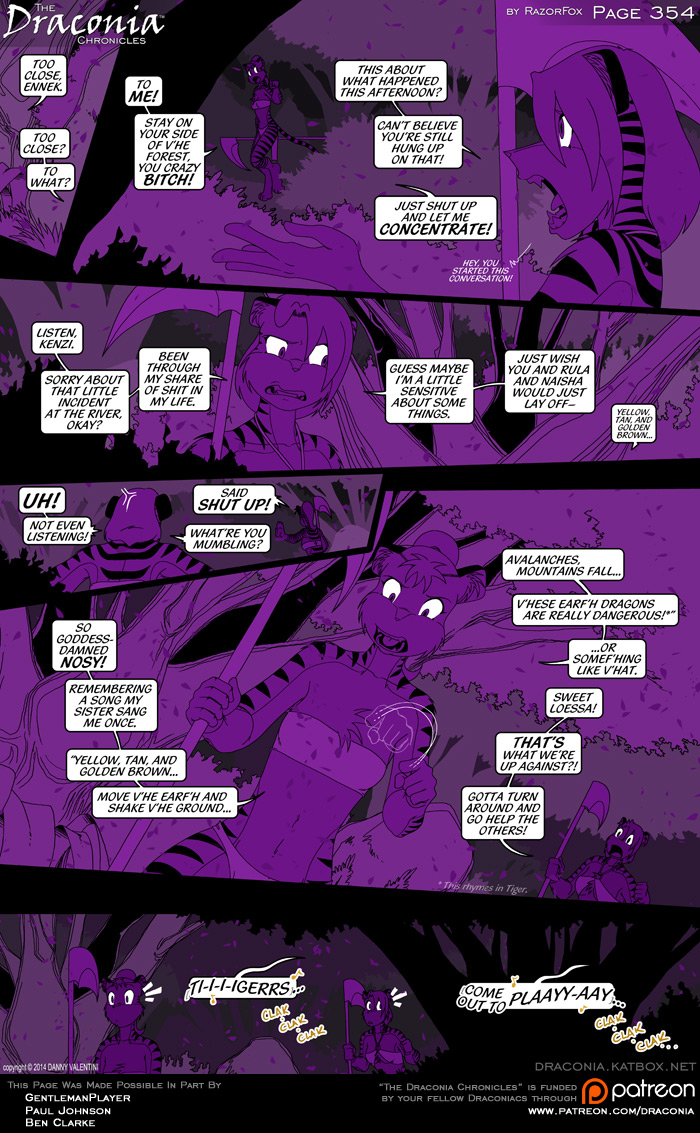 So now we know what Kenzi was musing about back on page 344.  Will it give her and Ennek an edge in what sounds like a brewing fight?

Those of you looking for a soundtrack for this page can pull up “Get Ready” by Rare Earth.

Last time, I mentioned that I’m going to be making my final Artist Appearance at Anime Weekend Atlanta this September.  You might also already know that fellow Katboxer MasterGodai, mastermind behind the Rascals universe, will be joining me.  Well, let’s sweeten the deal and add one more name to that list, as Caribbean Blue creator Nekonny will also be joining us, making for a triple threat of awesomeness in Atlanta!  My farewell appearance in Atlanta along with Godai and Nekonny?  If you’re anywhere within the southeastern United States, your excuses are shrinking in number.  We hope to see you out there next month!

By the way, thanks again to all who’ve pledged their support for the comic on Patreon!  By pledging as little as $3 per page, you’ll have access to new page previews, and you’ll see completed pages as much as a day before they’re released to the general public.  Help keep The Draconia Chronicles going and pledge your support today!

Until then, it’s back to work on the next comic page.  Just who exactly is beckoning our unlikely team of Tigers?  Stay tuned…

Fox, there’s something that’s been bothering me for some time now. Remember in your Tumblr when you post a adult version of little Lumina. What is soo special about that little dragon? Is not because that she’s a princess, there’s something else right?

Very good question! I’ll be sure to address that in-comic at some point in the not-too-far-off future, but for now, let’s just say that she has a high emotional value to both Queen Oscura and Kilani, and a high strategic value for the Dragons.

please make it soon, its driving me crazier

hey razorfox. i just noticed something with your schedual. ya see, over the past few months, your schedual went like this . you post an update one week, and then you skip a week, and you upload a page again. which was good, it was nice that you had everything planned out and such.

but now i just realized. that this page was uploaded way earlier than usual. i guess things must be taking a turn for the better for your life. but anyway i just wanted to point that out. great job with the comic. keep it up.

Thanks! A big change has, in fact, happened this past week, in that my day job’s schedule has changed. Instead of working evenings, I now work a more traditional daytime schedule. It makes my “day” job live up to its name. I’m usually more artistically productive in the evenings, so I may be able to work more comic updates out of that. On top of that, some pages are just more complex than others, and that affects their production time. This page here really consisted of relatively simple shots of Ennek and Kenzi walking and talking, whereas the previous pages with the Dragons were more involved due to the additional characters.

oh believe me razorfox. i understand you completely. i mean drawing the tigers on page 347, from that angle. it must’ve been a bitch. but still, its good to see that your life is getting better and that you have more free time to do as you wish. its good to see both you and the comic itself getting better. keep it up.

Yay, someone caught it! ^o^

I knew it the moment I read it! XD WAWEEAAHHHHSSSS! lol

My dad told me about that movie, I saw it on YouTube. It was amazing

I thought I mentioned this before (or maybe it was in another webcomic). Small details may not be commented on, but they are noticed and appreciated.

The only thing bothering me about it is the punk in the movie was mousy. I wouldn’t exactly call any of the dragons mousy.

At least, not without having a good head start.

I never even saw the movie and I caught the reference. XD Mostly because that part was on a list of top 100 best ad-libed moments in movie history. Yeah, that part wasn’t scripted. And it was awesome.

where did she find bottles… or is that the sound of her claws clashing together?

AWWW! you switched to the tigers side? right when the dragons side was getting good? aw razorfox, now your just being cruel. lol. but none the less, one can only tell what will happen to saph when she gets close to them. i bet ennek and kenzi are freaked about how’s shes taunting them. assuming they can understand her.

wait, what warriors are we talking about again???

OHGOD IT’S SAPH! XDD I burst out laughing at the last panel, oh man! I hope this will turn out peacefully, but it’s more likely gonna be panic on the tigers’ end and Saph is most likely gonna get hurt. If not, I will be surprised if she comes out unscathed. Girl’s got potential, but thanks to Kanti’s song Kenzi and Ennek will not be taking any chances. Eee, can’t wait for the next page! x3

Well, hopefully we’ll find out soon just who’s out there, wanting to play with our striped heroines, and how they fare. Glad you got a laugh out of the last panel! I’d been waiting for quite some time to use that gag. I’d originally intended to use it on page 337, and we almost got away with it until Meta interrupted. ^__^;

I got a question, if the tigers are hanging around for a while and have a superb hearing, do they have a good nose too? If so, they could have smelled (if its a tiger) the one in the shadow. Maybe it has already been answered. Cant remember.

Great question. The Tigers do have an excellent sense of smell. Back on page 350, however, Naisha mentions that all the trees in bloom are interfering with their olfactory sense.

Oh right, i re-read the page you mention and yea that make sense now. Sorry.

:O maybe…it’s time for the foxes to come and play it’s been a while since we last saw the foxes….err…..Fox I should say….maybe she will show here self…and friends?

You never know where Shaleigh might be lurking, and what shenanigans she might be trying to pull…

They might need to get ready for some rumblin’.

The tigers are innocent! Innocent I tells ya!

They aren’t licked yet. There may be just one Dragon out there. Those might be good odds.

Yes, but starting a fight with ONE Dragon will bring the others. Seriously, one of these Tigers needs to learn a Fus Ro Da or something!

Does this mean I have to work in an “arrow to the knee” gag somewhere in here?

Not obligated but it would be hilarious, I kinda stopped reading this comic after that POW was slaughtered by the tigers way back in the beginning, but now that I look at it, it seems to have taken a somewhat silly turn, I like this :3

Thanks so much for the kind words, and we’re glad to have you back! While I still consider the comic to be an action-drama, I like a good laugh just as much as you do, and so I’ve given the comic a little bit more whimsy than before. It wasn’t entirely intentional, but since it fits, I’m sticking with it. ^__^

You’re welcome, I just don’t like it when a series focuses solely on the drama and depressing death stuff, I prefer a fun, funny series or better yet, a series that combines both extremely well, like Better Days by Jay Naylor

Oh, and that warriors reference was fucking awesome

Well THAT’S creepy… And I love the reference.

Poor, poor Saph. You became my second-favorite Earth Dragon after Gaia died. Must you meet such an early death too? ;_;

Oh, relax. No one’s died… yet. Nor will they… necessarily.

Yellow, tan, and golden brown…
move the earth, shake the ground…
avalanches, mountains fall…
these earth dragons can kill all.

is that the real thing? or are you just guessing?

Supposition, you should note that control of the basic elements (air, fire, water, earth, and life) is a common theme in fantasy fiction.
I read a story a couple decades ago about mages who controlled the basic elements. Beings animated by the first four were called elementals. With slight modifications, this is the chant used to animate the earth elemental.

Oh, I believe you. I am not saying you took it from any other story.

Now-a-days, it would be extremely difficult to create any sort of fantasy comic without finding another that is simular. I have to admit, finding a story like this one would be very difficult, tough.

Both Cat-people and Dragon-folk are mainstays of fantasy fiction and I am certain (if you search long enough) you will find another story that has them as enemies or even allies.

Most other stories have both male and females involved in the plot line, though. Having only the females involved is a very rare take on things. In fact, I doubt there’s many stories that COMPLETELY disregard male action like this comic does.

You have done a wonderful job with this comic. One thing I especially like is you have not decided to show homosexuality or lesbianism in your comic (and with this story-line, it would have been easy to show).

In fact, you even showed a strong need for ‘straight’ aspects with the desire for reproduction. Heck, the dragon queen CONTROLS her subjects with the need and even killed a loyal subject when she ‘bucked the system’.

oh ill give you an example, one word: skyrim! lol!

but i agree with you completely. in my opinion: draconia chronicles is the best comic out of the entire katbox. because it has a never ending plot line, each and every single page ends on a cliff hanger, bringing more and more suspense to the comic with each an every upload. i only wish it got more famous. razorfox’s work goes under appreciated.

If you want controversy, THAT statement won’t do it. His work and this comic definitely deserve more fame than they’re getting.

well frankly, if i could, i would upload a video explaining in great detail how great his comic is and how the katbox itself has good comics. but i can’t do that for two reasons: 1. i don’t know how to upload a vid. 2. im worried that furry haters will bash my vid.