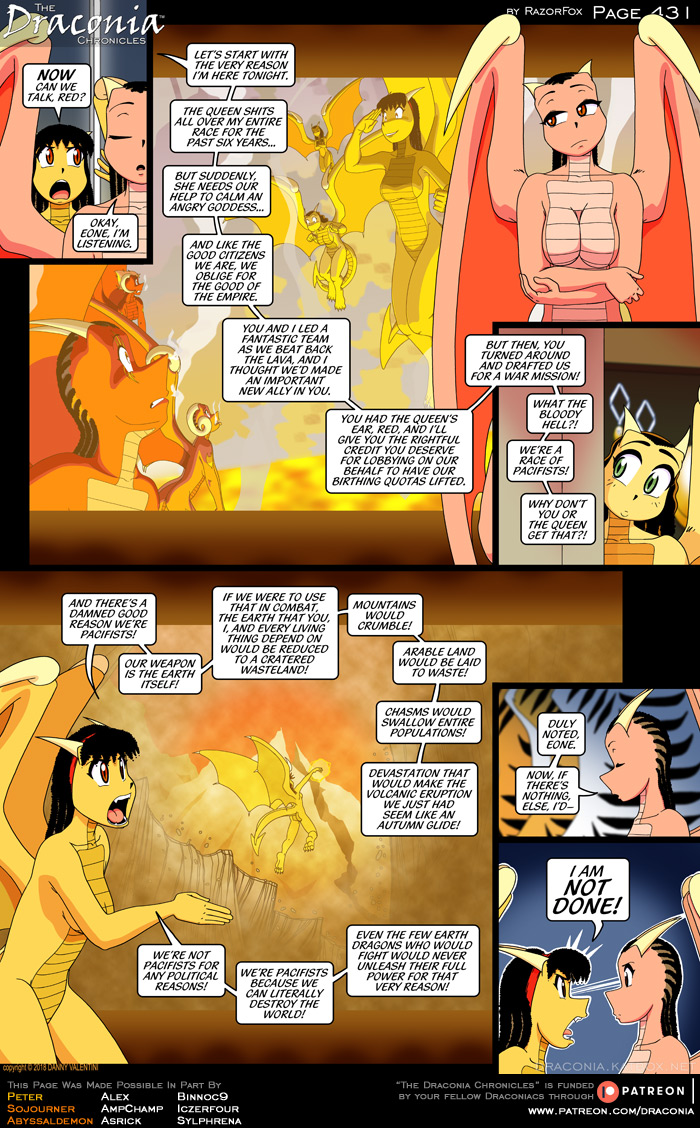 So Lady Red‘s home, and it looks like she and Eone are finally having that long-awaited talk. Will they achieve a mutual understanding? Stay tuned…

Take care, my fellow Draconiacs, and thanks for your continued support on Patreon!

I find it interesting, from what they’re saying, the earth dragons could genocide the tigers easily, and yet they don’t because they fear their own power?

Well, to hear Eone describe it, the Dragons would be taken along with it.

makes sense. summon a volcano, and that magma doesnt just go away, create a huge earthquake, and you are setting yourself up for a chain reaction of further quakes along the fault. and those two things can cause each other to happen.

When you think about it, and even this page confirms it, Earth dragons are pretty much the most powerful magic users in this world since they can literally control the Earth around them and bend it to their will. It really begs the question on why are the classified as lower citizens when they can literally bring a disaster to them even more worse than what a volcano can do?!

Maybe a certain Dragon’s extracurricular activities had an impact.

Nearly eradicating an entire race (seeing as they were restricted in reproducing until recently) based on a single individual’s actions really proves what a tyrant Oscura is.

Sign….
You know. I was half paying attention to this whole dialog because I kinda lost interest on the whole Earth Dragons stuff and Red’s bullshit wanting this day to be over with. But then old RazorFox had to go and make story interesting again by having Eone talking about why Earth Dragons are pacifists and going all up into Red’s grill going all “bitch I don’t care about your damn entitlement. Sit your $5 dollar ass down I’m not done yet.” Thank you so much Mr. RazorFox for to being my alarm clock for this comic. I really needed that.

Woohoo! Glad I was able to perk you back up! Not every story can be comprised of non-stop action or else the audience gets exhausted. There need to be some opportunities to breathe, and I use those opportunities to set things up for future payoffs. Will things kick into high gear soon? Stay tuned… ~__^

Eone does raise great points. Her people really don’t want to be involved in the war, for the good of both sides. The volcano crisis was caused when Luasa was angered by reasons unknown at this point. Shows what her people are capable of. Yet despite this, Red is unfazed and dismissive of their representative. Now, I’m curious on two points. The first is Saph’s opinion, and if her view of Red has changed. The second is if the borderlands were broken as they were by earth dragon intervention at some point in history.

Intriguing questions! We know Saph is overhearing all this, so who knows how she’s taking all this…

Funny how that works out sometimes, isn’t it?

Well, maybe this is reason why outside of tiger and dragon lands are wasteland. Since at some point is hinted about the past of earth dragons that they are not be pacifists before, hm, realisation maybe. And I glad that some dragons fully understand how destructive for nature can be their powers, that shows us that among dragons more mature persons than we thought. I’m glad that finally Eone can fully proves her points and words.

Also it’s seems Red be afraid of something 😛

Lady Red has a right to be concerned. Who in their right mind likes having someone come over to their home just to be yelled at by them? ^__^

If this doesn’t make it clear to Red or the queen they are about to make a huge mistake on pushing Earth Dragons. I would love to offer a sledge hammer to crack their thick skulls.

okay from what I am seeing in this page . . .the Earth Dragons are basically Haxx right?

…Oscura wants that power. Red isn’t devious enough or even…aware enough to do anything without Oscura’s pushing. She’s a yes-man. Something makes me think that Oscura is deliberately setting up the Earth Goddess’s displeasure and the removal of Meta as a force of power for the Earth Dragons to justify conscripting the Earth Dragons. Such power would put the terror into ANY would-be tyrant, and Oscura would stand to gain much trying to make a play for both crushing and subsuming direct control of Earth Dragons…

Which makes me think Eone just signed her own death warrant.

I kinda have a question about the dragon race that I cant seem to find. Who lay the eggs? The dragon mom or queen Oscura (Like a queen bee, that lays all the eggs) Or the queen has te power over the male dragon so she decides who he sleeps with?

Interesting idea, though Her Majesty Queen Oscura is not a queen bee. Each Dragon can lay her own eggs, but the Palace has a say as to when the egg gets to be fertilized.

Now I’m interested in seeing rogue or rebel Earth (or other) Dragon factions showing up and going against the Empire, have a showcase what happens if Earth Dragons get bloodthirsty.

Now I’m curious if there’s going to be an Earth Dragon rebel faction, or any sort of rebellion that ends up tearing the whole land around the Empire up, if things are this bad for the Earth Dragons and the views with the tyrant queen are this bad.
Still wondering why there hasn’t been any mention of rebels on either side, in fact. There has to have been some dissention with a long war like this.

The ulterior motive for the Earth Dragon prejudice comes to light. The entire Race is nothing but walking Weapons of Mass Destruction. One errant Dragon could bring about catastrophe, and im guessing there are at least a couple hundred even with the breeding restriction. And im sure the Queen knows this. You dont want to let a potential threat to your existence run free, you attempt to control it through any means. The prejudice was born from fear.

You know I really don’t think Red gets enough credit. I see allot of commenters rag on her constantly. But to her credit, Red does her best to try and takt the high road and remaine calm, and fair. If it were any other dragon in that situation with the light dragon that tried to kill her, and Eon and her hissyfits. Both there heads would be on pikes long ago,

O.K. A few there are a few problems with Eon’s rant here….
To start off, lets get things straight. While the earth dragons did help with the volcano problem, it was by no means done because they were doing there “Civic duty.” They made demands of the Queen, and on the promise that those demands be carried out they helped. Now I’m not saying that they didn’t deserve to have more rights granted to them, they defiantly did. What I am saying is that you don’t get any moral high ground and act like a saint when you do something because you course the other side.

Now speaking of those promises. They were indeed carried out after the help was given. HOWEVER, one such demand that Eon herself made was that the Earth dragons be able to join the military. Not really the thing a “Race of Pacifists,” should be apart of. Keep in mind that was one of Eon’s own demands for the queen in return for there help. Now Eon may have said that this was just a demand by a small group of earth dragons. Still Considering that Eon completely shot down Saph for wanting to do anything more than the bare bones minimum to help Red for “the sake of there autonomy,” makes me wonder why Eon even made that demand for the Queen in the first place, why would a “Race of pacifists,” that are “pacifists for good reasons,” want to be connected to the military in any way? So why made the demand in the first place? This makes Eon shooting down Saph less about Autonomy, or Pacifism, and more about Eon’s own grudge with Red because Red outsmarted her and Dragged her lazy tail to help her. Which Red wouldn’t have had to do if Eon had just sent the Earth dragons that wanted to join the military in the first place, or give red a list of these earth dragons when Red came asking politely. Would that have left the Earth dragons short staffed by three bodies? Yes, but it would have avoided allot of aggravation for Eon in the end. But Eon never did, so Red had to conscript the Earth dragons she knew about and could do the job, in other words Eon, Saph, and Meta. So that was all Eon’s fault to begin with.
And lets talk about how the dragons were used. While Eon makes some good points as to why Earth dragons shouldn’t be used for war. They were never going to be used that way anyway since Red had them put in purely defensive roles. Never in that entire trip did Red ask them to drop a mountain on the tigers. Besides some tracking, and instant walls and that was it. So Eon’s Argument about that doesn’t hold water sense they were never suppose to be put in a situation were they’d break the earth itself anyway. As for Meta, she put herself in this bad situation when she basically threated to make/have the Earth dragon goddess make another volcanic eruption. Which is the Hight of stupidity, since the earth dragons managed to get there collective heads off the chopping block when Oscura thought they were responsible when it last happened, so why would you give them a reason to think Meta as a priestess would have the same thing happen again just to stupidly puff up you’re chest and act all macho?!
Eon is a rotten brat, and Meta is just as stupid. There’s no point to whine and bitch to the one dragon that tried to help you, because congratulations! You’ve effectively screwed yourselves!