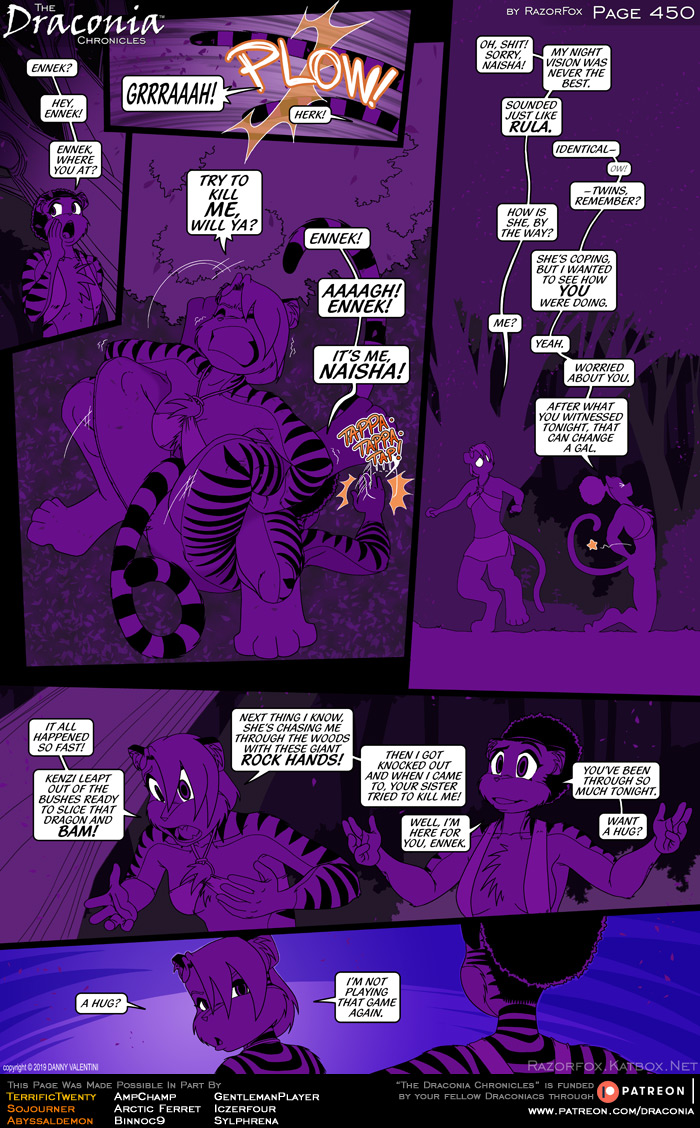 Don’t sneak up on the queen of submission holds!  Does Ennek have words for Naisha?  Stay tuned…

By the way, you can see an uncensored version of this page when you support The Draconia Chronicles on Patreon!  And you can also get Draconia Chronicles update announcements on Facebook, Twitter (new account!), DeviantArt, FurAffinity, and Instagram.  Follow any one of those and you’ll always know when an update goes live!

why not the game is so much fun

You could say Ennek already gave Naisha a “hug.”

Well, there was that one time Rula and Naisha simultaneously hugged Ennek, but…

Lord Ennek: “I don’t know how this War started, but what your kind did to mine. I can never forgive you. But, you have my thanks, for standing by Kilani to the end. Hard to believe she’s dead…”

Arbiter Cinder: “Were it so easy.”

I’m sorry but that reference is too good.

Poor Ennek, she has had it! Teased, smacked, ignored, Kenzi died in front of her, Saph relentlessly chased her, she gets knocked out, Rula blames her for Kenzi’s death and tries to kill her, etc. No wonder she doesn’t trust Naisha just now xD;; She’s amazing for not being more out of sorts.

Fun fact: Ennek wasn’t meant to be a primary character, but when she first appeared, she got such a strong reaction from fans like you that I began writing her into a more prominent role. ^__^

Thank you so much for that. Ennek is easily one of my favorite tigers. Tshila should be proud to be her sister! Cree and Tyree have the greatest Aunt, cuz this gal’s got stories to tell!

I honestly can hear the back craking sound very easily.