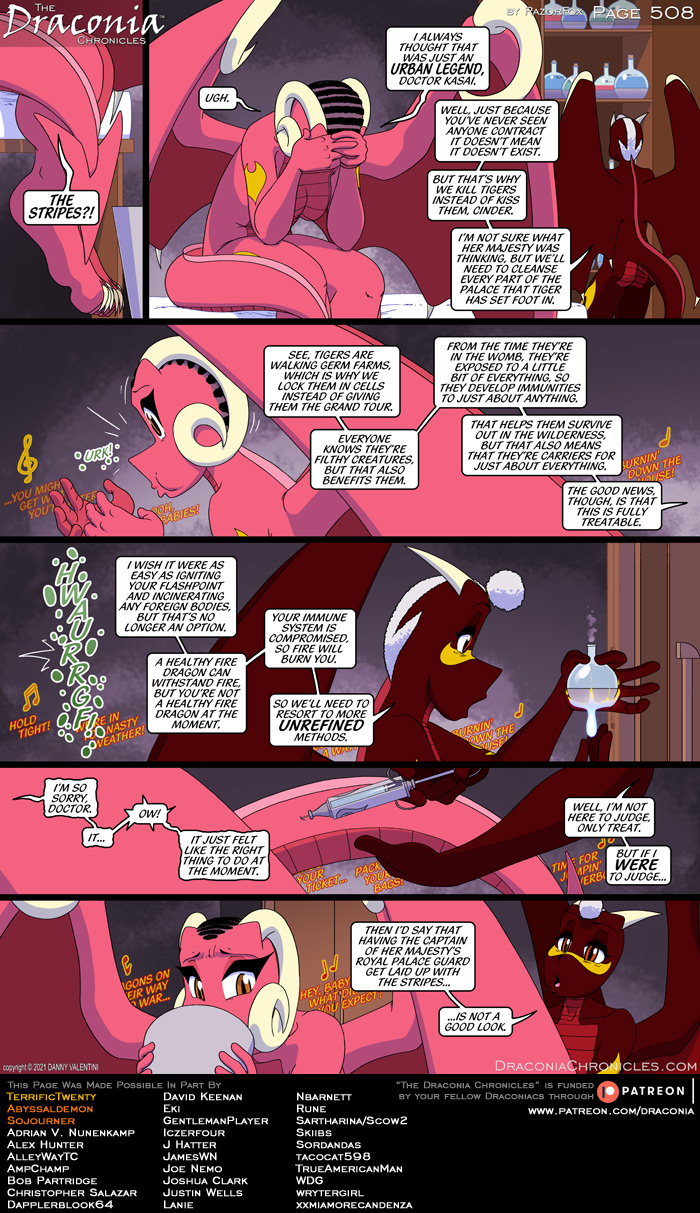 Is Cinder getting a shot of reality from Doctor Kasai?

Remember that supporters who pledge $10 or more per page not only get their name on the pages they help make possible, but they also get to check out deliciously deviant bonus art and uncensored versions of new pages! You can also support the comic at other levels to check out new content before it goes public and to see new pages as they get drawn and rendered. Your support helps keeps the site working and it keeps The Draconia Chronicles going strong, so pledge your support today!

I honestly wonder how much the doc is saying is physical fact, and how much is prejudice. This implies the dragons have sucky immune systems… Then again… the princess spent all that time with a dragon and didn’t get herself… implying this might be baloney.

I mean spent all that time being raised by a tiger! Typo.

Well, if Her Royal Highness Princess Lumina grew up in the same environment as a Tiger, she might have picked up some of those immunities, wouldn’t you think?

In other words, the dragons just live in way too sterilized an environment.

The price of civilization!

This makes a lot of sense, honestly. There’s many stories of colonised countries being exposed to new viruses and bacteria that they didn’t have natural defenses to, though Kasai’s wording is a bit worrying, I would take that as reason to stay away from them, rather than fight them, though they’re in the middle of a war, so I can also understand her perspective. Poor Cinder though, nothing worse than being smacked with an illness out of nowhere.

Especially when someone’s counting on you!

“The Stripes” illness seems to be dragon slang for an std, rather than any contact or airborne virus. Not airborne, or the prison would be a virus incubator, making the dragon prisoners real sick. Not contact either, or the lightning dragons coming back from the chapter one skirmish would have it. Unless they weren’t around the tigers long enough, or lightning dragon immunity is different.
Also, Lumina. She was hatched with Kilani, when she had no immunity. So, if it is contact, good chance she’s already had it and now immune, and is a carrier. Which raises the question, if she carries the virus, how have her attendants and Oscura avoided it? Since Oscura has been around Shaleigh, who sleeps with Kiriad, and at one time captured Kiriad for a period of time.

Well, Doctor Kasai did mention that “The Stripes” is spread via intimate contact. I should hope that Kilani didn’t have that kind of contact with Her Royal Highness Princess Lumina. Let’s hope that Kilani’s not THAT kind of monster.

We can hope. Not sure tiger society is “that” open. More meant if it was solely a contact virus, not requiring intimate contact.
They really shouldn’t be frantically cleaning if it’s solely an intimate virus, since they usually can’t survive outside a body.

More drama, but the fact that those two are still singing just slays me.

Yay, someone noticed! Their last ditty, a take on “Play That Funky Music,” was just one of several songs I wanted to have them sing. For this page, it came down to “Burning Down the House” and “Disco Inferno,” all of which appear to be Fire Dragon standards! ^__^

So we now have word from Dr. Kasai. And it is not good.

Cinder is holding her head in disbelief and shame. By her admittance, The Stripes was merely believed to be a myth, some story to scare any dragon willing to take things by ear. She should know by now that even old legends and fairytales do have a grain of truth.

Regardless, Kasai’s words paint tigers not as enemies but as carriers of dangerous contagions that can compromise a dragon’s health and leave them vulnerable to injury by their own element. Cinder’s kindness has backfired in the worst way. The good news Is that the illness is treatable and non-life-threatening.

However, to point something out, the Dragons have medical knowledge and expertise on their side and have used it well. So why not use that to immunize the populace and make the illness impotent? This would benefit both in the long term. So what is stopping them?

Is this a sign of xenophobia? Where fears, no matter how illegitimate they may be, are hampering them from taking this kind of step forward? If so, then the Dragons may have taken a step down the long road towards disaster.

But one thing troubles me…

Kasai says that The Stripes is why Tigers are treated the way they are. Thrown into cages, pushed away, or even outright killed. This is not good on any terms.
Could it be the smoking gun behind the war between the two sides? Or, like in our own history, is it just one of the webs that entangle the two civilizations in their struggle?

Good point about possibly immunizing the populace, though wouldn’t that create the impression that having intimate relations with Tigers is okay?

Yes, it would. But it would probably give the Dragons one less thing to worry about. Or it could bolster their egos and make the fighting even worse.

I think the Dragon’s civilization is inflating their egos somewhat. Let’s hope they don’t pop.

You are right though immunizing the populace against The Stripes could have a negative result as well as a positive one.

From that monologue it’s obvious the Doc is a part of the “Old Guard” when it comes to the viewpoint of Tigers. She talks like they’re not even Sentient.

It helps to think of an enemy that way.

What strikes me though – a few pages ago the doctor noted that the symptoms themselves are not rare, just the speed of their onset. So does “The Stripes” really *require* intimate contact (like a STD) or is the name more broadly applied to ANY sort of “staying too close to tigers for too long”? There’s no doubt Cinder got a concentrated dose of whatever Kilani has in her system, but that doesnt make it exclusively an STD – just the difference between getting sick overnight and a day later. I suspect a mixture of xenophobia and vilification is making Dragon medicine treat the situation a bit dismissively…

Now with that said, if Princess Lumina /lived/ with Kilani for a while, she has been exposed to quite a bit of the outside world too – and is likely also a carrier. If Intimate contact is not a requirement but just an accelerant, what are the odds of a wave of mysterious stripes-like sickness spreading from those who treated her?

Addendum –
Dr. Kasai notes that a ‘healthy’ fire dragon has easy ways to treat disease via flashpoint. What about other dragon types? Do Light dragons, such as those that ‘helped’ with Lumina’s memories and thus spent prolonged time with her, have similar quick treatment options available? It does not sound like they normally leave to deal with tigers in the wilderness the way other elements do. And Earth dragons… we know three who were very much in the field just now, and one of them very nearly had an intimate encounter of their own; is there an earth-exclusive curing technique? What if one of them is not ‘techncically’ still an Earth dragon at the moment? So many questions!

All great points! Regarding the symptoms, if you’ve ever come down with just about anything, you know that many ailments, both common and rare, have overlapping lists of symptoms. Consider the similarities in symptoms between the flu, COVID-19, and anthrax poisoning, for example. Sometimes, there are just one or two telltale signs that it’s one specific thing, but aside from those telltales, it could any number of ailments with common symptoms. Thus, symptoms like what’s Cinder’s exhibiting–headache, a sore and scratchy throat, nausea and vomiting, weakness–could point to any number of things, but having all these symptoms show up so fast and immediately after intimate contact with a Tiger, those last two characteristics point to a case of the “the stripes.”

And regarding Dragons treating illnesses, we’re getting a taste of how Fire Dragons do it, and we’ve seen Nurse Shynen cleanse the infirmary by bombarding it with ultraviolet light. Perhaps the other Dragons races have their own ways to deal with these things, or perhaps some, as Doctor Kasai put it, have to rely on more “unrefined methods.”

This story is so rich with lore, as an artist trying to build up my own world this is really inspiring ^-^ keep up the good work!

Ahh… toxoplasmosis! Thought it might be something like that. Initially figured allergies, but I guess doing *that* with a tiger could logically expose one to toxoplasmosis. Probably has much different effects on dragons (barfing and fever) as opposed to humans (crazy cat lady syndrome).

I’m really curious about this idea of “flashpoint”. It’s been mentioned a couple of times in relation to the dragon’s healing arts, but doesn’t go into it too deeply. Can you maybe elaborate on the idea a bit?

I could, but Nurse Shynen can explain it better. She’s a medical professional, after all. ^__^ Check out page 454 in the archives! https://www.draconiachronicles.com/comic/page-454/

Ah, I’d forgotten about that page! That is a good explanation. But how did Kilani keep from getting her tender bits burned during num-nums?

Saliva might be combustible, but only if flames or sufficient heat are applied. Gasoline doesn’t just magically ignite when left alone, after all. ^__^