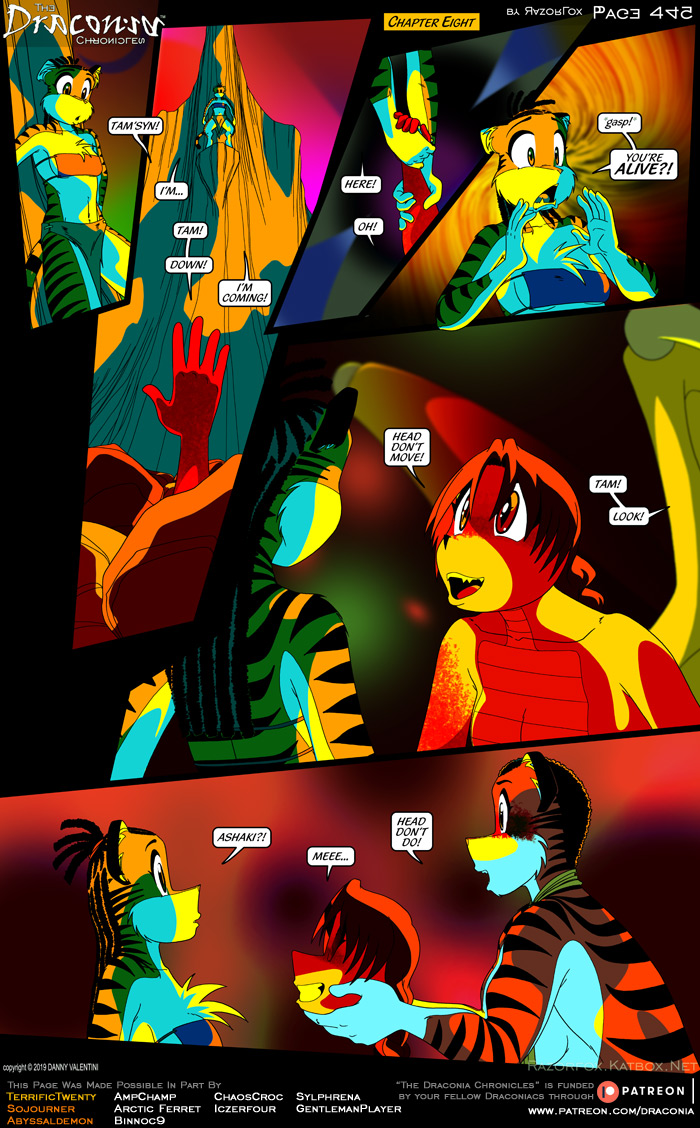 Welp, my little break is over and Chapter Eight is upon us.  Has Tam’syn found some lost souls?  Stay tuned…

Whoooaa, I really like this intro page. Really sets the tone for Tam’syn’s dream, where things don’t quite make sense but if you squint they actually do. Gaia and Ashaki are trying to tell you something, Tam, you best listen.

Yes, but what could it be? Hmmm…

Wow tamsyn is in the spirit world it is good to see gaia and ashaki I missed those two.

It was really fun to draw those two again! ^__^

Correct me if I’m wrong but is this the first time we’ve seen this type of vision power before? I could imagine it being the Tiger equivalent to dragon magic just not as wide spread between tigers.

We last saw something like this waaaaay back on page 18, published 14 years ago. It was a story element we’d planned on making a recurring thing but it didn’t pan out that way. Figured I’d give it another go. ^__^ Check it out at http://razorfox.katbox.net/comics/comic-18/

well that certainly is quite the call back. maybe this time Tam will actually figure out what vision Kilani meant way back when.

I am every possible kind of confused.

Speculation/Theory/Hypothesis time, with complimentary word wall.
Kilani told Tam’syn in her first vision (Page 18) that she would know what to do when the time was right, referring on how to achieve peace. This current second vision shows her helping a dragon (Gaia, now oddly sporting a red right arm) free herself from under some rubble. Could be a symbol that Tam’s helping her from death, in freeing her from the earth covering her.

Tam exclaims that Gaia seems alive. Gaia, seemingly in a good mood, with no physical marks other than her lack of horns, responds “Head don’t move” which could mean she’s ‘alive’ in that her spirit is still bound to her head, and in “Head don’t do”, when Tam’syn is being handed Gaia’s head by her sister Ashaki (who has the burn on the side of her face where Inyx electrocuted her), both with a smile on their faces (Gaia’s much larger), could mean that Tam’syn needs to reunite the body with the head, so the owner of the Head can ‘do’ something, since a head can’t do anything on its own.

Which leads me to a possible conclusion. Kilani in the first vision said Tam’syn would know what to do, and the second vision has Ashaki giving her something to do, which is the means to peace Kilani said. Gaia, in whatever form she returns, is a, or the key point to ending the war, along with Tam’syn, being able to communicate with the other side.

Thanks. Took a bit of mind-bending to fit everything together.
Just a bit of afterthoughts:
Tam pulling her out of the earth (freeing her spirit) and being given the task of putting her together again (reforming her physical form) might lead to a literal resurrection for Gaia in the end. (Uniting body and spirit) Loessa/Luasa has been needing a new champion since Meta was forcefully cut off. Tam’syn on the tiger side, Gaia, back whole, on the dragon’s. Could show the goddess’ dual nature with two champions for peace.

You have entered the Twilight Zone
Beyond this world strange things are known
Use the key, unlock the door
See what your fate might have in store
Come explore your dreams’ creation
Enter this world of imagination…

Weird, very weird. This dream or vision remind me of some movie about aztecs. In that movie to protagonist in dream comes warrior of his tribe with cut out heart and holding it. And while heavy breathing this warrior says only one thing “Run” cue invasion in the village of protagonist in real world. I still consider this scene disturbing and this page clearly remind me of it.

But what this vision says indeed? Maybe this is intervention of powerful entities or may Tam soon open in her unusual powers for tiger? This truly begin turning tide to very interesting side.

Is shit about to go down? Stay tuned…

In a few days. Just another Thursday to our furry and scaly friends, though.

I know, right? It’s like we just had the fourth of July a year ago. I think they might be trying to make that date an annual thing from now on, and I’m glad, because without it, July 5th can’t happen and then time just stops.

Wow, It seems like this dream is a bit more harder to understand if it’s another vision.

But Kilani wasn’t dead back then. While Gia and her sister are. If this is a vision, does this mean the living and dead have a hardy time conveying ideas to the living in it? Or whatever is trying to tell her something is limited by the state of the mind they’re trying to communicate with?

Kilani’s still quite alive… for now. We’ll see how she fares when morning comes.

Oh…great start to the month! ;w;

After page 444 gave us a dream come true, now we’ve got a nightmare on our hands!

What is it with tigers and smoking the heavy stuff? Can’t stick just ANYTHING into the peace pipe these days…

Tigers don’t have drugs to have trips Jarek neither something for smoke. Even dragons not have any, but they have wine to get drunk. It’s ironic a bit, in universe where we have massive bloodshed people don’t have alcoholics and drug addicts.

Man…this is one trippy dream. Nice touch enhancing that feel with the logo, title and font page.